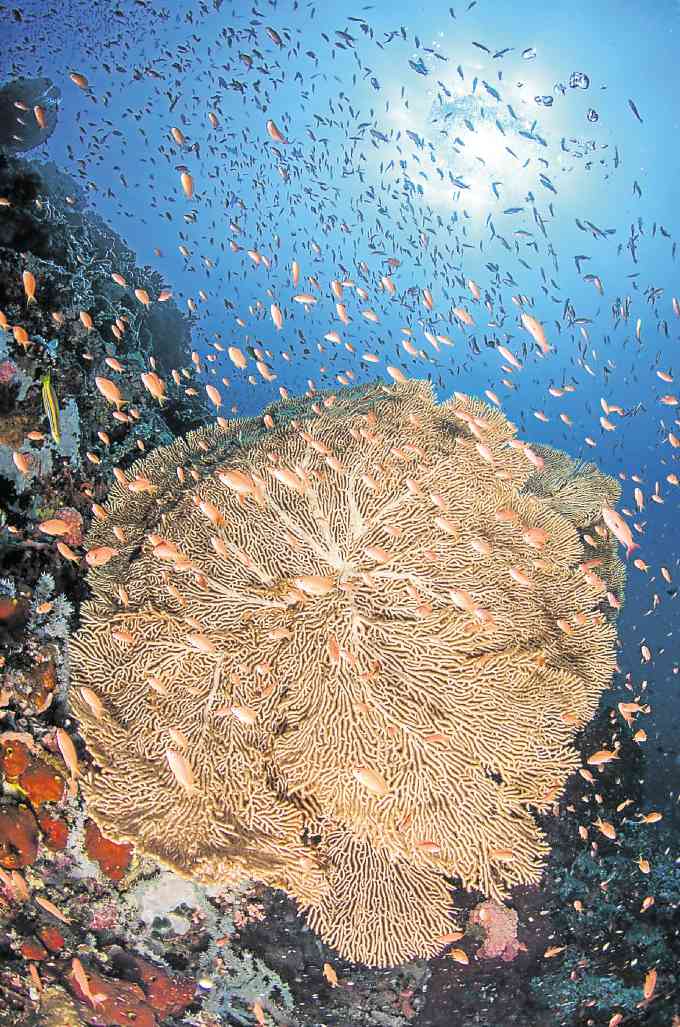 Colorful anthias adorn a Gorgonian seafan along a dropoff in Isla Verde, Batangas.

Where the Pygmy Seahorse and Wonderpus play

My fascination for sea creatures started when I was young. I saw my first bow-riding dolphin somewhere in the Visayas Sea, when my family would travel between provinces by ferry to visit relatives.

In my ancestral hometown of Bohol, I learned why jellyfish should be avoided while snorkeling in a nearby wharf or pantalan.

I spotted my first pipe horse nestled within the pier’s rocky walls.

But it was not until 15 years later, in Anilao, where I would begin my love affair with the ocean. I took up scuba diving lessons.

Anilao is a barangay in the municipality of Mabini in Batangas, but the name is commonly used to refer collectively to  several dive sites around the Calumpang Peninsula and the Island of Tingloy. Before I started diving, I had never seen that much reef fish without the distraction of any artificial landscaping you usually find in “Open Ocean” aquariums. All that was between me and Nemo was a few layers of water.

I decided, right then and there, that I needed a good camera to do justice to the underwater scenery.

What started as a hobby quickly became my life’s passion. I did not realize back

then how fortunate I was to

be within only a couple of hours’ drive from Anilao. Despite its close proximity to Manila’s pollution, Anilao is known as one of the best places on earth to find some of the rarest sea creatures.

A “bucket list” animal, if you will—no less special than spotting the Big 5 in an African Safari, only hundreds of times smaller. Take the Pygmy Seahorse, for example, a species of seahorse that lives within the polyps of the Gorgonian Sea Fan, adopting both the color and texture of its host. They are no larger than a grain of rice, and require the trained eye of a dive guide to find.

On the sandy underwater slopes of Secret Bay in Mabini, Batangas, one can find the Wonderpus—a species of octopus that was named only in 2006, and can be identified by its psychedelic body pattern.

It is no accident that Anilao hosts such a diverse population of marine life. The Philippines is part of the Coral Triangle, a 5.7-million square kilometer region of ocean that spans across six countries. The Coral Triangle, recognized as the underwater equivalent of the Amazon Rainforest, is the global epicenter

of marine biodiversity. It is home to three quarters of the world’s coral species, five of seven species of marine turtles, and 3,000 species of fish, including the largest and smallest of them all.

Anilao, with other popular dive destinations such as Puerto Galera and Apo Reef, is within the heart of the Coral Triangle, in a body of water known as the Verde Island Passage or VIP. The VIP connects the Batangas coast with Mindoro and the West Philippine Sea. Scientists have recently discovered that half of all fish species in the Philippines can be found in this sea corridor, with possibly the largest concentration of coral species in the world.

The Verde Island Passage is our crown jewel, and it is under serious threat.

The more time I spend capturing underwater images, the more I witness it changes year after year. Coral reefs are dying, schools of fish are disappearing, and large predatory species (an indication of a healthy ecosystem) are nowhere to be seen.

As a photographer who is witness to this heartbreaking reality, I am struck with a sense of urgency to share the ocean’s beauty before it disappears. The small fishing wharf I swam in in Bohol eventually became a mooring for a power barge, an offshore floating power plant that was needed to satisfy the growing town’s electricity demands.

In Anilao, a resident school of Jacks (locally known as talakitok) that was always spotted in a marine sanctuary called Twin Rocks even before I learned to dive, has not been seen in the last two years.

The Verde Island Passage, which also happens to be one of the country’s busiest shipping routes and fishing grounds, is under constant risk with surrounding developing areas such as Lobo, Batangas, where a proposed gold mine threatens the supposed ecotourism zone with cyanide runoff.

But does the economic impact outweigh its ecological value?

Admittedly, the tourism industry has provided a sustainable source of livelihood to communities around VIP. All over the country, we are appreciating the long-term benefits of marine conservation efforts. In Tubbataha Reef, a Unesco World Heritage site in the middle of the Sulu Sea that is supported by the dive industry, the protected area serves as a critical fish and coral nursery that sustains fish stocks in neighboring islands.

Meanwhile, as global populations grow steadily and demand for ocean resources increases, we inadvertently create undue strain on marine ecosystems. Biodiversity plays a major role in sustaining life, and whether we realize it or not, our own survival depends on it.

It is in our nature to protect that which we love, and it is not hard to fall in love with the ocean. “The sea,” Jacques Cousteau once narrated, “once it casts its spell, holds you in its net of wonder forever.”

In many ways, a photograph is a record of a moment in time that has passed. I photograph marine animals, not just for the purpose of preserving my memory of my encounters, but to remind viewers of the bigger picture—that the ocean and its inhabitants deserve to thrive.

Cookout for the VIP

On Oct. 22, at 5:30 p.m., the SEA-VIP will hold a fundraising event called “Cookout for the VIP” at Aiyanar Beach and Dive Resort in Anilao.