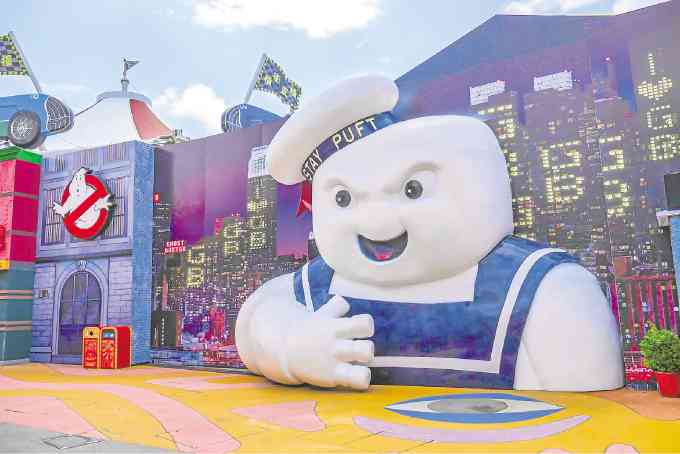 If there’s something strange in your neighborhood, who you gonna call?

Armed with a proton gun, you, friends and family can answer the call and patrol the city from the Ghostbusters’ HQ to subways and dark alleys to keep the ghosts at bay at Ocean Park Hong Kong’s Ghostbusters Live attraction this October as the park celebrates Halloween Fest 2016.

Hong Kong is one of the places where the celebration for all Hallows Eve is done with gusto. From costume parties to themed menus, name it, you’ll find something to your liking. And no place in China’s Special Administrative Region  embodies that more than Ocean Park Hong Kong.

For several years now the park has dedicated the month of October to a celebration of Halloween, in which guests get their scare of a lifetime. A recent visit to Hong Kong’s other theme park gave me a glimpse of what to expect.

Eight elaborate attractions have been put up around the park, including Ghostbusters Live. Covering all will be a job for the fit, considering the park is spread over 915,000 square  meters on three levels. But I can guarantee, regardless of your age, at least one or two of them will be to your liking, and may even make you scream even if you don’t want to admit it.

Youngsters, for example, will truly enjoy the Sugary Spook Village where they can gather candy, magnets and stickers as well as the Legendary Palace, which requires visitors to download an app that will allow them to catch spooks a la Pokémon Go.  By the way, after 6 p.m.,  phone apps disappear and the palace transforms itself into a scarier experience.

For the older kids in all of us, Club Blood, a hip rave bar run by a Vampire played by Taiwanese actor/singer/model Danson Tang, will not only appeal to his fans but also to those who have followed movies like “Blade” and “Underworld.”

I found the School of Shadows—in which you walk through a haunted high school with ghastly creatures and zombies popping out from lockers, walls, mirrors and any other location you would least expect—the most impressive. Be prepared to jump out of your pants.

But scary attractions are not the only things that have been spooked up.  Ghostly characters roam the park (complementing the wonderful sea characters we have all been accustomed to) for photo opportunities, not to mention creeping up on guests to give them a genuine scare.

As for food, the park has interesting menu items specially for the occasion.

If you happen to dine at the Ocean Café, try out the Ghostly Toilet of Death, which is a flavorful Tomato Ox Tail soup served in a mini ceramic toilet.  I asked what that was all about, and was told that, in Hong Kong, there is a common fear of toilets.

For the main course,  get the Biology of the Damned, a platter composed of beef striploin, chicken cordon bleu, chipolata sausage and roasted chicken presented as a human corpse complete with a ribcage made of bread. There’s also a vegetable seafood pate to double  as the brain. Sounds unappetizing,  but they’re all tasty good.

If you’re looking for visually appealing fare, get the Ghostbusters Feast at either the Tuxedos or Neptune restaurants, highlighted by a charcoal bun burger and a seafood spinach puff dressed up following the movie’s theme.

While Halloween Fest is its main attraction for October, Ocean Park’s other offerings are not to be forgotten.

As an animal conservation center, the park has several animal attractions that rival those found in the United States.  From goldfish to sharks to penguins and giant pandas, the park has them.

And for an additional fee, arrangements can be made for a close encounter with dolphins while they take a break from their shows.

And for those looking for a different kind of scare, there are thrill rides that will surely get a scream out of you.

Ocean Park is located on the southwest side of Hong Kong Island near the districts of Aberdeen and Ap Lei Chau.  For most visitors to Hong Kong,  this side is pretty much a mystery, with the exception of Ocean Park and probably Stanley which is known for its restaurants and open-air market which is a great place to find souvenirs and gifts.

Staying for a couple of days away from the city center has revealed some interesting finds such as Repulse Bay, known to many as the exclusive residence of the wealthy in Hong Kong.

It is also one of several beach destinations on the island that offer an escape from the hustle and bustle of the nearby concrete jungles of Central and Kowloon.

There is also Ap Lei Chau, a quiet urbanized district and a great shopping location with the Horizon Plaza and its 28 floors of outlet shops and the Prada Outlet located a few streets away.

As for accommodations, L’Hotel Island South is just a short distance from the park—a 10-minute walk to the entrance of Ocean Park.

The 435-room hotel is one of the biggest in Hong Kong, with tastefully decorated contemporary rooms complete with all the amenities needed for a short stay.