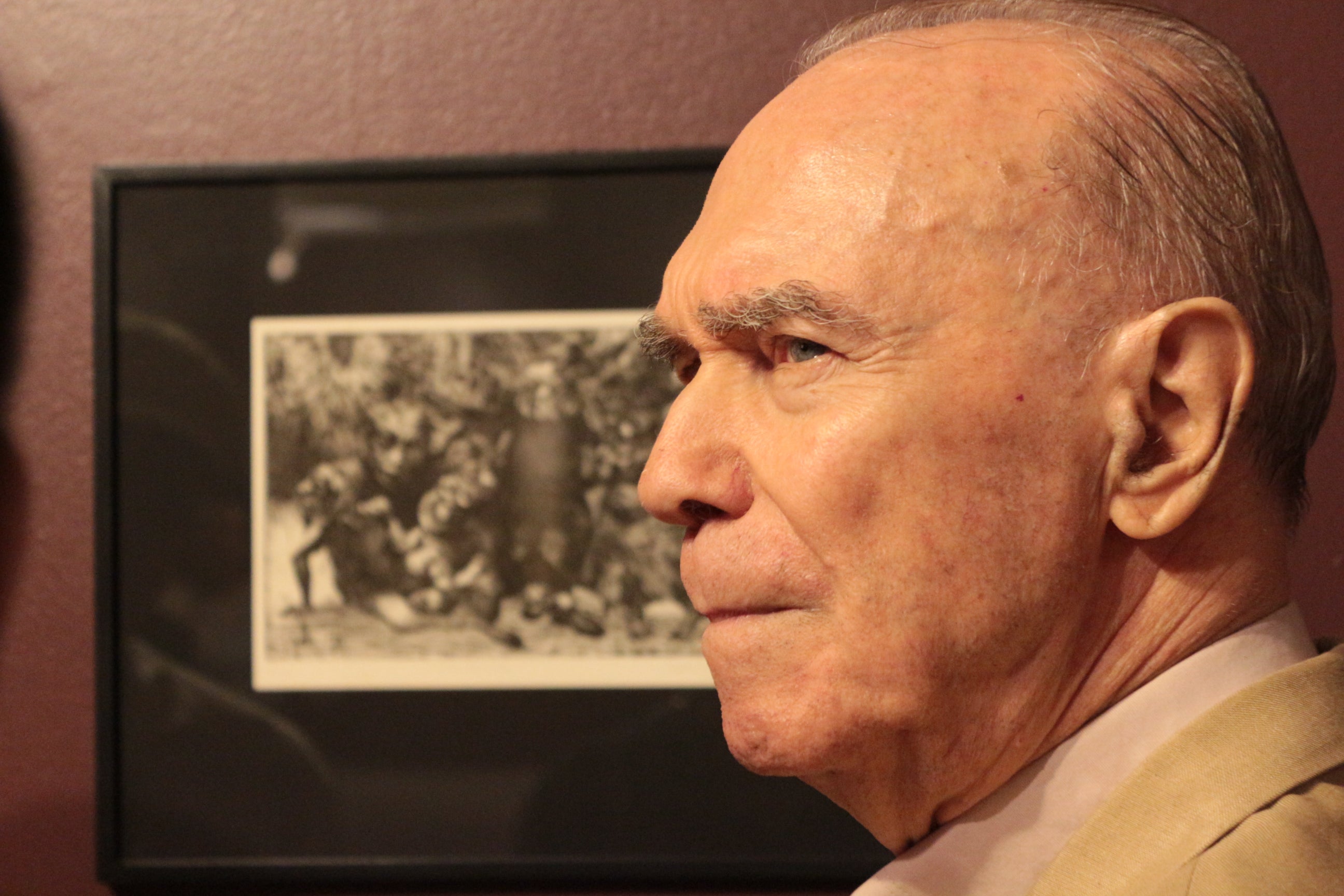 JUVENAL SANSÓ: Sorcerer of the canvas 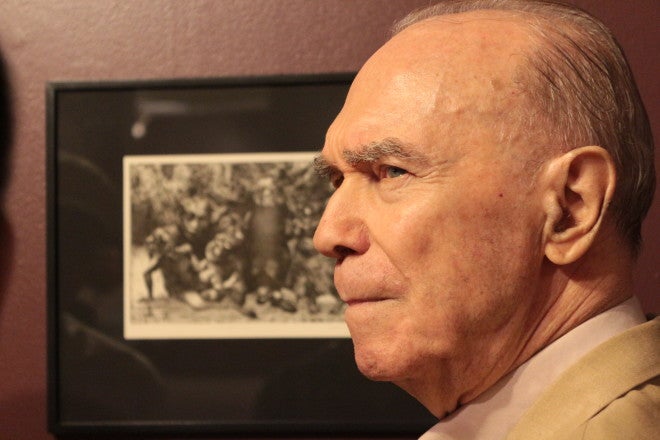 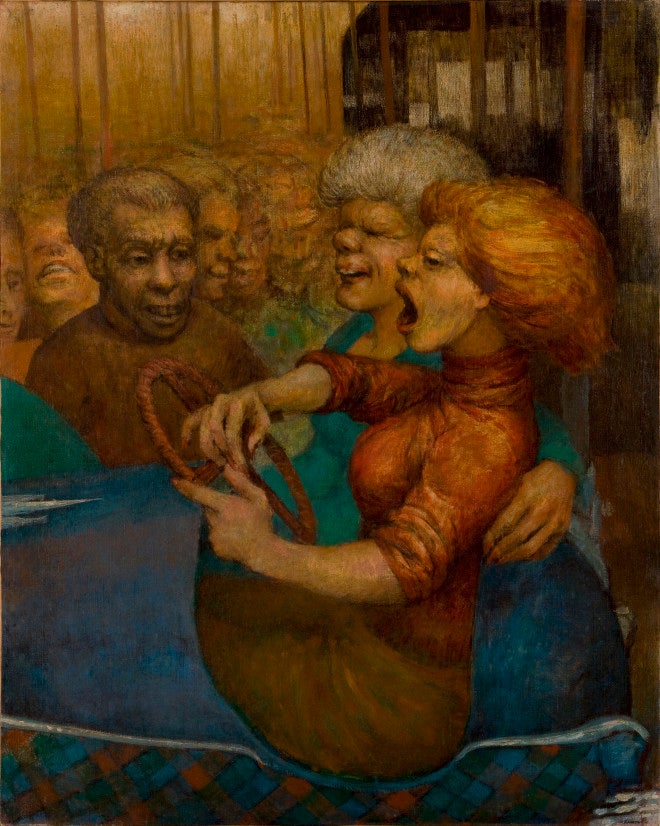 The gallery-goers among the millennials probably have seen only Juvenal Sansó’s fantabulous flowers and regard his work as art décoratif, better suited for the sala to match with the curtains and upholstery.

Had they seen his works in the 1950s, they’d marvel at the transmogrification from grotesque achromatic faces into floral bouquets bursting in neon hues. Or at images of rock formations on the coast of Brittany crawling on the canvas like a colony of aphids.

This is the sixth in a series of seven retrospective exhibits commemorating the Spanish-Filipino artist’s 70 years of art-making. (The seventh, “Tribute to Sansó,” opens Nov. 23 at Museo Sansó in San Juan City and runs until Feb. 29 next year.)

Curated by Ricky Francisco, the exhibit showcases 76 paintings and prints—46 from the museum’s permanent collection; 28 from Fundación Sansó; and two other loaned woks. It constitutes a visual narrative of the development of Sansó’s art and even hints at his biography.

Born in Spain in 1929, Sansó was five when the family relocated to Manila and established the wrought- iron business El Arte Es- pañol. He spent his boyhood in Paco.

The Sansós didn’t associate much with Manila’s Spanish community as most of them were Castilian and pro-Franco while the Sansós were Catalan and anti-Fascist. But Juvenal forged lasting friendships with boys his age, among them the future tycoon Henry Sy.

When war broke out, his father having refused to work with the Japanese, the family business was ruined. He started another by constructing horse-drawn buggies with car tires for wheels. They had to flee back and forth between Sta. Ana, Manila, and Montalban, Rizal, where they survived by planting eggplants and camote.

After Liberation, father and son plied the bombed-out streets in a homemade bus on the Sta. Ana-Quiapo route, with the son acting as conductor.

This sense of privations and ruin resulted in the Black Period Series, morbid imagery in black and white filled with distortion and deformity.

The trauma of war persisted and appeared even in Sansó’s brilliantly colored works, such as the suite of six Goyaesque portraits in watercolor, wax tempera, crayon and mixed media on paper.

His father had him take private art lessons thinking such training would help when he’d take over the wrought-iron business. The son persuaded the father that he be enrolled for special art classes at University of the Philippines and later at University of Santo Tomas.

That he had studied under Fernando Amorsolo and Irineo Miranda can be seen from his take on early Philippine Realism in such portraits as the two oil-on-canvas from 1950, “Old Woman” and “Girl,” the latter notable for its Amorsoloesque glow highlighting the face.

Early Social Realism, several years before it became trendy in the ’70s, appeared in “Neon Madonna,” a 1952 oil portrait in burgundy monochrome of a beggar and her child.

In the early ’50s, Sansó left for further art studies in Rome, then Paris, where he took up residence. He returned in 1957 to mount his first solo show in the country, and had been shuttling between Paris and Manila since.

“Paris Nude” is clearly a product from that time he was living in Europe. “Rome on the Tiber,” a 1952 oil, shows his art evolving, this time on the impressionistic stage.

The 1957 etching “Flower Market” he considers “the best that I have done in the Black Period Series.” The scene includes the familiar profile of writer-filmmaker Jean Cocteau, which the artist thought funny for putting him there. More remarkable is the central figure of a woman with six fingers, at which he was surprised he had given her an extra digit.

Among the most important prints here is “Moonglow,” an abstracted nightscape exhibited at Cleveland Art Museum in 1964 when its Print Club honored Sansó as Printmaker of the Year. Works by Salvador Dali and Pablo Picasso were also exhibited there that year.

Here are magazine reprints of his early award-winning pieces, “The Sorcerer,” in oil, and “Incubus,” in watercolor— both First Prize winners in the Art Association of the Philippines competition.

Here are representatives of the familiar “Baklad” and “Barong-barong” series of etching; “Parañaque Suite,” eight serigraphs on ochre paper depicting driftwood and twigs; “Bacoor Suite,” 1985 etching of boats on the coastline. These emerged from his stay around that coastal area of Metro Manila, just as the imagery of fabulous rock formations emerged from his stay in northwestern France.

Here, too, is the bizarre floral still life represented by “Flower Suite,” nine pieces of etching, lithograph and ink-on-paper.

The painstaking process of printmaking is demonstrated by “Two,” an etching of a pair of twisting slim tree trunks, here presented with the copperplate, four test prints, and the final piece.

In 1988, Lopez published “Sansó: Art Quest between Two Worlds” by Rod Paras- Perez, and spearheaded an exhibition. In gratitude, the artist donated 55 paintings and prints from his personal collection to the museum.

Copies of the coffee-table book with its variable jackets are displayed under glass in a vitrine.

Sansó belongs to the mainstream of international art. His works can be found in such institutions as the Smithsonian, Library of Congress, Museum of Modern Art, Metropolitan Museum of New York, Musée d’Art Moderne, the Achenbach Foundation.

In 2008, after 50 years of living in Paris, Sansó returned to Manila and established permanent residence in his adopt- ed country while maintaining a studio in Spain and Iran.

Now 87, he has received what must be the most important, most meaningful accolades in his life: the Presidential Medal of Merit from the Philippine government in 2006; Distinguished King’s Cross of Isabela from the Spanish government in 2007; and Chevalier de l’Ordre des Arts et des Lettres from the French government in 2008—the highest awards that could be given by the three countries that have nurtured him and his art.