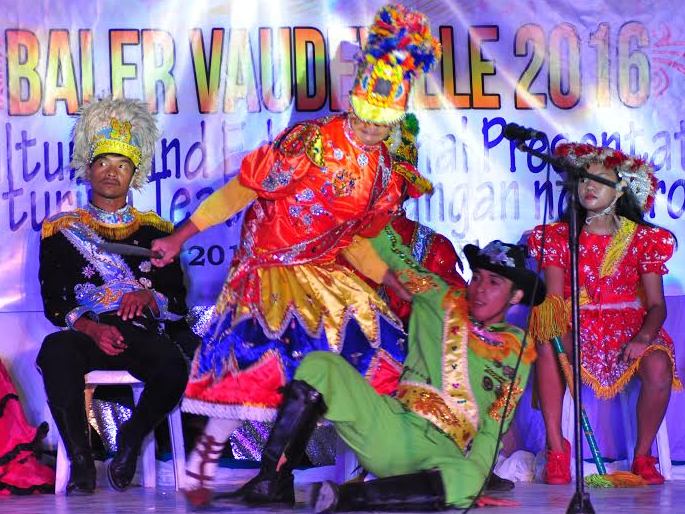 ‘Komedya’ in Baler, with real weapons

The capital town of the province of Aurora, Baler, lying beside the Sierra Madre and facing the Pacific Ocean, is one of the favorite tourist destinations in the North. It has a beachfront, surfing community, hotels and inns, a museum and a heritage church where Spanish soldiers made their last stand, unaware the revolution had long ended.

Baler is also the birthplace of Commonwealth President Manuel L. Quezon and his wife, Aurora Aragon.

Baler pulled out all stops to showcase its many talented youth. In fact, the two masters of ceremony of the cultural presentation were grade schoolers Justine Conde and Abby Angel Rivera, both aged 11, poised and confident in delivering their remarks.

There were cultural and sports events, poetry readings, folk dances and folk songs, native Pangkat Kawayan and rondalla music, creatively rendered street décor (with a religious-indigenous-environmental motif), choral music and a cautionary tale for the youth written by Frank G. Rivera), warning of the perils of environmental and drug abuse.

At night the lights were turned on in the street creations, many approximating a chapel or a bahay kubo (nipa hut), and these glowed in the darkness near the town plaza.

Theme was appreciating the past as well as native culture, but just to relate to the present there were lively hip-hop dance numbers by fired-up male youth.

The cultural presentation was directed by Rivera, one of the special guests.

The highlight of the cultural presentation was the “Komedya sa Baler (Moro-Moro) sa Entablado), rendered with great skill by the members of the Teatro Kalinangan ng Aurora and using real bladed weapons. As with all moro-moro plays, there was loud martial music, marches, battle formations, lively choreography and stylized steps, colorful costumer, and clashes between Christians and Moros (although the revival of the komedya no longer emphasizes this, being politically incorrect.)

It was a tale of war between two kingdoms; there were 14 combatants, three of them women. Fights broke out, with the weapons dangerously close to the faces of the antagonists. The knives and the swords met, emitting a sharp sound, and some of the women in front of the stage screamed. The conflict was intense, and one almost feared that some of the actors might be harmed.

Peace was attained and one thought this was the end, but no. Now there were duels, and when one combatant fell another took his place, and the fight continued. And it was like this until the play ended on a harmonious note.

One of the program hosts noted, “We children should not imitate this as the ‘Komedya sa Baler’ should be done only by professionals.”