The finest fruits of the vine favored by Filipinos | Inquirer Lifestyle ❮ ❯ 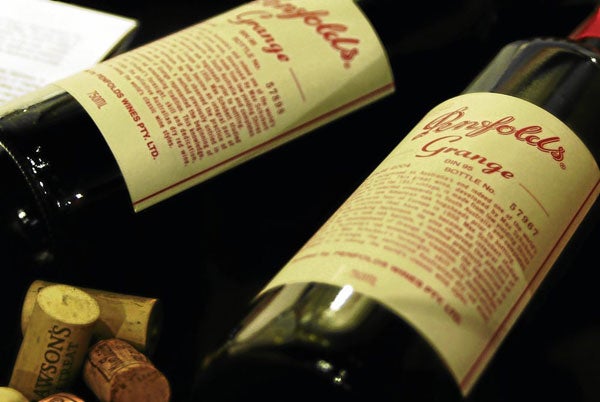 The finest fruits of the vine favored by Filipinos 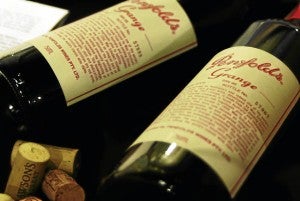 A story is told that, in 1989, New York wine merchant William Sokolin tried to sell a bottle of 1787 Château Margaux for $500,000. It was from the newly discovered caché of Old World wines believed to have been owned by Thomas Jefferson.

Without any taker, the bottle Sokolin took to a dinner at the Four Seasons, and it somehow knocked against a table and broke. Someone reportedly leaped onto the carpet and slurped the precious liquid. (Sokolin claimed the insurance money.)

The story is hysterical, the stuff of urban legends. But could a California or Australian wine, for example, generate the same frenzy in oenophiles? Maybe in the next century. Or possibly in the next two decades?

French wines used to be the apex of fine taste. Italian wine, then Spanish, later California, and recently Australian were considered cheap wines, or—most pernicious—merely table wines to wash down the flavors of food, not to be enjoyed on their own.

In fact, anything New World then was held with suspicion or contempt by prissy oenophiles. But look at them now.

Chilean wine is becoming as fashionable nowadays as the writings of Roberto Bolaño. Penfolds Grange, which revolutionized Australian wine-making, has become one of the top collectibles, described by an auction catalogue as “a wine of extraordinary dimension and power recognized as one of the most consistent of the world’s great wines.” 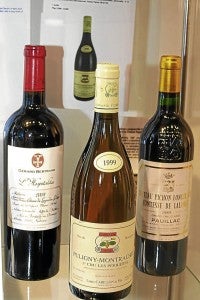 Says an information sheet: “Today an Argentine Malbec, an Australian Shiraz, a California Pinot Noir and an Italian Nero d’Avola can all taste very much alike. An Italian Primitivo can zero in on an American Zinfandel in style. And some Burgundies and Rhone reds show distinct California accents.”

In olden times, our ancestors had long been imbibing assorted fruit wines, but it has only been three decades since we took to the fruit of the vine. This is partly because there are only three wine-making countries in Asia—China, India and Thailand—as only they have the proper terroir that allows the cultivation of the right grape varietals.

“Wine-drinking among Filipinos started maybe 30 years ago, when wines such as Blue Nun became popular,” says James DuVivier, managing director of Future Trade International, one of the country’s leading importers and distributors of alcoholic beverages.

“It is a fairly recent thing,” agrees wine expert Julius Labrador Jr., president of The Wine Steward. “It became big in the 1990s, pushed by importers. I know people who picked it up and in one year they were really into it. I think it helps a lot if you have disposable income. Younger people are more open to the wine experience.” 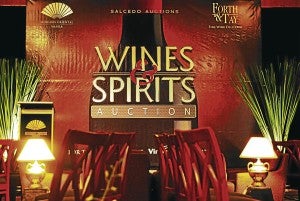 The drunken rhetoric of wine-lovers notwithstanding, taste cannot be dictated. A Filipino wine aficionado may rave over Château Lafite Rothschild Pauillac (aroma of anise, flavors of dark chocolate and mint), but deep inside he is hankering for something closer in taste to sweet spaghetti (comfort food of his childhood). Wines that are sweetish are the most popular with Filipinos.

Says DuVivier: “The Pinoy market likes fruity and full-flavored wines. This type or style is best represented by the New World wines. Thus the popularity here of US and Australian wines such as Hardy’s and Mondavi. Merlot is a favorite because it has a round, rather soft fruitiness and low tannins, suitable to the climate in the Philippines.”

Labrador explains Filipinos prefer Australian wine not only because it is cheaper but also because it is more fruity—just the right flavorful taste they want in their food. And also German wine, as it is very light in alcohol content, perfect for our climate, perfect for Asian food.

DuVivier couldn’t agree more: “Let’s not forget that taste is very personal. An expensive wine doesn’t always taste better. If you like it, then consider it quality wine. Our experience at blind tasting is that, while people can immediately tell an inexpensive wine, they can hardly distinguish a premium wine from a medium-priced wine. The most expensive wine is usually too complex to understand, so you gravitate to the middle and prefer a wine easier to understand. And when you like what you taste, you are usually willing to pay much more than what it costs.” 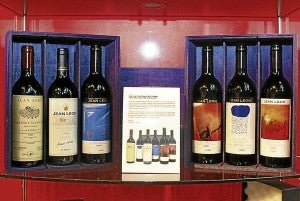 A Scot, DuVivier came to the country in 1984 and relocated here in 1987 to head the local manufacturing and marketing company of International Distillers & Vintners.

In 1999, he put up a cigar bar in Makati serving malt whiskey, spirits and fine wines, called Forth & Tay (derived from the two main rivers running through Scotland, known for the quality and pureness of the water, the lifeblood of whiskey).

The first of its kind in the country, the establishment has since been transformed into a direct-to-consumer retailer of fine wines and spirits in Metro Manila, with a portfolio of over 300 brands from nine countries in five continents, and over 20 grape varietals, with free delivery service within 24 hours (e-mail [email protected] or call 8281067 or 0917-5599841).

In late March, Forth & Tay collaborated with Salcedo Auctions and held at the Mandarin Oriental Ballroom the first wines-and-spirits auction in the country. DuVivier says it took them six months from conceptualization to auction day.

The evening started with the tasting of over 100 wines from 12 vineyards in eight countries. This was followed by the auction of 50 lots from both the Old World and the New World, plus some surprise lots.

“The wines and spirits that were auctioned off were those not readily available on the market, especially in terms of vintages,” says DuVivier. “We also had some bottles signed by the wine-makers, which made them collectibles. The wine had to have a very high rating by experts and authorities, such as Robert Parker of Wine Advocate or Wine Spectator.”

Most of the bidders were in their 40s, about 80 percent of whom foreigners. With 50 of the 62 lots sold, it represented an 84-percent clearance rate.

Part of the proceeds went to the Virlanie Foundation, an institution working in the past 18 years to prevent physical and psychological abuse of streetchildren. 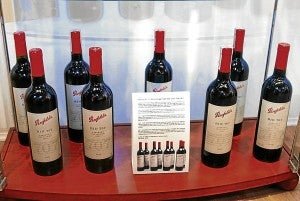 Delighted by the success of the auction, DuVivier says it was “definitely the first of many auctions to come.” It is going to be an annual thing, with a projected next schedule in September.

Says DuVivier: “It is clear that while the Philippines is a relatively young market, there are more and more connoisseurs and budding collectors looking for good bargains of stellar wines and spirits.”

So, are we sensing a seismic shift in the history of Filipino drinking habit? How soon can we be seeing sari-sari stores mixing their stocks of beer and gin with wines?

Labrador says the easiest way to educate Filipinos on wine culture is through wine-tasting. “The education part is very important. Restaurants should be open to food-and-wine pairings so people can taste wine in the right environment, in the proper setting. That’s how it should start.”

DuVivier says wine education can be either on-premise or off-premise. “We have training session for restaurants. That’s our job.”

He says the wine market has been growing by double digits in the past six years—partly on account of the restaurant industry, which now offers more wines at competitive prices—and this will continue. That’s something to toast to.