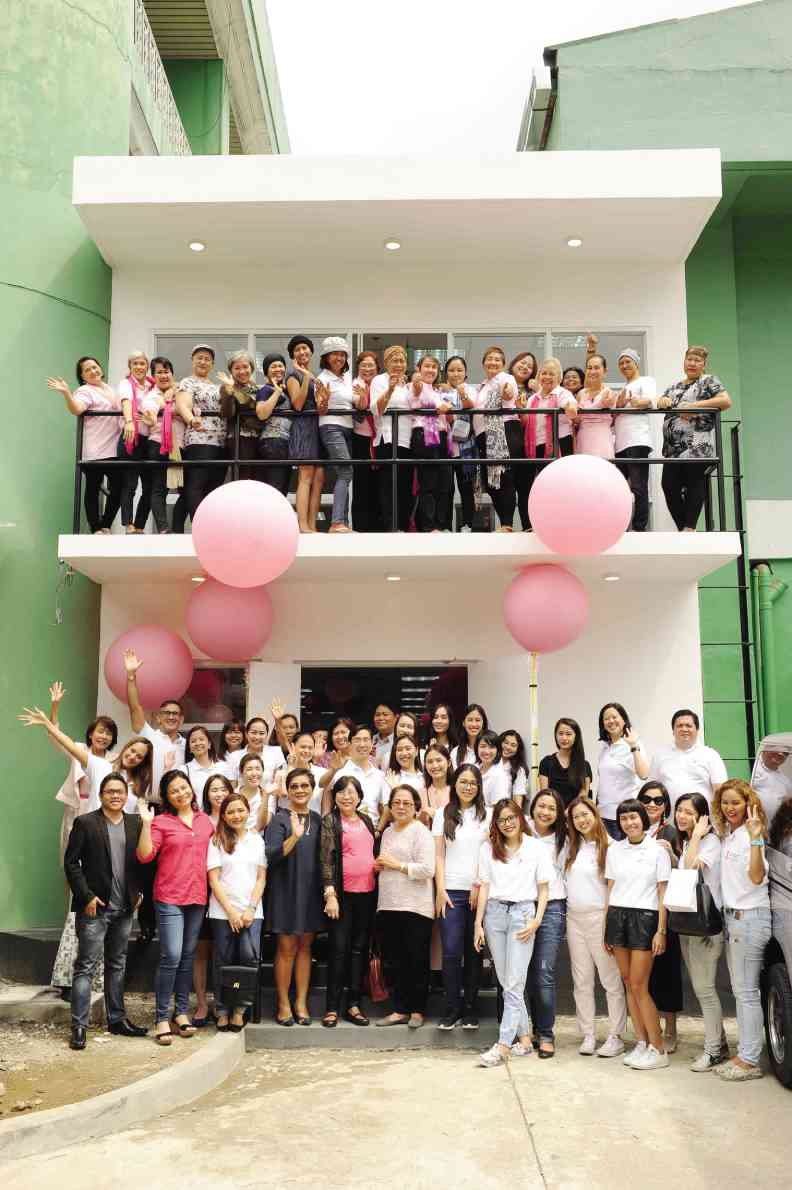 Partners from Pink for Life, Philippine Foundation for Breast Care Inc., Estée Lauder and The Peninsula Manila at the entrance to the Breast Care Center Annex

The Peninsula Manila builds on its breast cancer advocacy

The newly opened Breast Care Center annex at the East Avenue Medical Center in Quezon City is the culmination of four years of fund-raisers spearheaded by The Peninsula Manila.

At the conclusion of last year’s Art of Pink campaign, the hotel had managed to raise a total of close to P13 million in partnership with The Estée Lauder Companies for its chosen charity, the Philippine Foundation for Breast Care Inc.

Before its expansion, the government-run center served indigent women with breast cancer, who had to wait along with several dozen other women daily. Chemotherapy sessions then were administered with the patients sitting in one of two reclining armchairs, or they had to make do with a hard monobloc chair. Many patients would come from out of town to avail of these subsidized services.

The center now has a new wing and an expanded reception area. The second level will eventually house 20 brand-new chemotherapy infusion chairs; at the opening earlier this week, only five were as yet available.

Despite this, it was all smiles from the doctors and patients who had turned out for the opening. Wearing neck scarves in different shades of pink, some of the women sang the hymn, “Give Thanks” before pastor Joshua Galaraga of Victory Christian Fellowship prayed over Peninsula Manila general manager Mark Choon and Estée Lauder’s Imelda Lerma.

“In Southeast Asia, the Philippines has the highest incidence of breast cancer, with one in every 13 Filipino [women] falling victim to it,”  Choon said in a statement.

“As the general manager of an institution that is celebrating its 40th anniversary and has worked with various local organizations to help make a difference in the lives of Filipinos, I believe very strongly in the fight against this dreadful disease,” he added.

The Peninsula Group has been a strong supporter of the fight against breast cancer. Its properties in Hong Kong, Shanghai, Beijing, Bangkok Tokyo, Paris, New York, Chicago and Beverly Hills have been raising funds for six years now for their chosen charities.

“What we have in Manila is unique because here, you see the result,” Choon told Inquirer  Lifestyle.

“In other countries, the money is turned over to a foundation in charge of disbursing the funds.

I could come back in 10 years and know that the center will still be here, helping women beat breast cancer,” he added.

This month, the hotel has also collaborated with Chinese avant-garde photographer and multimedia artist Chen Man.

An exhibit of her works is on display at The Lobby until Oct. 31. The photographs will be available for bidding via an online auction from Oct. 10 to 24,  at paddle8/PeninPink with bids starting at P150,000 or US$3,000. Proceeds from the sale will be donated to the Philippine Foundation for Breast Care Inc.

The hotel has lined up other activities this October, which is Breast Cancer Awareness Month. There is a Peninsula in Pink ribbon pin priced at P250, where a portion of the sales will go to the Philippine Foundation for Breast Care Inc.; an Art of Pink Peninsula Afternoon Tea featuring rose-tinted treats; special themed pink desserts at The Lobby and Old Manila; and special pink-hued alcoholic and non-alcoholic drinks.