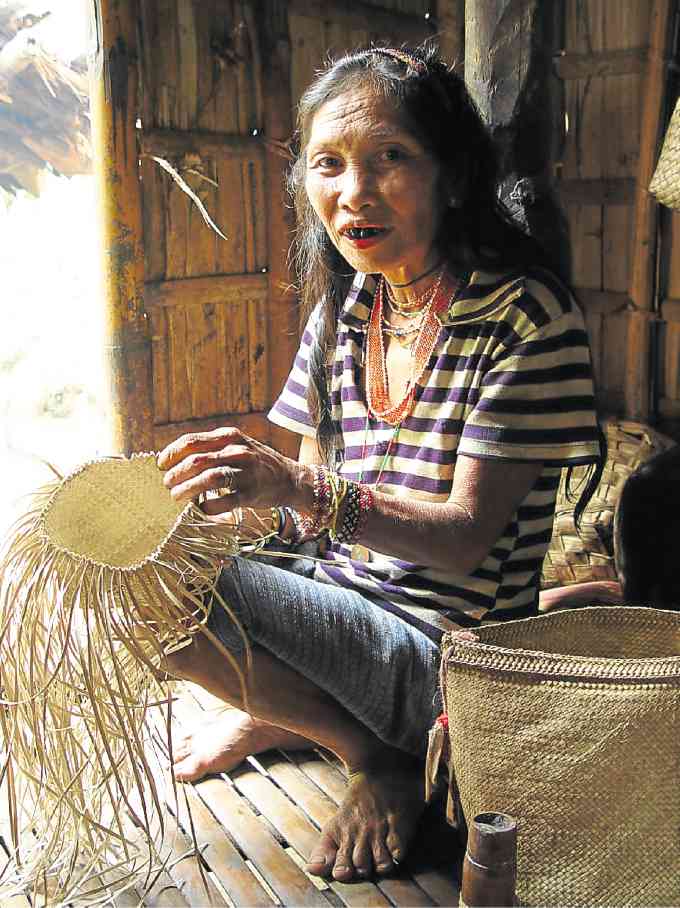 A Hanunuo Mangyan weaving a basket

Peace-loving—and proud to be Mangyan

For hundreds of years they lived unnoticed and unknown, eight Mangyan tribes in the mountains of Mindoro. They harvested rice, corn, bananas and wild yam, and bathed in rivers and streams. They enjoyed the wisdom of innocence and the courage of strong men. And while their customs differed, they lived in gentle harmony and never had tribal wars.

Their existence was first documented by a Spanish historian in 1571. Originally the only inhabitants of Mindoro, they believed in animism and good spirits, revered shamans and healers, and used esoteric herbal cures. As civilization closed in on them, they moved to isolated mountain tops in order to protect their survival, their lifestyle and their dignity.

In the 20th century, missionaries and volunteers worked among them, and were amazed to discover a simple life imbued with noble aspirations. Quint Delgado Fansler, a young idealist who was once with Jesuit Volunteers Philippines, says, “Their intrinsic values of honesty, generosity and hospitality exemplify the best of who we are. Our acceptance of them gives us a broader understanding of ourselves as a country, a more open patriotism.”

In this primal setting, the most surprising wonder is their use of language. While each tribe has a distinct idiom, the neighboring Hanunuo and Buhid tribes have a cryptic language used exclusively for poetic expression: the ambahan, a rhythmic verse with a meter of seven syllables. It is poetry that illumines the soul.

Ambahan sessions are organic, often going from dusk to dawn or over a weekend. Mangyans gather round, whispering, laughing, composing and chanting, much like an endless balagtasan. They build on each other’s thoughts and feelings with no ownership of the verses, only a kinship born of shared understanding and the light of intuition.

Ambahans are usually etched on bamboo poles and left outdoors to be read or passed on. The script is clearly precolonial and considered the most ancient Philippine text in existence.

Its recognition and significance came to prominence in 1958 with the arrival of renowned Dutch anthropologist and scholar Antoon Postma, who is singularly responsible for the scholarship in the preservation of this unique heritage.

Fansler says, “Culture changes. Heritage does not. The significance of Mangyan life is that it represents a living pre-Hispanic culture.”

Postma fell in love with Mangyan culture, its people, and a woman described as “eternally happy.” In time, they married and named their first-born Anya.

Beautifully Eurasian, Anya learned from her mother the unchanging customs and traditions of the Buhid and Hanunuo Mangyans: cotton spinning, weaving, textile design, beadwork and basketry. When textiles were hand-dyed with homegrown indigo, they used to be blue and white only. Now that threads are commercially acquired, clothing is more colorful.

About 10 years ago, Antoon and Anya traveled to the Netherlands. Already in his late 70s, it was Antoon’s last visit with his family. For Anya, it was a compelling adventure that opened her to a culture of refreshing vitality.

She says candidly, “I wish our young ones were proud of our culture and hold on to our traditions. Many are embarrassed that they are Mangyans, maybe because of other peoples’ low regard for us. This prejudice from fellow Filipinos really hurts.

“When I was riding a bus once, I overheard someone ask the driver, ‘Have you seen a Mangyan?’ as though we were some peculiarity. So I spoke up with dignity and self-respect. ‘I am a Mangyan,’ I said, and began to tell the passengers about the different tribes and cultures of my people. I had no apologies.”

It was precisely to address these concerns that the Mangyan Heritage Center was founded in 2000 in Calapan, Mindoro. Emily Catapang, a culture worker from Tuguegarao, was appointed executive director of this research center with its library, archives and traveling exhibitions.

“They’re a peace-loving people,” Emily observes. “Family togetherness is deeply valued. After the initial harvest of rice and corn, they wait to be complete before the first meal is served.

“Elders settle every dispute and in many tribes, elections are held with the use of leaves. For example, if a candidate is represented by mango leaves, his voters bring mango leaves to the general assembly. Until a few years ago, before electricity and TV, even petty crimes were rare.

“However, changes are happening. Now birth certificates are issued, while as recent as a generation ago, age was calculated by the number of harvests since one’s birth. Secondary schools teach Mangyan script and the native language, as well as Tagalog and English. Clearly there is progress, but a sweet contentment is also disappearing.”

Mangyans have been dancing with the winds of happiness and ease for hundreds of years. Today, one questions whether life seen through the lens of materialism is, in fact, progress.

At a time when national treasures must be preserved with sensitivity and expertise, the Mangyan Heritage Center actively supports the ambahans and lifestyle products that showcase this unique tradition.