A poet on a motorcycle | Inquirer Lifestyle ❮ ❯ 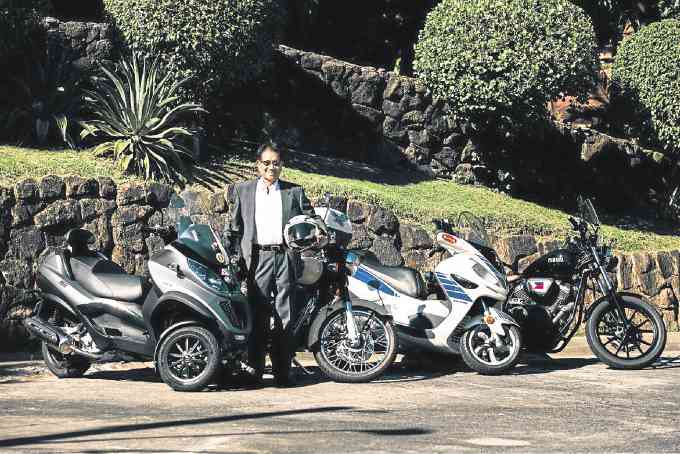 YUZON with his two wheeled fleet: “When you’re riding you have to stay in the moment, you can’t be thinking of other things or you’ll get in an accident.”

A poet on a motorcycle

Virgilio “Gil” Yuzon was more than halfway through the ride of his life—an epic, cross-country motorcycle journey from the northernmost tip of Luzon to the end of Mindanao—when the unexpected happened.

The retired advertising executive was descending on a twisting mountain road in Leyte when the brakes on his BMW R1200GS locked up, sending him flying over the handlebars and landing him hard on the ground.

It dawned on him, during the two-and-a-half-hour ride on the back of a pickup truck to Tacloban, where five doctors were on standby to patch him up, that he had landed perilously close to the edge of a ravine, a fall which he could not have survived.

As it was, he was lucky to have walked away from the accident with just five broken ribs, and over P350,000 worth of damage to his bike.

After such a close call, a lesser man might have quit riding altogether.

Just a few weeks later, after his ribs had healed sufficiently, Yuzon was back on the bike.

He had to sneak out while his partner, Sylvia, wasn’t looking, but he was riding again.

Sometime later, he wrote a poem titled “Life is a Motorcycle Ride.”

“Life is an uncertain adventure,

And so is a motorcycle ride.

But whatever either brings our way

We embrace, and take it all in stride.”

Ten years after the accident, Yuzon has published a collection of his musings in verse, mostly inspired by riding, titled “Poet on a Motorcycle: A Wild Ride of Varied Poetry.”

“I’m 75, but I don’t think 75 as long as I can do new things,” he says. “If I have two or three or even five more years, I plan to do all the motorcycling I can do. Because after that, if I can’t do it anymore, at least I cannot say that I didn’t do it.”

Yuzon rides every day, sometimes just around the village where he lives, sometimes a longer jaunt through Daanghari or to Tagaytay, and occasionally on a group ride with his club, the BMW Owners Society of Safe Riders, though the BMW R1200 has since been sold, replaced by what Yuzon considers a more age-appropriate Ducati Scrambler, an 800 cc. do-it-all motorcycle.

Although he has been an ardent sportsman all his life, having been a track athlete, a martial artist, a practical shooter, a tennis player and golfer at various times, Yuzon discovered motorcycling fairly recently.

Yuzon bought himself a 150 cc. beginners’ bike and enrolled at the Honda Riding Academy, where he was at least twice as old as most of his classmates.

“I said I needed a challenge,” he recalls. “I didn’t want to lose my reflexes.  That was the initial impetus. But when I started riding out of town with friends, I discovered that I really liked it. It was the exhilaration of the ride.”

Part of the appeal of motorcycle riding for Yuzon has to do with its salutary effect on one’s thought processes.

“It clears my mind,” he says. “Let’s say you have a lot of problems and issues; when you ride, they disappear, and when you get back you also have your equanimity back. When you’re riding you have to stay in the moment, you can’t be thinking of other things or you’ll get in an accident. That’s also what we teach in the martial arts—you have to empty your mind. When you’re in the present moment, you’re more aware and you react faster.”

If motorcycling is a recent passion, writing has been a more enduring one.

He was born in 1941, just as the second world war broke out.

His father, Amado Yuzon, was considered the leading poet in his hometown of Guagua, cradle of the Capampangan literary renaissance.

The elder Yuzon, who was named the country’s Poet Laureate in 1959, counted the likes of Rogelio de la Rosa and Diosdado Macapagal among his friends, and had been a member of the postwar Congress.

His mother, Fortunata Aquino, was a younger sister of Benigno Aquino Sr., which makes Ninoy a first cousin.

“My father came from farmers, my mother came from hacenderos,” he says. “I grew up with my father writing poems, but he was more known abroad than here.”

Amado Yuzon had founded the United Poets Laureate International in 1961, with the ideal of “world brotherhood and peace through poetry.”

“I think I got the idea of writing poetry from him,” he says. “I was exposed to it even when I was small. My father named me ‘Virgilio’ after [the Latin poet] Virgil because he wanted me to be a poet. I wrote my first poem when I was 13.”

Having obtained a college scholarship from the Ateneo de Manila University, Yuzon eventually graduated with a degree in economics.

But the creative urge remained.  Eventually, he would find the ideal combination of creativity and sufficient monetary rewards in advertising.

He would spend the next 30 years immersed in running the agency, retiring in 2000 after a sterling career in the industry.

“When I retired, that’s when I published my first book, ‘Glimpses of Love, Life and Beyond.’ I’ve always been a philosopher and a poet at heart. It never left me, and I wanted to develop it because I didn’t want to fall into the same trap as many of my colleagues, who just became engrossed in the material side of life.”

His late-life discovery of the motorcycle resulted in his third book, “Poet on a Motorcycle.”

Apart from riding and writing, Yuzon also keeps himself busy with the modest foundation he has set up, the V.A. Yuzon Foundation, through which he sends deserving students through school. It is his way of paying forward, both he and his father having been educated through scholarships.

Whether riding one of his bikes, writing haikus, or raising funds for his scholarship program, Yuzon’s enthusiasms have kept him vital where many his age are simply marking time in the pre-departure lounge, as it were.

A clue to his outlook might be found in the Latin quotation that prefaces his latest book: