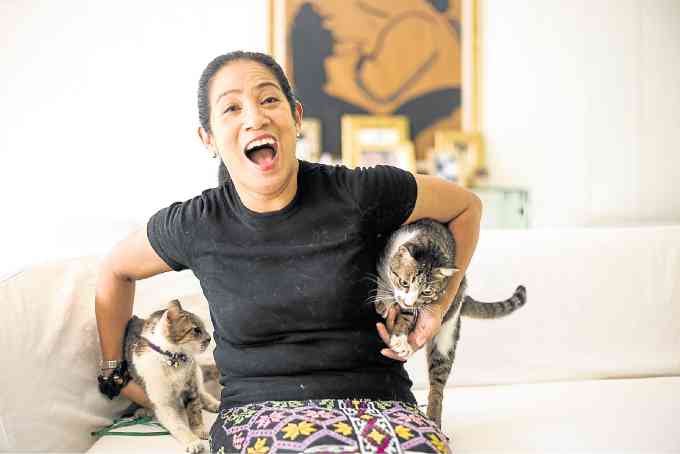 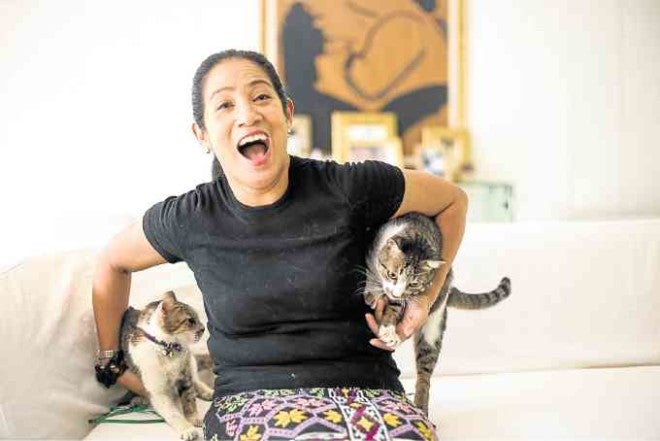 My whole family doesn’t understand what I see in them,” says Margarita Fores, as she lovingly looks over her litter of cat rescues, each having taken over a piece of furniture in the chef-restaurateur’s Makati home, eyeing the strangers—this writer and the photographer—with much suspicion.

Used to dogs that are, almost always, angling for a pat on the head, even from strangers, we approach to greet the four “Chinese emperors”—Pu Yi, Kuya or Ming Yi, Ping Yi and Pong Yi. Each one skitters away.

One manages to scratch the photographer’s hand and draws blood when he steps too close to take a photo.

Fores and her Araneta cousins grew up around dogs. Her maternal ancestral home, Bahay na Puti in Cubao, to this day, is filled with much-loved canines.

Until the last couple of years, she had never taken care of felines, which are often aloof and mistrustful, the complete polar opposites of the affectionate dogs nurtured by her family. She took them off the streets, near her restaurants, by her home’s doorstep.

“My family freaks out [around my cats]. My son doesn’t get it,” she adds with a laugh, cuddling Ming Yi, in the process covering her black tee in cat fur.

Asia’s Best Female Chef of 2016 is used to it. Like other cat and dog lovers, she considers pet hair on her clothes a badge of pride and honor. Her home décor has also given way to kitschy cat knickknacks, gifts from friends.

“They’re such a stress relief,” she says of her cats. “I’ve been spending more time at home because of them.”

Another chef and longtime dog lover, Sau del Rosario, is under the spell of cats, all six of them. The way he gushes about his felines now, even he would never have foreseen a few years back.

He took in his first kitten, a Himalayan, with much reluctance and incredulity. “I’m the sporty type. What would I do with a cat? I won’t be like a ‘cat lady!’” he told his manager, who gifted him Magnet, the alpha in his litter, about five years ago.

Pretty soon, he was rescuing kittens off the streets, bringing them into his home to join his lone dog, Mojita, a Shih Tzu, who, he says, thinks she’s also a cat since she grew up with Magnet.

He even adopted one in Boracay, who followed him to his resort-hotel while he was on birthday holiday last year; the hotel owner thoughtfully shipped Bory to him to Manila.

“They’re like my children. Of course, like any parent, you have a favorite, but I try not to show them,” he says with a laugh.

And like a doting parent, he describes each of his cats’ special and distinct qualities: Magnet flushes the toilet; Snowy “talks”; Missy the Persian is “minsan malambing, minsan masungit”; Fely is “grouchy”; Chiquito is “super malambing”; Bory, being a stray, has “no manners” and is his home’s wrecking ball who bullies the others.

“Cats are calculated and moody,” he says. “But they’re very neat and clean. They’re also quite independent so they fit my busy lifestyle.”

Cebu-based Edwin Ao grew up having a love-hate relationship with cats. With much irony, the fashion designer, who takes care of four Siamese and two Persian cats, used to “torture” strays when he was young, pulling their tails and driving them off his house’s roof. “Nanggigigil ako sa kanila!”

In 2003, he bought a female Persian and a male Siamese in the naïve thought that they’d breed a Himalayan. They’ve since multiplied, their spawn Ao has gifted to designer friends Ivarluski Aseron, Joey Samson and Jojie Lloren.

He spoils his six rotten. They’re “sobrang takaw” and are fed four times a day. In turn, the six are his “stress busters” who like to sit on his lap and sometimes sleep on his chest. “When I nap, they’re all waiting by the door when I get up. They’re smart and can open doors.”

Catwalk goddess Marina Benipayo, meanwhile, found Kitiket at her doorstep two and a half years ago, dirty and so skinny she thought the kitten would die. She brought the stray to the vet, where it was nursed back to health.

The veteran model decided to keep her, and has since made it her personal advocacy to have stray cats or puspin adopted.

“She was just outside, and made a home in our hearts,” she says. “That’s why I encourage people to adopt because cats choose their owners. I had Labrador retrievers, but before Kitiket we didn’t have pets at home. I didn’t hate cats but I avoided them since I have asthma and allergies. I ended up loving one to learn to understand them.”

Benipayo thinks Kitiket’s arrival was good timing, since she and actor-husband Ricardo Cepeda are now empty nesters. They take in strays, nurse them to health, then have them adopted.

Cats, she says, don’t need as much active attention as a dog might, which suits the model just fine. “I’m also an introvert, so I think I fit the personality. Cats are quite chill. When we lose a stray even after it’s been treated at the vet’s, I cry really hard, because unlike humans, they’re helpless when they get abused on the streets.”

Media and communication consultant Anjie Ureta gravitated toward cats while growing up, even as there were also dogs in her grandfather’s house.

However, “I didn’t really have one that was truly mine until I moved out to my own place and was gifted with a lovely Siamese whom I named Ananda, meaning ‘bliss,’” Ureta says.

“Ananda was my only home companion until she passed away last year at age 13… I cried for days! While I had started rescuing and caring for other felines by that time, she was my only indoor cat and I loved her very dearly.”

In Ananda’s place are now several rescues she found “at different times and circumstances, but what is common is that they all needed care.”

“Animals are not playthings or items you keep because they make you feel good,” she says. “If there’s any compelling reason I have gone out of my way to care for the ones that have been entrusted to me, it would be purely out of compassion…

“When I decide to take in rescues, I also take full responsibility. I bring them to the vet and make sure that they are all vaccinated, spayed and/or neutered. They are also registered in my barangay and have collars with tags. Since they are outdoor cats, I make sure they have some safe, open space to roam. They particularly like hanging out in my garden and patio.”

Ureta would rather not be classified under cat-loving stereotypes—independent and intelligent, but also introverted and standoffish, neurotic, and prone to worrying—“but I guess there is a logical reason you are attracted to certain kinds of pets more than others,” she says.

“Much like the way you choose your friends, right? You like being in the company of people with whom you share qualities. I suppose it’s the same way with pets. So yes, if I were reborn as an animal with most of my present traits, I would most likely be a cat!”