How I climbed to the Tiger’s Nest | Lifestyle.INQ ❮ ❯ 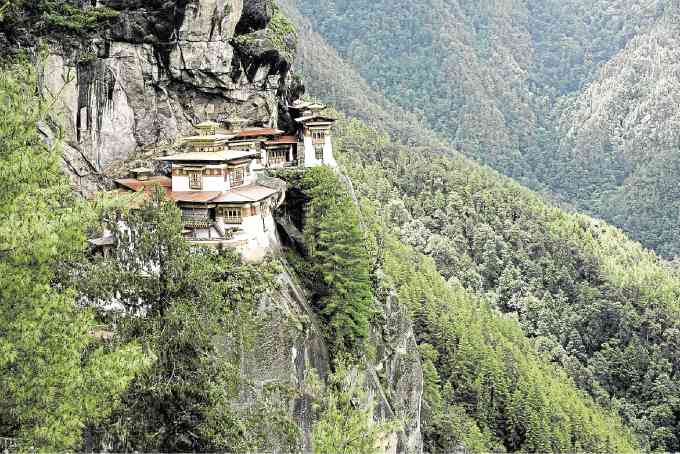 Tiger’s Nest, a perfect contrast to the gradients of greens

How I climbed to the Tiger’s Nest

A palpable peace is felt upon setting foot on Bhutanese grounds. We’re fresh off the plane after a day in transit, and Paro Airport is silent. The only sound is the baggage carousel as it clicks into action and delivers the luggage.

Photos of Bhutan’s King Jigme and Queen Jetsun are displayed on the airport walls and on the badges that the airport staff wear on their traditional kira or gho.

Immediately you get a glimpse of the respect the Bhutanese people reserve not just for the monarchy, but also for the limited number of visitors who are granted visas as part of their “high value, low impact” tourism policy.

It’s a country with much to offer for hiking and trekking, boasting an endless number of trails and paths to monasteries hidden in the mountains.

Friends back home would see our photos on social media and leave comments, telling us to “just breathe” and to “soak it all in.” And I could see why.

The air is clean and crisp. The twigs crunch under our feet on the hiking trails, as we stop intermittently to imbibe the surrounding views, watching the clouds settle deep in the forest. There is an element of elusiveness and secrecy to the trails we’re walking for harlan+holden’s Camino Challenge.

Bhutan fiercely protects its Himalayan summits. The highest peaks and trails are off-limits to humans; snow-covered mountains are considered sacred, and people are prohibited from climbing them. It is this discipline and dedication to Buddhism that allows a spiritual awakening in even the most religiously impartial.

This was the reason harlan+holden decided to launch its new Camino shoes in Bhutan. It’s all about a more profound sense of travel—with intention and purpose. Traveling to find more than you seek.

The trip allowed seven of us to take part in experiential travel—that is, to experience natural and spiritual highs in the context of nature—in the only carbon-negative country in the world.

You truly begin to get a sense of the journeys that the devoted Bhutanese take part in at the start of the four-hour trek to Tiger’s Nest Monastery (Paro Taktsang), or take the first step of a three-hour climb to the hidden Dodeydrak Monastery. Armed with a personalized carved wooden trekking pole that the Amankora Resort and harlan+holden provided, we mount our horses and embark on the first leg of the trek.

Each horse nonchalantly follows the preceding one, perilously nearing the edge of pathways, as we exchange anxious glances and peer down at the shower of pebbles falling below us. We each have a young man leading our horse, and mine is the sprightly Sonam, an 11-year-old boy who had already trekked this path for years.

Upon arriving at Tiger’s Nest, our incredible guide, Jigme, whispers to us to remove our shoes before stepping into the temple. We are greeted by cold wooden floors and the scent of burning incense.

The temple rooms are intimate and small, the monk facing the elaborate, colorful decorations and offerings surrounding their beloved statues. Jigme tells us stories of reincarnation and the temples’ history—how Tiger’s Nest burned down in 1998, most of the temple destroyed except for one holy statue, and was rebuilt in 2008.

Jigme remembers the monk who prayed for 27 years at the exact spot every day; we are invited to stand in the same temple and place our feet in the indentation left by this dedicated monk’s feet in the cold, aged, warped wooden floor.

This sense of appreciation intensifies when we are invited to sit with a group of monks over lunch at Dodeydrak Monastery, founded in 1779—essentially a university for monks.

The soft-spoken monks, some of them only five years into their 21 years of study, announce with a quiet confidence that we were sitting in the happiest place in all of Bhutan.

They are a humble people with an equally modest prime minister, insisting his country should be measured by Gross National Happiness instead of Gross Domestic Product.

It is a country that feels proud of its identity and its own rules. So dedicated are its people in preserving and upholding their local environment and predominantly Buddhist beliefs that you can’t help but be shocked when Jigme excitedly brings up the planting of 108,000 trees in celebration of the birth of the royal son—in the same breath as an update on “Game of Thrones” character Cersei Lannister, or a rundown of the Guns N’ Roses discography.

There are the traditions engrained in its national sport, archery, where women will sing and dance to celebrate tournaments. There are the stories of young children exposed to a new Bhutanese film and music industry—something the aforementioned “Game of Thrones” fan feels was lacking from his upbringing.

While the rest of the world struggles to keep up with globalization and the mess that is climate change, Bhutan is sinking its own feet even deeper into its culture and heritage, strengthening its foundation and deepening its roots.

We were incredibly moved by every facet of Bhutanese culture. The generous hearts of the people enriched our trip so much that on the day of our flight back home, we found ourselves embracing everyone at Amankora as we bid farewell.

You won’t really know how a place will affect you until it does.