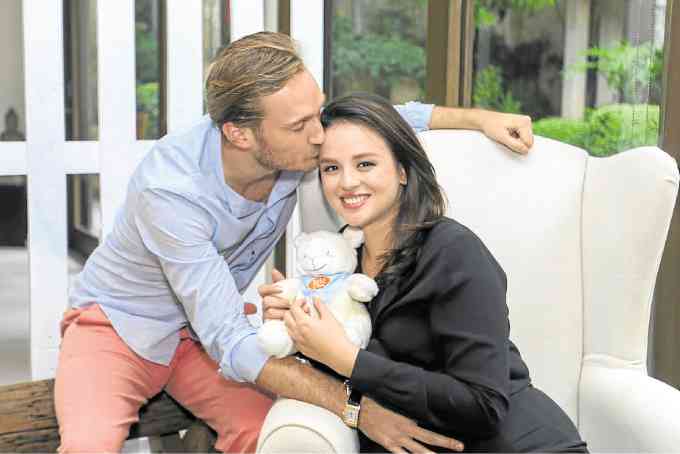 ‘Not at all,’ she said, when we asked her if pregnancy has been tough

It was a most casual, homey lunch last Wednesday without the glitz or high-wattage glam associated with “it” girls. But it was lunch, in fact, with Georgina Wilson, one of the “IT” girls of Metro Manila. Her baby shower.

It was in the home of Dr. Vicki Belo, the visionary doctor and marketing whiz who became the doyenne of the beauty industry, her enterprise ranging from beauty and aesthetic surgery clinics to beauty and personal-care products.

Belo was hosting it for Wilson, her brand ambassador, who’s about five months pregnant.

While the mom-to-be was having her hair done upstairs, dad-to-be Arthur Burnand, a most amiable banker, held court at the lunch table. A Briton who’s based in Shanghai, he was in town last week taking advantage of the holiday in HK.

The Burnands shuttle between Shanghai, HK and Manila.

He was having a convivial chat about his impending parenthood, with newlyweds Cristalle Henares and Justin Pitt.

As the three did domicile talk, Belo, the hostess, was busy offering the sumptuous dishes on the table, global fare indeed, from healthy Mediterranean to crispy pata. “Eh I knew we would be a mixed lot so I had the kitchen do a good mix,” she said.

In the meantime, Dr. Hayden Kho, Belo’s longtime partner, was busy attending to their daughter, Scarlet Snow, only 18 months but already an Internet celebrity, with about 300,000 followers.

Shortly, Georgina showed up, looking so fresh and with no makeup.

She was even prettier unmade up. She helped herself to the meats.

We asked her if her pregnancy has been tough. “Not at all,” she said.

In truth, she didn’t feel at all that she was already in the family way.

Except for her baby bump she didn’t really gain weight.

She and Arthur’s initial plan was to have a baby in two years, mainly because Georgina is so busy with her commitments. She has a show, “It Girls,” on E!

So, she said, imagine their surprise when she was doing her regular checkup, the attending nurse said, “Congratulations! You’re having a baby!” or something to that effect.

It took some time for Georgina and Arthur to settle down to the idea that on this their first year of marriage, they would be three.

Now that the news has sunk in, they are thrilled beyond words. It was so interesting how the two tried to share parenting tips with Belo, then with Kho. One topic: to spank or not to spank.

But Kho’s formula on that is another story.