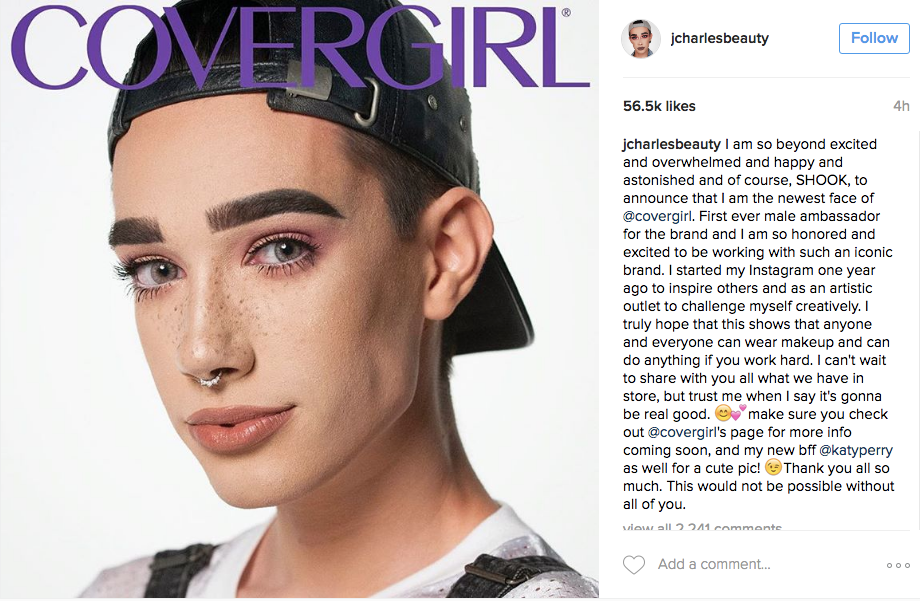 CoverGirl has made a historical legacy by appointing James Charles as its first-ever “CoverBoy.”

Charles, a 17-year-old make-up guru, was named as the cosmetic company’s first male ambassador and spokesmodel, and he will work with none other than Katy Perry.

In an Instagram post on Wednesday, he humbly expressed his delight to model for a reputable brand. “I am so honored and excited to be working with such an iconic brand. I started my Instagram one year ago to inspire others and as an artistic outlet to challenge myself creatively. I truly hope that this shows that anyone and everyone can wear makeup and can do anything if you work hard,” he said.

Charles and the “Rise” songstress will be beautifying eyelashes with the company’s mascara launch “So Lashy!” Also, they will be featured in CoverGirl’s future print, television, and online advertisements.

Perry also congratulated the newest CoverGirl fashionista in a touching Instagram post. “Just wrapped another CoverGirl shoot. honored to have the pleasure to announce the very first CoverBoy, James Charles,” she captioned her snap with Charles.

In an interview with Marie Claire last May, he opened up the time when his parents questioned his gender due to his fondness for make-up.

Charles, whose real name is James Charles Dickinson, was a New York-based high school student who made fabulous and flawless make-up tutorials on social media. As a result, he swirled headlines when his yearbook photo went viral on Twitter last month. Today, he has amassed 468,000 followers on Instagram and 72,600 subscribers on YouTube.  Gianna Francesca Catolico