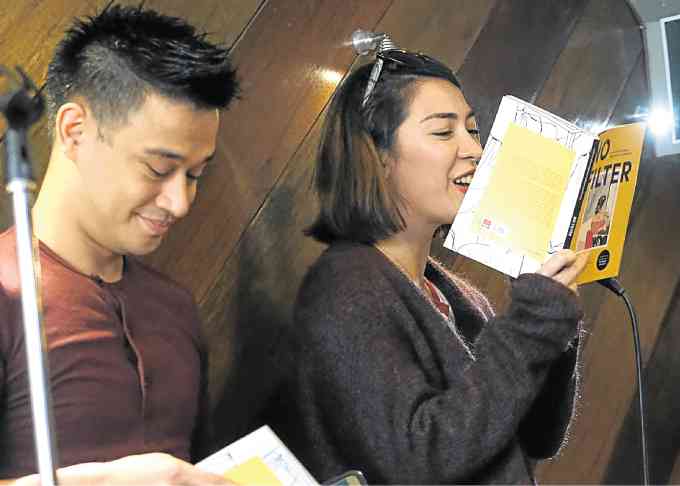 ‘No Filter’–the play is now a book

Do you remember your old self, the one who wanted to be an artist, writer, rock star or something else before you had to find a “real job” and make a living?

How about the times in your life when you were so drunk, so in love and so reckless? Do you absolutely hate it when, during family reunions, your aunts ask you when you’ll ever get married?

These are just some experiences that young people go through. They’re all over the place: millennials, caught up in managing their startups, being social media superstars, purveyors of the creative scene, pursuing that one dream. Millennials, who would rather answer to their own calling at their own pace and on their own terms, rather than compromise their passion for the sake of conforming to corporate standards.

They’ve been labeled as lazy, self-centered and entitled, among other things. Sadly, millennials are known for these less-than-desirable traits more than anything, never mind that they should also be applauded for the contributions of their generation—or that the people who labeled them just couldn’t find the time to get to know them better.

The Sandbox Collective’s “No Filter” and “No Filter 2.0” were essentially a series of monologues performed onstage. These plays became venues for millennials to do what many think they’re good at—talking about themselves.

Watching either play, one is given the total millennial experience; the monologues were written and delivered by actual millennials. All that whining, over their seemingly petty concerns, in a dark theater.

The monologues used in these plays, along with a few additional pieces that encapsulate the millennial experience, have been put down on paper and condensed in “No Filter,” the book. Reading it is a revelation, even for nonmillennials.

Reading it in your own voice, you realize that millennials share remotely similar experiences with people from other generations—the Gen X-ers, and, heck, even the Baby Boomers.

Even if millennials have different views on career and serving life’s purpose, they share the same pains and joys as everyone else when it comes to love, pursuing one’s passion, and making the most of one’s youth.

Actress Jasmine Curtis-Smith, who was part of the play’s cast, talks about her favorite parts of the book: “There’s one called ‘Coming of Age’ (written by Jam Pascual) that is about learning how to accept who you are and your point of view. The character of the monologue is, parang, ‘I’m trying to make you happy, but can you also be fair to me?’ We’re also a different generation, so understand us.”

She continues: “Then there’s ‘The First You’ (performed by Khalil Kaimo and written by Don Jaucian). It talks about how we get so caught up in all these problems, but then you go back to when you were a kid, when all that mattered was I wanted to be an astronaut, or a dentist or a doctor or whatever…”

In the ’80s, women in their 20s were generally expected to marry before reaching 30. A 30-year-old single woman was automatically seen as a probable spinster. These days, couples are delaying marriage in favor of other things: pursuing their careers, traveling the world, and conquering it.

Remarkably, there remains pressure from society for women to get married before “time runs out,” as if there was an age limit to getting married, and marriage was a prerequisite to a life well-lived.

Sab Jose’s “The Last One Standing” is one for the unmarried folk out there that aunties just can’t stop nagging about. It’s a tearful exploration of one’s feelings on being pressured into a lifelong commitment that she isn’t prepared for. It’s a piece that a woman, whether she’s 25, 35 or 45, can relate to.

“Love Me Tinder” by Luigi Gonzalez is, as its title suggests, about finding someone through the popular dating app.

Then there’s “Playing the Game” by Regina Belmonte, which talks about the repercussions of falling in love.

“Breakup Season,” also by Pascual, is, as one would expect, a heartbreaking read.

“The Interview” by BP Valenzuela and “That Nine-to-Five Hustle” are personal musings on finding a job and staying in one.

These are just some of the pieces that can be found in “No Filter,” the book, a collection of monologues written by 37 different people, including Marga Buenaventura, who is also its editor in chief. The contributors include writers, editors, actresses, artists, designers, and other young professionals, as well as musicians and a writer-turned-public servant.

Among the topics discussed are love, marriage, dating, breaking up, career, ambition, and pursuing one’s passion.

There are also pieces on wanderlust, moving out, becoming an internet star, friendship, adulting, feminism and fighting for what you believe in.

These are supposedly “millennial” concerns that, if you look closely, could be from anyone’s youth, regardless of age, gender, race or generation.

Millennial or not, you will find a piece of yourself—or at least your younger self—in the “No Filter” pages. You couldn’t finish the book in one day if you tried. There may be too many sentiments and emotions to deal with in one sitting. —CONTRIBUTED

“No Filter” is available on Summit Books.