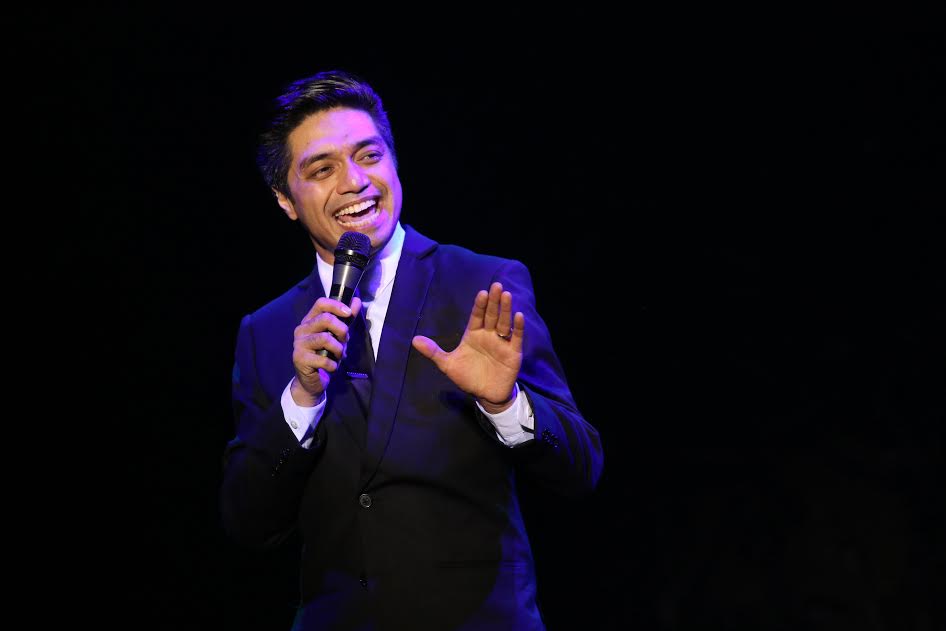 Volante went to see the show’s London production, watched the 2014 film directed by Clint Eastwood and listened to the original cast recording. —PHOTOS FROM ATLANTIS THEATRICAL

What does it take to be theater’s Frankie Valli, the frontman for the hit musical “Jersey Boys” whose voice can soar so uncannily high?

For Nyoy Volante, who leads the ’60s pop-rock quartet in Atlantis Theatrical Entertainment Group’s (Ateg) staging of the Tony-winning musical, it begins with an appreciation for and knowledge of a wide range of music—from kundiman to heavy metal to everything else in between, including doowop boy band harmonies.

To prepare for the role, Volante went to see the show’s London production. He also watched the 2014 film directed by Clint Eastwood and listened to the original cast recording. It’s all part of an effort, he said, to study what he cannot do with the role and how far he could push it.

And yet, he admitted, singing in Frankie Valli’s falsetto still felt funny no matter the research. There were as well the exhaustive casting efforts, which required him singing with numerous male auditionees “in different combinations over and over again to make sure we got both the correct sound, and also the proper dramatic impact the roles required,” as described by director Bobby Garcia in a previous interview.

[Related story: ‘Oh, what a night!’: ‘Jersey Boys’ to get a brand-new version in Manila]

Before Volante’s acoustic-pop fame and his inspired performance in “Jersey Boys,” which has been getting unqualified raves (the show is on its last weekend at Meralco Theater), there was stagecraft designer and dependable stagehand Niño del Mar Volante.

He had at the time relegated music-making as a hobby, with bar shows the only outlet for his laid-back, mellow singing and guitar-playing. Volante had instead set his sights on a career as stage and film director.

Backed by a Technical Theater degree from College of St. Benilde, he worked with prominent performance groups like Gantimpala Theater and Monique Wilson’s New Voice Company. He worked in lights, sound and production design, occasionally stumbling upon small directorial gigs.

Music simply kept knocking on his door. There was prolific composer and music producer Vehnee Saturno who, after catching one of Volante’s bar shows, offered an album deal right off the bat.

There were the bar owners who would promise to double his fee so he would come in for unscheduled gigs. Celebs and industry executives also flocked to his shows, and not just by coincidence, as he thought.

When Volante’s career as a solo pop artist took off, theater had to take a backseat. His early acting experience had not been encouraging anyway.

His lead roles were in school productions. His acting stint with New Voice, as Punjab in a mall tour of excerpts from “Annie,” was a brief stint, though it was a surprise offer from Wilson who happened to hear the stagehand singing while he was sweeping the stage.

There was also a spot in the ensemble for an Atlantis production of “The Rocky Horror Show.”

But when bigger musical roles started to come, what Volante lacked in experience he made up for with a willingness to explore and exercise other abilities. He would sink his teeth into diverse roles, the most notable of which, before “Jersey Boys,” was as the narrator-rapper Usnavi in Atlantis’ staging of “In the Heights.”

During curtain call one night, when playwright and Manila co-director Lin-Manuel Miranda was asked to join the actors onstage, Broadway’s rock star bowed toward Volante as a sign of praise.

“Oh my God, of course I didn’t deserve it,” Volante exclaimed. “I mean he was Lin-Manuel Miranda, but him doing it, siyempre tumatak na yun sa puso ko.”

Volante also loves portraying silly characters, including Grandma (alternating with Jimmy Marquez) in “The Addams Family” and the physically demanding Donkey in “Shrek.” He even did his own makeup for those roles.

“I take pride in making a fool of myself, sa totoo lang,” said the self-confessed clown of the family.

Of course, for Volante, being in theater has far exceeded the usual benefits, such as learning to be a disciplined professional.

He met his wife, actress Mikkie Bradshaw, in theater, and she has become his biggest and most valuable critic.

“She really tells me when I’m doing something that’s not right or might not work,” said Volante. “I believe her. That helps me a lot, na kapag meron akong ginagawang mali, nasasabi sa akin agad.”