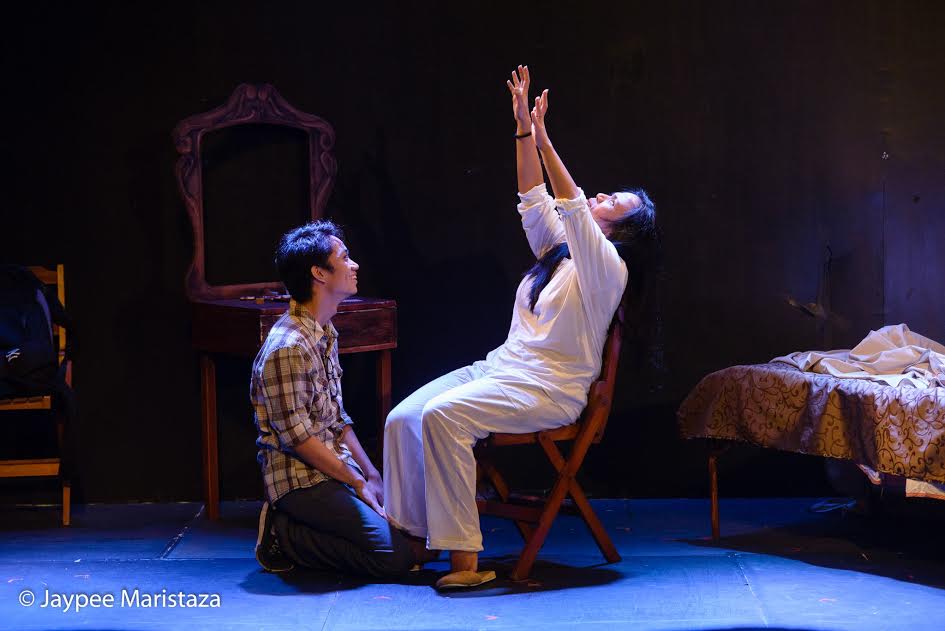 Give artists a good cause for creative ferment, and they’ll go to town with it.

Consider “Never Again: Voices of Martial Law,” the festival of nine one-act plays delving into that dark period in the country’s history, running on its last weekend at the auditorium of the little-known Bantayog ng mga Bayani  in Quezon City. Spurred by the government’s plan to bury the dictator Ferdinand Marcos at the Libingan ng mga Bayani, theater artists decided to add their voice to the public outrage in the best way they knew how: by using the stage to recall the trauma and terror of those times, and thus stand against the tide of historical revisionism.

The idea for the festival, and the invitation to some of the country’s most accomplished playwrights and directors to collaborate on the project, were firmed up only in August. But you wouldn’t guess that from the caliber of the plays presented, six of which are new and three previously mounted.

Staged with the barest of props on a small stark stage, the plays brim with depth, eloquence and conviction. On point of quality alone, this ersatz festival could very well hold a candle to the Virgin Labfest, the premier annual showcase of new one-act plays at the Cultural Center of the Philippines.

On social media and the airwaves, the festering issue of the Marcoses’ misrule, and their unrepentant stance 30 years after they were chased out of Malacañang, have devolved into a largely rigid divide. One is either for or against the Marcos era, and people can then be smug about their choice.

The first virtue of having artists and playwrights revisit those years is being presented with stories that explore, with fresh eyes and without easy sloganeering or judgment, how complicated, in fact, the situation was—how those times of tumult called for hard choices that were neither immediately craven nor heroic, but often merely human.

George de Jesus III sketches an affecting portrait of middle-class students struggling with the pull of their comfortable surroundings versus the call to arms—or whatever other form of activism is possible—in “Disco 1081.”

In “Sshhh,” Allan Lopez’s subtle dialogue meticulously peels off the veneer from a similar stratum. His educated, well-off characters think themselves detached from the violence outside by virtue of their class connections to Marcos’ new order—until the repression comes, first for one of their outspoken fraternity “brods” (a nod to Archie Trajano, who was found dead after confronting Imee Marcos in an open forum), and then for them as well.

Like “Loyalist,” “Ang Kasaysayan” is a sincere attempt at understanding the depths of Marcos worship among a still good number of Filipinos.

It is Chris Martinez’s biting “Thingy Or Ang Pak na Pak Ganern na Ganern sa Pakikipagsapalaran ni Melenyo, D’ Great Pokemon Hunter”—done in traditional tula-dula format that harks back to a pioneering form of ’70s protest theater—that delivers the necessary indictment of the older generations’ failure to teach the lessons of history to their millennial offspring.

Layeta Bucoy’s “Princess Lilli” takes up the case of another martyr, Liliosa Hilao, in an allegorical retelling characterized by its playwright’s tropes of visceral imagery and driving psycho-drama.

The most indelible story along this vein is Rody Vera’s “Indigo Child,” about a boy awakening to the buried horrors of his mother’s past in a military detention camp. Acted with harrowing, burrowing power by Skyzx Labastilla as the mother, the play’s treatment of fate and chance under unspeakable circumstances—and the wrenching question of whether to survive by erasing one’s memories, or to hang on to every lash for eventual cosmic justice—marks it as a profound new work in martial law literature.

Ramon Jocson’s 1989 Palanca-winning “Bulong-Bulongan sa Sangandaan” is an apt choice to round up “Never Again.” This story about restless denizens haunting the bowels of the Manila Film Center poignantly underlines both the injuries wrought on ordinary nameless citizens by martial law, and the ghosts that refuse to go away with the nation’s continuing inability—or refusal—to come to terms with that long dark night in its past.