I made my grandma use Tinder | Inquirer Lifestyle ❮ ❯ 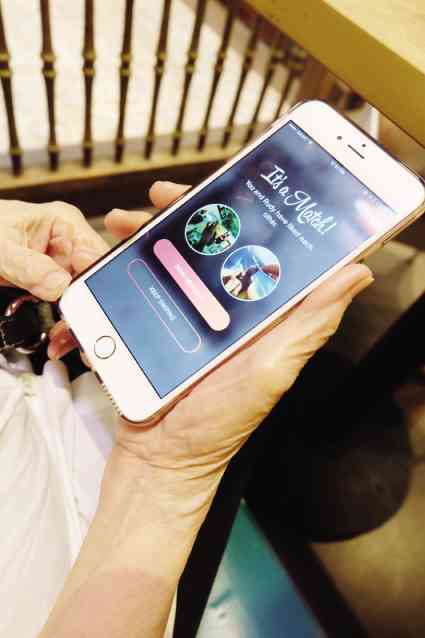 I made my grandma use Tinder

“Hey, what is Tinder? Educate me, please.”

This text from my 89-year-old grandma lit up my phone when I told her that since her fling with Pokemon Go was a bust, we were going to try Tinder next.

“The word ‘tinder,’ why did you use it in connection with dating? Maybe you are expecting fireworks to tickle your funny bones? Hahaha no tinder in my dating days! You know what, if I tell you of my dating days, you’d be snoring yourself to death… Yes, Virginia, those were sorry days for Lolo Osing and me!”

Days later, Lola and I sat at a comfy booth in Manam, with way too much food in front of us.

“I was reading ‘Modern Romance’ by this comedian Aziz Ansari and it talked about how people from older generations used to find love within a certain mile radius, often in their own neighborhoods. Like you and Lolo. Or my parents,” I said to her.

My grandma’s mother was strict, so strict that she couldn’t even look out their window. “Bawal dumungaw sa bintana, sasabihin nagbebenta ka ng sarili,” she said.

The only man she ever loved

The man she eventually married —my Lolo Osing—was not just a neighbor, he was a friend of her brother’s. He would go to their house all the time and my grandma found him annoying because he would track mud inside.

One night, Lolo Osing slept at their house and, on Lola Charit’s way to the kitchen, she bumped into him. “Buhat ulo hanggang paa nakuryente ako, my god. First time na naramdaman ko ’yun.”

He courted her and, six months later, they became a couple. But because her mother was strict, they were only allowed to see each other twice a week, at her house, on Thursdays and Sundays, from 6-8 p.m., while her mother watched them like a hawk. “We did that for six years.”

Some time during those six years, Lola and Lolo broke up and then got back together after a chance encounter inside a jeepney in Quiapo (“He still had my breakup letter in his pocket and he threatened to read it for everyone in the jeep to hear if I didn’t let him visit me.”). They got married after she got her degree in English—she was part of University of the Philippines Diliman’s first batch of graduates in 1951. “He fulfilled my father’s wish of letting me finish school first,” she said.

Lolo Osing was the only man she ever loved and she hasn’t dated anyone else, not even after he died in 1999. I asked her why and she said, “Hinahanap ko what I felt for him. Wala na akong makikitang tulad ni Osing.”

But on Tinder, we were going to try.

“This is Tinder, Lola,” I said, handing her my phone. “It shows you profiles of people and even shows you how near they are. Like this guy, he’s just 10 km away.”

Lola Charit looked at me and rolled her eyes like it was the most ridiculous thing she’d heard.

I eased her into the experience by letting her look at my profile. She critiqued each of my photos. “That’s nice… Pangit. That’s good. Okay ’yan, pensive.”

Then I showed her the guys’ profiles.

Lola Charit started wondering where these guys were coming from. “Ano ’yan, binili mo meron nang laman?” she asked, and I laughed.

We stopped at Michael, who claims to be 106 years old. “He looks funny, pwede na ’yan,” she said.

She reached out to tap the heart but changed her mind, going for the star instead.

“Lola, no!” I said, grabbing the phone from her. “The star is for Super Like. You get only one a day. If you Super Like someone, even if they don’t like you back, they will know you Super Liked them.”

Soon it became clear that Lola and I have very different tastes. “Gwapo yata ’to, ah,” she said.

She looked at a 26-year-old guy who was wearing sunglasses and said, “’Di naman makita ’yung mukha.”

“Are they real people?” Lola asked at one point.

Lola looked at Manfred, 26. He was laughing in his photo. “Mukhang masayang tao, may sense of humor,” she said. She tapped the heart.

“Lola, your first match! What do you want to say to him?”

I laughed and hit send.

She found a second match in Miko, 30, who she described as “Mukhang wholesome, parang good guy.”

“What do you want to say to him?” I asked, ready to type.

She hit X on Jon, 42. “Mukhang suspicious-looking,” she said.

When she found out a guy was a soldier, she swiped left. “Ayoko niyan, biyuda kaagad ako.”

But she changed her mind when she saw Andrew, 33, from the US Air Force. “Ang gwapo, ang tangos ng ilong.” Her eyes lit up when she saw him holding a cake. “He knows how to cook?” Swipe right.

She was also impressed by the number of dogs in his pictures.

“So it’s true what they say? It helps when guys have dogs in their pictures?” I asked her.

Dogs were a plus, flashy cars were not. “Ayoko, mukhang mayabang, naka-pose pa sa kotse niya,” she said about one guy in a convertible.

She seemed impressed by active guys, guys in the gym, guys on mountains, guys on bikes. “Uma-athletic ’yan, ah,” she kept saying.

She also used the photos to gauge a guy’s sense of humor. She kept saying things like “Gusto ko ’yan, nakakatawa. Or “He looks jolly.” Or “He’ll make you laugh.” Or “Mukhang comedy.”

Like me, Lola found it strange when guys use photos with other girls on Tinder. “Eh may girlfriend na ’yan, eh,” she said, swiping left.

Surprisingly, she wasn’t bothered by the amount of shirtless pictures on Tinder. She shrugged them off, saying, “I’m used to my brothers.”

If Tinder had existed when she was young, would she have used it? “Hindi. It’s corny. Ayoko nga ng ganyan. I want to meet people as people, hindi ’yung ganyan.”

And that’s a shame because, as they say, Lola’s got game. She’s kind of great at flirting.

She matched with Rudy, a 25-year-old guy who works as a second officer on a yacht. Her message to him? “I want to join you on your yacht.”

To Mattheo, a 42-year-old with a passion for big bikes, she wrote, “Let’s ride your motorcycle.”

To Manuel, 26, who seemed athletic to her because he had a photo in a gym, she said, “Let’s play together.”

As crazy as this sounds, I was hoping Lola could find a real match on Tinder but the guy closest to her age was a 58-year-old Colonel Sanders look-alike who posted a photo of himself wearing just boxer briefs. Lola took one look at him and said, “Wow, ayoko, ang laki ng tiyan.”

And so we went back to her matches, most of whom were 25- and 26-year-olds. “I made your grandma swipe me right? Damn, I’m smooth af…” one of them said.

“Would you meet with any of your matches?” I asked Lola.

She shook her head. “I don’t like meeting people na hindi ko kilala.”

“Are they real people?”

“Parang he’s worried about something.”

Number of people who replied: 4

Number of people who messaged her first: 4

Number of people she replied to: 0

Number of people she met in person: 0