In ‘Hinulid,’ Nora speaks in Bicol-Rinconada like the native that she really is | Inquirer Lifestyle ❮ ❯ 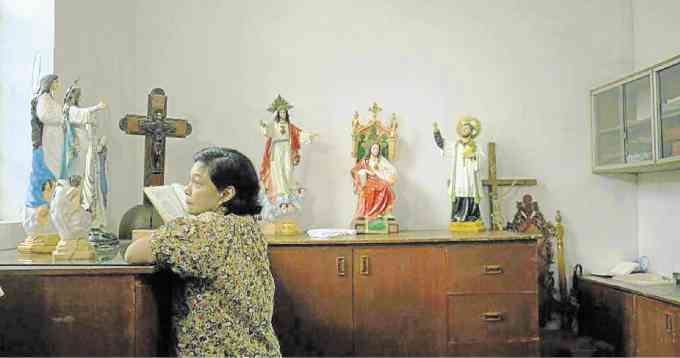 In ‘Hinulid,’ Nora speaks in Bicol-Rinconada like the native that she really is

It may be a bit presumptive at this time but the newest film, “Hinulid,” starring Nora Aunor may be the Superstar’s most important piece of work yet.

Her list of accolades may be long and the variety of roles she has played many but this film, from writer and director, Palanca winner for Literature Kristian Sendon Cordero, will be the first to have her speak in her mother tongue Bicol-Rinconada.

Aunor has been an Igorot in “Banaue,” a Badjao in “Thy Womb,” an Ilocano in “Ang Kuwento ni Mabuti” and a Waray in the film “Taklub.”

In “Hinulid,” which is based on a short story in English by the acclaimed Bicol Catholic writer Carlos Aureus, Aunor plays the role of devout Roman Catholic Sita Dimaiwat, who comes home to Bicol to cremate her son, a law student in Manila who died due to a violent hazing incident. As Sita makes her way back, she listens to a recording of her son’s voice as he recites his lessons in law.

In more ways than one, “Hinulid” is not only a passion project for Cordero but also a homecoming film for fellow Iriga City native Aunor.

“This film has to be made because the time for Bicol has come,” Cordero says. “The region is experiencing massive urbanization in some key cities—malls and call centers are coming in while the rest of the region remains poor. But we are very rich with our stories to share, stories of our struggles and defeats, our little joys and victories, our hopes and aspirations.”

“Hinulid,” he says, is a film that attempts to contemplate on tragedy and transcendence in the Bicol way. It attempts to weave together Bicol folktales and the current situation, to reconcile how Bicolanos endure and choose to live on despite being in the “singsing nin kalayo, mata nin bagyo” (the ring of fire and the eye of the storm).

“I hope that many of Bicol’s young filmmakers will be inspired and encouraged to do films about our stories as Bicolanos,” Cordero adds. “By doing films in and from the region, we may also be able to contemplate and reflect what it means to be part of the narratives of the nation.”

But while Cordero received a P1 million grant to finish the film, he still sought the help of friends and film lovers to raise the rest of the production cost.
Among those who helped were Naga Mayor John Bongat and by Albay Rep. Edcel Grex Lagman.

“I think it’s very important to look at this film in the context of Bicol cultural renaissance,” Cordero says. “If we were able to create renewed interest in contemporary Bicol literature, then we might be able to do the same in film.”

“We are moving toward the rise of Bicol cinema and I think it’s only fitting that Nora Aunor should be at the helm of this project.”

“Hinulid” is the second in a trilogy of movies Cordero envisions to complete, the first being his debut film, “Angustia.” It is one of eight finalists in the 3rd Quezon City International Film Festival, now running until Oct. 22. —CONTRIBUTED