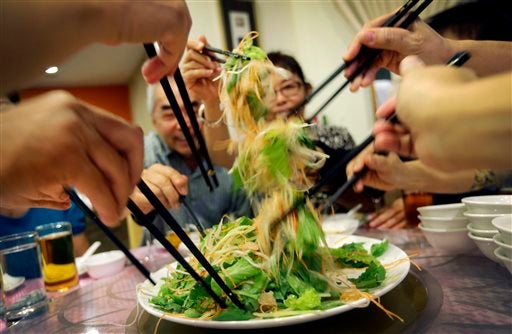 In this photo taken on Monday, Feb. 16, 2015, Cheong Lan Yang, 68, rear left, tosses "yu sheng," a raw fish salad, with family members during a family reunion dinner for Chinese New Year, at a restaurant in Singapore. This Singaporean tradition is known as lo hei, which means tossing up good fortune in Cantonese and is done at the start of family reunion dinners before Chinese New Year. The raw fish in the salad symbolizes the abundance of wealth and long life that Cheong, who lives in Australia, hopes for in the new year. I hope this Chinese New Year brings good health because I would like to live long enough to see my grandchildren one day, he said. Chinese New Year is a time for family gathering and that means a lot to me because I currently live abroad, and this is a time for us to share old memories as well as make new ones. AP

A newly opened restaurant in China racked up losses of 100,000 yuan (S$20,600) during its first week of operation, after its policy of allowing customers to pay what they wanted for their meals backfired spectacularly.

The music-themed eatery in Guiyang, the capital city of Guizhou province, had introduced a pay-what-you-want promotion to mark its opening on Oct 2, reported Shanghaiist.

But while its dishes got the thumbs up from customers, the restaurant’s owners were left to rue the cost of their risky initiative.

Some diners reportedly paid only 10 per cent of the bill, while others had no qualms leaving just 1 yuan (20 Singapore cents) on the table after eating.

Speaking to ThePaper.cn, one of the restaurant’s owners, Liu Xiaojun, said the feedback he had received from customers was that the food was both filling and tasty.

“It’s just that the payments don’t match up with the evaluations,” he lamented.

Liu’s relationship with the restaurant’s two other owners have since gone sour after they argued over the decision to “believe in the inherent goodness of human beings.”

He added that they had been banking on the majority of diners to do the right thing and pay what was fair.