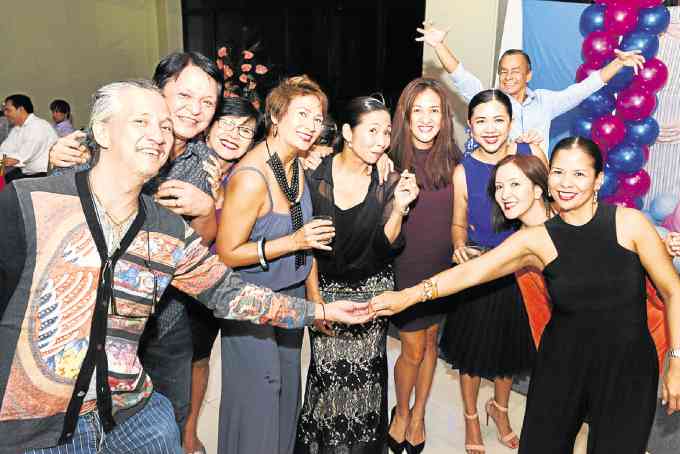 One of our town’s prominent society figures, the lovable and gracious Nene Santos Leonor, hosted a fantastic thanksgiving dinner for another year of her hectic, charity-oriented life, with a dance bash held at the North Forbes Park Pavilion.

Her long-time friends and colleagues were in full attendance. Nene wore a dark blue off-shoulder gown—“It’s just an off-the-rack by Victor Costa that I picked out in Rustan’s,” she said—complemented with gorgeous, dazzling blue sapphire with diamond necklace and earrings. That was enough to blow your Louboutin or Jimmy Choo shoes off, palangga.

The venue was decorated in blue and pink: balloons and curtains with glittering blue with pink ribbons hanging from the ceiling.

There were lots of flowers, including a bouquet sent by the lady with a golden heart, Mila How, a philanthropist who looks after the advancement of local farmers, no less.

The party was made more lively with music by the Marcy David Band.

Everyone helped themselves to the sumptuous spread that included lechon from Elar’s; corned beef with sauerkraut and horseradish, chicken à la Kiev, seafood lasagna, green salad with balsamic vinaigrette dressing, and Sachertorte from The Plaza; tempura, sushi and sashimi from chef Noel Hizon; and, from Nene’s own kitchen: roast beef and turkey, callos, lengua, pasta puttanesca, and a variety of salads such as Caesar, Waldorf, Russian potato, fruit and buko pandan, plus desserts such as maja blanca, cheesecake, strawberry cake, crunch cake, sans rival, caramel cake and chocolate cake.

Nene’s husband Jun kicked off the program by serenading her with love songs.

The biggest surprise of the evening was the appearance of longtime close friends turned husband and wife Danny Vazquez and Baby Cruz—that had many guests leaving their seats and approaching the couple with hugs and kisses.

Not long after, Marivic Madrigal Vazquez made her grand entrance, making tongues wag.

Vice President Binay had to leave early, but Dr. Elenita stayed on and danced the night away.

The party lasted till about 3 a.m., dahlings.

All in all it was a merry, memorable night for our darling birthday gal Nene Santos Leonor, who had fun with her famille and friends with the endless gossip that flew fast and furious into the night.