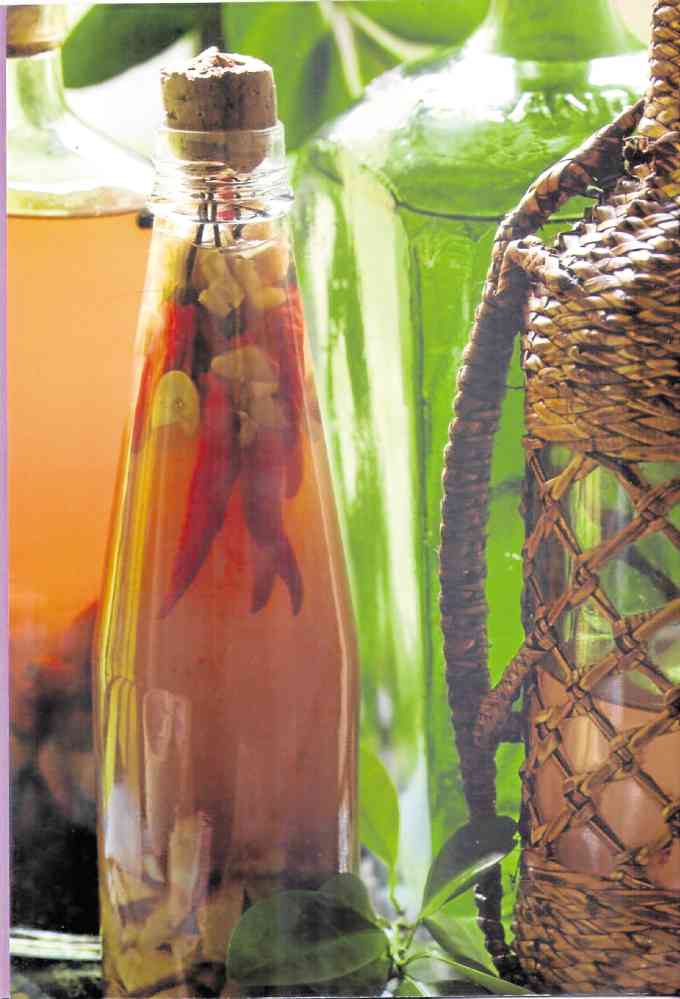 Vinegar is used in basic Filipino cooking—adobo, “paksiw” or “kinilaw.”

‘Sour power’: The many uses–and names–of the almighty Philippine vinegar

Choosing the subject matter every year for the Doreen Gamboa Fernandez Food Writing Award (DGF Award) is a delightful chore. From the 11th year of the competition in 2013 up to the 22th edition in 2022, the board has decided that the focus should be on ingredients used in cooking.

In 2013, the theme was rice, a grain that, Doreen Fernandez had written, “fuels our ordinary lives.”

She explained: “Farmers, fishermen and rural-urban families use it to break the fast, and then to bridge the day’s hungers till evening… If we didn’t have rice, our deepest comfort food, we would probably feel less Filipino.”

Sometimes what we decide on may be dictated by a food security problem for the country, such as when the coconut trees were being invaded by disease and we wanted to call attention to the problem, hoping the government, especially the agriculture department, would intervene.

Last year the subject was herbs; entries were well-written and informative.

This year, it is about vinegar, “the principle condiment” according to Fernandez. “Sour Power” is how she entitled one chapter in the book “Kinilaw: A Philippine Cuisine of Freshness” (Bookmark Inc., 1991), enumerating the many names by which it is called in the various regions: “Suka in Tagalog and Ilokano; aslam in Pampango; silam in Ibanag and Ivatan; langgaw in Hiligaynon; tuka in Pangasinan.”

And just to stress the richness of Philippine cuisine, vinegar is obtained from different sources, from different palms, and from fruits like banana, as well as sugar cane. Sometimes there are certain foods that require a specific vinegar, such as the pancit habhab in Lucban, Quezon, which needs Del Monte vinegar for it to be called authentic.

Sukang Paombong, made in the Bulacan town by the river called Paombong, is obtained from the flowers of the nipa palm. Fernandez wrote about the vinegar for her book, “Tikim: Essays on Philippine Culture” (Anvil Publishing, 1994). One Paombong resident, her guide and a poet, Tom Agulto, described the vinegar thus: “Ang sukang Paombong ay isang maasim na ala-ala sa matamis na pagsasama (Sukang Paombong is a sour remembrance of a sweet sharing).”

Dez Bautista, my intrepid guide to Bulacan cooking who was sorely missed during the reenactment of the Malolos lunch of 1898, always brought his guests to what he called the dwindling nipa forest. He had someone demonstrate how vinegar would be obtained from those palms.

I still recall with amusement how each tree was kicked so the tree “cried” (the liquid, that would later become the vinegar, was extracted). Also demonstrated was how the liquid fermented in clay jars. At the stage when the froth appeared, Bautista said the name for it was “Tanduay.”

We expect those who will join this year’s DGF Awards to contribute new knowledge to the subject matter. Research is important and, of course, excellent writing. The contest deadline is Dec. 15. Entries of some 800 words must be submitted to [email protected] Actual entries must have pen names. A contestant must submit another file with his/her real name, home address, e-mail address and contact number.