Locker key from the Titanic sells at auction for $104,000 | Inquirer Lifestyle ❮ ❯ 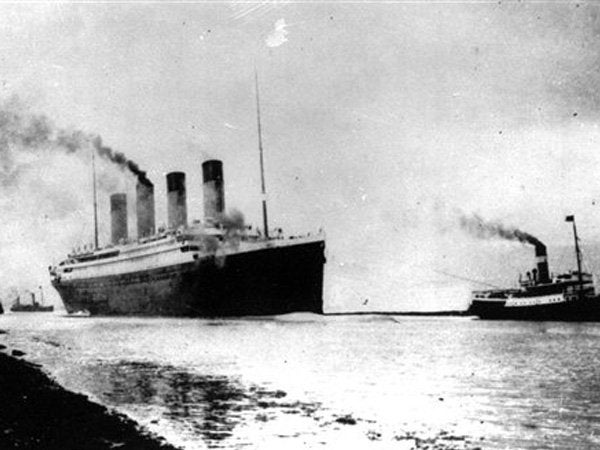 In this April 10, 1912 file photo, the Luxury liner Titanic departs Southampton, England, for her maiden Atlantic Ocean voyage to New York. An expedition team using sonar imaging and robots has created what is believed to be the first comprehensive map of the entire Titanic wreck site on the bottom of the North Atlantic Ocean. The luxury passenger liner sank about 375 miles south of Newfoundland, Canada, after striking an iceberg on its maiden voyage from England to New York on April 15, 1912, killing more than 1,500 people. AP

Locker key from the Titanic sells at auction for $104,000

The key belonged to Sidney Sedunary, a 23-year-old ship’s steward. He was one of the 1,500 people who died when the state-of-the-art passenger liner stuck an iceberg and sank during its maiden voyage from England to New York.

The key, attached to a brass tag stamped “Locker 14 F Deck,” was sent to Sedunary’s pregnant widow after his body was recovered.

It had been expected to fetch 50,000 pounds in Saturday’s sale by Henry Aldridge & Son in Devizes, western England.

Prices for Titanic artifacts have soared in recent years. In 2013, a violin believed to have been played as the doomed vessel sank sold for more than 1 million pounds. TVJ/rga

Titanic violin sells for over $1.6M at auction