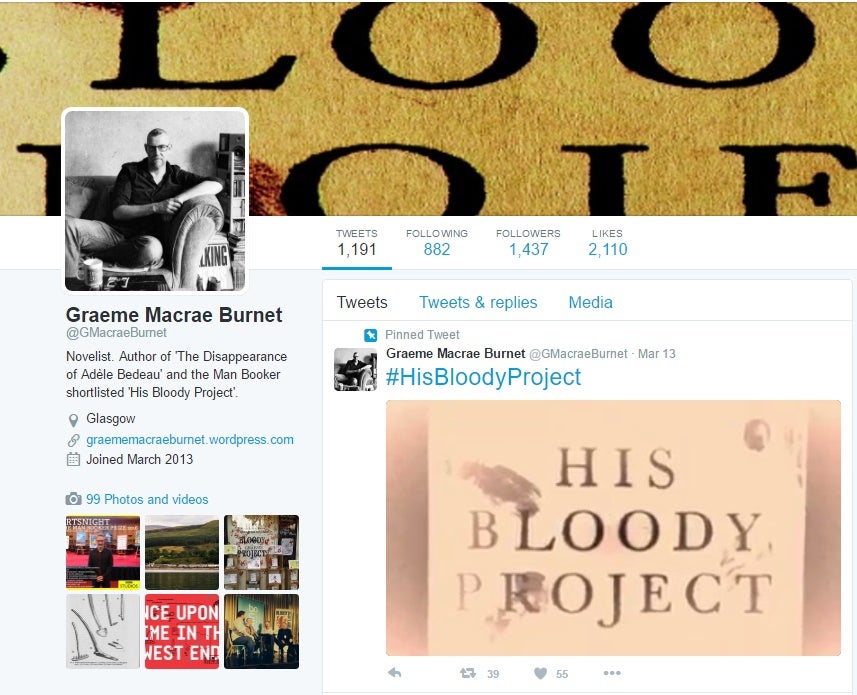 A tale of murder and class warfare in the Scottish Highlands by a little-known novelist is one of the favorites to win this year’s Booker Prize for literature on Tuesday.

“His Bloody Project”, the second novel by Scottish author Graeme Macrae Burnet, has been outselling the other five nominees, leaving its small Glasgow-based publisher struggling to meet demand.

“One of the great side-effects of being shortlisted for the Man Booker Prize is the interest that it has created abroad,” Burnet told AFP in an interview before the ceremony for the prestigious English-language literary award.

His novel tells the gritty story of a young and poor tenant farmer who murders the village administrator and his family.

The social hierarchy of 19th-century rural Scotland — dominated by aristocratic landowners — is a key feature of the book.

But its roots stretch far from the small community of Culduie where the novel is set.

“The initial idea, which has been in my head for 30 years, came from the case of Pierre Riviere, a French peasant in the early 19th century who killed three members of his own family and then wrote a rather eloquent account of what he had done,” said Burnet.

“I was just totally fascinated by that,” he said.

In a year where the jury spurned big-name novelists, the bookmakers’ two other favorites are South African-born Briton Deborah Levy’s “Hot Milk” and Madeleine Thien’s “Do Not Say We Have Nothing”.

“Hot Milk” is a tale of a torturous relationship between mother and daughter set in a Spanish village, while Canadian Thien’s book is based around a world of classical music and silence in revolutionary China.

Among the other shortlisted novels is Paul Beatty’s “The Sellout”, a satirical novel set in a fictional neighborhood of his native Los Angeles, which explores racial equality and the civil rights movement.

US first-time author Ottessa Moshfegh’s “Eileen” is a portrait of a disturbed young woman and Canadian-born Briton David Szalay’s “All That Man Is” was described by judge Jon Day as “a post-Brexit novel for our times”.

Previous winners of the prize include Salman Rushdie for “Midnight’s Children” and Michael Ondaatje for “The English Patient”.

Burnet said he was undaunted by the limelight and curious to see how the novel would resonate with different audiences internationally.

He said a Chinese journalist had told him that the book’s “oppressive atmosphere” reminded her of Mao’s China and the condition of Chinese peasants.

“That sort of Kafkaesque notion of the arbitrary use of power and regulations has actually filtered very much into ‘His Bloody Project’,” said Burnet, who lived in Kafka’s native Prague for a while.

The novel also has more than a touch of Belgian influence through Burnet’s devotion to the work of prolific crime writer Georges Simenon.

“The book is now going out into the world, but when you’re writing the book you have no thought of that and I don’t think you should have any thought of that,” he said.

“All you’re trying to do is create your characters in the most vivid, authentic way possible.”

The annual Booker Prize is one of the most high-profile awards in English-language literature.

Marlon James became the first Jamaican to win the prize last year with “A Brief History of Seven Killings”, a novel inspired by an assassination attempt on reggae music legend Bob Marley. TVJ