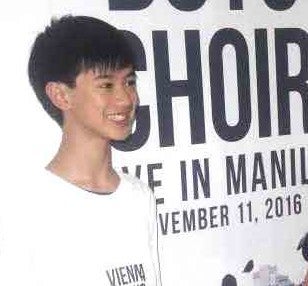 The famed Vienna Boys Choir, which has 500 years of history behind it, is returning to Manila after 12 years. One of its members is Filipino Lance So, 12.

The one-night concert will be held at the Philippine International Convention Center (PICC) Plenary Hall, CCP Complex, on Nov. 11, 8 p.m.

This was announced at a recent press conference at Off the Grill Restaurant in Quezon City, with So himself the main speaker. Also in attendance was his mother, Raquel Castro So.

The boys are divided into four touring choirs of equal standing, and named after famous composers associated with the choir’s history: Bruckner, Haydn, Mozart and Schubert. So’s group is named after Bruckner, Brucknerchor, with Manolo Cagnin as choirmaster.

The group has 22 regular members plus two probationers. The choirboys come not just from Vienna and other parts of Austria but also from 10 countries in Europe, Asia, Canada and New Zealand.

The November event is billed as “The Vienna Boys Choir Live in Manila.” It is presented by the Alumni Association of Xavier School and Austrian Embassy Manila.

“When I was asked to join the choir, at first I said no and then I said yes, ” said So. “I was inspired by the fact that the children were from all over the world. I love singing. It was really hard at first, I didn’t know any German then.

“Our choir conductor is from Italy. He’s really strict, pushes us. But I’m getting used to it. It’s my second year. I have become more disciplined.”

Last year the choir staged 30 concerts on a world tour, in Japan, South Korea, in many churches in Italy, in the Canary Islands and Eastern Europe.

Once his stint at the choir ends, So said he would like to go solo: “I want to be a pop singer.” —CONTRIBUTED