Despite ignorant applause after each movement, Beethoven’s 9th by PPO a triumph | Inquirer Lifestyle ❮ ❯ 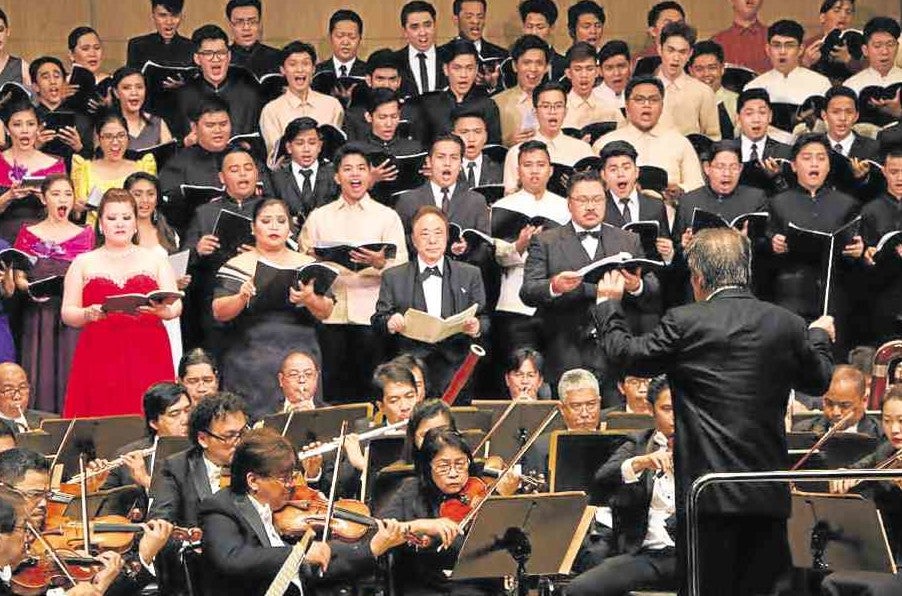 Despite ignorant applause after each movement, Beethoven’s 9th by PPO a triumph

Hearing these two works together revealed Beethoven’s feat as a symphonic composer.

Under the dynamic baton of Yoshikazu Fukumura, the PPO brought out the elegance of the first symphony reflective of the early Classical period. The work showed affinity with Mozart and Haydn. Elan defined the PPO’s playing that elicited absorbing listening.

Fukumura conducted from memory. In the Ninth, PPO expanded its instrumentation, doubling that of the First Symphony. Like the First Symphony, the Ninth was written in four movements, with the last movement utilizing four vocal soloists and chorus, hence its name, “Choral Symphony.”

In composing the Ninth, Beethoven was said to have adapted Friedrich Schiller’s poem “Ode to Joy,” about friendship and brotherhood.

Hiroaki Uesugi, director of Japan Foundation Manila, said the concert was “highly symbolic of the strong bond of the Philippines and Japan that has been nurtured through the decades.” Truly, he continued, “music transcends boundaries and foster friendship among us all.”

This friendship was best articulated by the engagement of maestro Fukumura as conductor of the PPO. The parts of the four soloists in the last movement of the Ninth Symphony were equally divided between two Japanese and Filipino classical singers.

Fukumura revealed an intimate and thorough understanding of the massive work whose playing lasted over an hour. He brought out the majesty of the work that enraptured the audience. He was precise and thorough with the details. He stood like a titan on the podium, conducting with authority and virile dispatch.

The first movement, allegro, sounded gloriously. The orchestra played with succinct clarity. One curiously listened to the bassoon marvelously playing in the low register.

In the second movement, the scherzo (traditionally placed in the third movement) was played with no let-up, revealing its dance-like gaiety. Here the trombones made known their presence and the timpani had a grand solo.

In the third movement, the adagio was etched with meditative lyricism. Scored in variation, the rendition was soulful. Highly reflective, it provided a stark contrast with the bubbly second movement.

The adagio that followed the scherzo, which conventionally speaking should have been the other way around, was perhaps designed for the dramatic entrance of the grand fourth movement.

Tradition has it that the last movement is immediately played after the last note of the third movement has faded out.

The uncalled-for applause nearly spoiled this spontaneity. (Some in the audience applauded practically after every movement, so it is high time it should be reminded of the proper decorum in attending classical concerts. Perhaps a reminder should be placed in the souvenir program or announced.)

The visibly irked maestro gave his downbeat for the orchestra to play the presto passage which was grandly played. Then the cellos and the brasses intoned the main theme. The orchestra superbly played the themes the soloists and choir rendered later.

Noel Azcona fired the recitative with brilliance. Not having heard him for quite a time, this writer found his singing a revelation. His voice was placed in the dome and sported an opulent brilliance.

In contrast, tenor Hiroshi Watanabe lacked luster and did not render the drinking aria with brilliance. He was soon eclipsed by the male chorus which was set in a festive march-like tempo.

Soprano Shoko Fukuda essayed her part quite impressively. Camille Lopez, who sang the alto part, was in top form.

The composite choir sounded professional. It was made up of the University of the East Chorale under Anna Abeleda-Piquero; UP Los Baños Choir under Romel Lomarda; Philippine Vocal Ensemble under José Emmanuel Aquino; and Technological Institute of the Philippines Choral Society under Cyro Bon Cloui Moral.

Fukumura surged through the four sections that made up the entire movement with efficient promptness. A hearty applause broke at the end and a standing ovation followed. —CONTRIBUTED