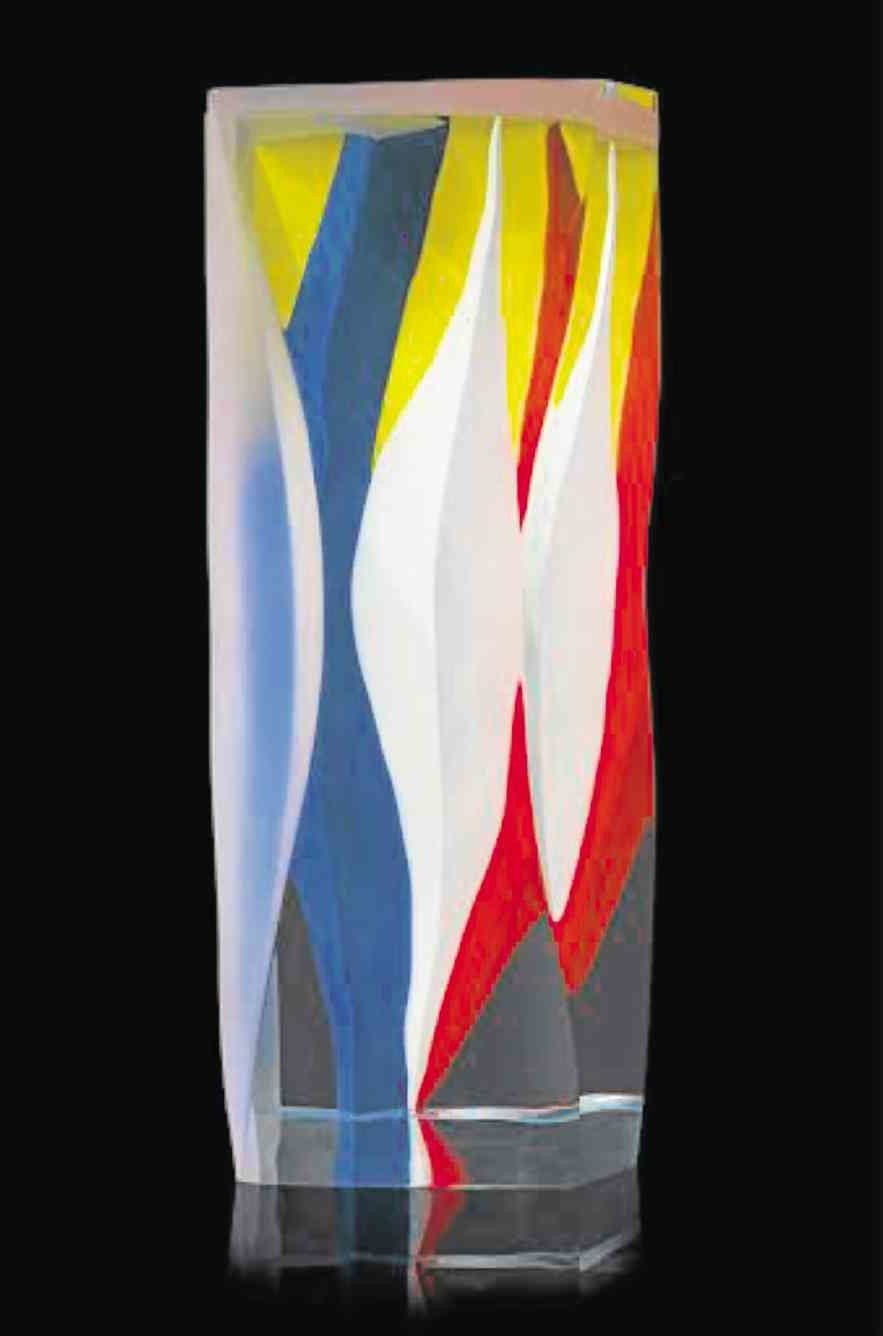 Ramon Orlina has produced an immense body of glass works that have gained for himself not just local prominence but also the recognition of the world’s eminent practitioners of glass art.

While Orlina initially mined the green-toned hues of Asahi glass, he in time, with available resources, was able to work with other colored glass, in particular Swarovski lead crystal, with such subtle and exquisite tones as sapphire, amber, rose, blue, golden yellow and black. Each of these shades elicited as many nuances of light emitted by his rich repertory of sculptural forms.

Today, Orlina works with optical glass, a specialty glass used for optical devices such as telescopes, binoculars and eyeglasses. In effect, this is pure, unadulterated optimal light. It is absolutely color-free. One looks through a block of optical glass as though there were no object in sight, as though no mass existed before you, no volume present to interfere with one’s vision. It is, in a phrase, an object shot through with light. With such clarity, limpidity and purity of light, Orlina is able to work on a clean slate.

What characteristics now distinguish these optical glassworks? Without a doubt, the one descriptive word that perfectly captures these works is: “sparkling.” Even applied to the various senses, the word will find its parallel. Whether by sight, by sound, or by taste, sparkling is the word or sensation that is generated by this new material.

Thus, for instance, the female figure the sculptor brings to a full flowering via a more realistic rendition that delineates the contour of the female breasts and buttocks.

But the feminine form itself can proceed without any obvert reference to the female body. A master of the curvilinear form, Orlina can articulate the female form by the mere virtue of a series of sleek undulating lines, with all the eroticism sublimated within the energy and fluidity of the line.

Orlina now brings the seeming open-endedness of the optical works by introducing the surprising element of colors, which is paint or enamel of various shades sandblasted onto the optical glass. This radical gesture may violate the integrity of sculpture as a medium.

The sculptor, however, justifies the use of color when he uses it not as pigment, or coloring matter, but as light. Indeed, the paint is applied through a spray-gun, which emits colors in vaporous jet-sprays, like mists suspended in the atmosphere and trapped within illusionistic space.

Incapable of creating an infelicitous design, Orlina, always sensitive to light, has decided to float these vaporous exhalations of color to actively accentuate and contrast and complement the equilibrium of light emanating from optical glass.

This exhibition of Ramon Orlina’s optical glassworks was organized and presented by Gallery Nine at the 2016 Manila Art. —CONTRIBUTED