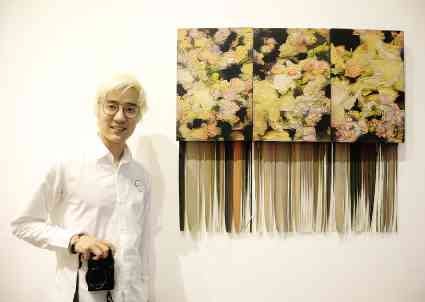 Stretching the limits of the digital image

Within the busy and crowded metro gallery scene, the quirky art loft Archivo 1984 has distinguished itself by avoiding the well-worn furrows of local contemporary art in favor of less-trodden paths.

From John Silao’s portraits of disco-era glam queens to Marc Gaba’s variations on the theme of Meryl Streep’s visage, the art space has, for the most part, showcased the work of outliers pursuing singular visions.

When he was starting out, Yao first made a name for himself with his fashion and magazine work. Since then, however, he’s gone deeper into experiments within the liminal space where art and science merge into some kind of exotic hybrid.

The 10 images featured in “Funopticon” stretch the limits of the digital image through the application of technology to achieve painterly effects, and beyond.

“I’ve been playing around with two different styles of artwork,” says Yao.

“One of them involves painting Rorschach images and layering them on top of photographs that I took.”

This process results in otherworldly mindscapes that invite a deeper look beneath the surface of things.

“And then I was also fascinated with artificial neural networks,” he adds.

An artificial neural network is, essentially, a data processing system that has the ability to learn.

In Yao’s case, using an open-source program run through a Cloud server, he trained an artificial neural network to transform digital photographs into striking images that evoke the painterly styles of specific artists.

For instance, fed with digitized images of every painting by Fernando Amorsolo, the network “learns” to produce Amorsolo-esque images when fed with an original photograph by Yao.

“It’s like a filter but it’s a little more complex than that,” he says.

Actually, the intervention of what amounts to an artificial intelligence in the image-making process can result in spectacular, and frankly, spooky effects, such as the emergence of what appear to be anthropomorphic figures in a still life.

“It’s as if the computer is forced to look for bodies where bodies don’t exist, so it comes out semi-surreal,” says Yao.

He also programmed the artificial neural network to produce images that emulate the styles of Ang Kiukok and Pieter Bruegel.

“I feed it through images, but I don’t tell it how to paint—it has to run through its own algorithm,” he says.

“It’s incredible what artificial neural networks can do right now. Some people feel threatened by it, but I feel it’s just an extra tool in the tool kit for artists in general.”

The name of the show itself is a play on “Panopticon,” the 18th-century philosopher Jeremy Bentham’s idea of an institution where every inmate can be observed by a single watchman. By extension, a panopticon is about social control through surveillance, a subject that the more conspiracy-minded among us should be familiar with.

In the age of Instagram, the photographer becomes an agency for surveillance, but Yao also turns the idea on its head with “Funopticon.”

“For me this is the antithesis,” he says. “From the visual essay perspective, surveillance doesn’t work in the 21st century. People have mobile phones that allow them to take documentation wherever they go, so it’s not necessarily overtly that an authority figure does full surveillance.”

With his slight physique and shock of yellow hair, the bespectacled Yao looks younger than his 36 years, but he’s actually been photographing for two decades now.

“My stepmother gave me my first camera when I was 16,” recalls Yao, who spent his early years in Vancouver, Canada.

“I was really fascinated with how it worked, the way it could document, the way you could play around with capturing light and how it could be retranslated.”

Starting with color slides and then black and white film, Yao went through the entire learning curve of analog photography just as digital photography was emerging. By age 18, he had already exhibited his work at the Hiraya Gallery.

This was followed by an interlude in the US, where he enrolled in what he describes as “this super Left-wing hippie college in Western Massachusetts,” where he studied Asian identity in North America.

Identity may have also played a part in Yao’s choice of nom de guerre. His given name is Jose Campos III; his grandfather Jose Yao Campos was the founder of Unilab and by extension the local pharmaceutical industry.

“Back when I was doing fashion photography, when I met with people for the first time they would go, ‘You’re Jose Campos?’ I met an art consultant who said I should try switching to ‘Yao’ for fun.”

While he has great respect for his illustrious grandfather’s achievement, he has no interest in joining the family business.

“I have some siblings and that’s kind of their life passion, but I’d like to stick to my art,” he says. “It’s been a great adventure.”