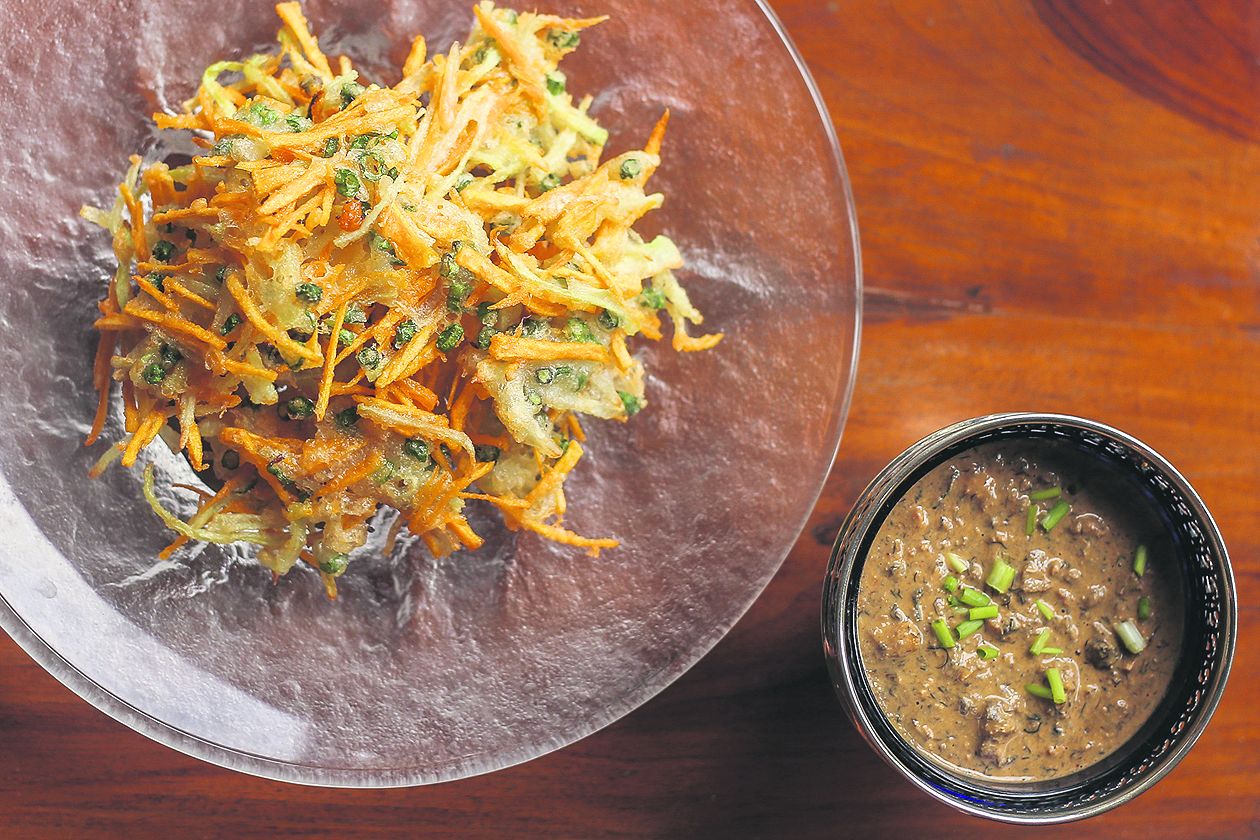 ‘Adobo’–with a sauce of salted duck egg and curry leaves

Mention adobo to Dulce Magat-Gibb, and she can instantly create a delicious spread of adobo-inspired dishes.

Gibb, who finished culinary arts in Le Cordon Bleu Paris, takes a modern gourmet-ish spin to classic adobo by playing around with its taste and presentation, using lots of Asian spices and herbs.

Gibb cooks a huge slab of pork belly marinated in adobo mixture, simmers it for a few hours until nice and tender, and roasts it in the hot oven until the pork skin turns crispy crackling. When you bite into the meat, you can easily savor sharp combinations of garlic, vinegar and freshly ground pepper and salt.

Out of the box

But the taste adventure doesn’t stop there. Gibb steps out of the box by dressing and spicing up the pork with a special adobo sauce thickened with chunks of salted duck egg and curry leaves. It’s a bit on the salty side, but when you spread it on the pork slices, the flavors simply explode in your mouth.

“Adobo is very versatile,” says Gibb, 52. “You can whip up all sorts of delicious dishes using adobo as your base. You can use tofu, fish, chicken or pork and add in some spices. It’s still adobo.”

Gibb admits having a penchant for specialty sauces and dips. For her crispy fritters of sitaw, sayote and kamote seasoned with parmesan cheese, she pairs it with Balut Adobo Dip that has a heady aftertaste with a hint of paprika, mascarpone and chilli.

For the Adobo Scones, Gibb cuts the scone in half and spreads one side of it with the creamy mix of kintsay mascarpone sweetened with date molasses and then topped with a scoop of adobo sa gata duck rillettes. The rillette, which is similar to meat paté, is seasoned with different herbs and spices like star anise, cumin, cinnamon, coriander, cardamom and fennel.

“I love playing around with taste and flavor,” Gibb says. “It gives the food a different dimension.”

After finishing Hotel and Restaurant Management at St. Scholastica’s College, Gibb pursued her passion for cooking in Paris and stayed there for three years. She came home in 1989 and worked for a few years as an executive chef for Glenda Barretto’s Via Mare.

It was also around this time that she married the British general manager of Mandarin Oriental Manila, Michael Gibb. As a hotelier’s wife, Gibb is constantly entertaining at home, cooking for friends and acquaintances. Her husband is now assigned in Macau for a Macanese hotel group.

Every now and then, Gibb hosts intimate dinners in her Makati condominium, which she also rents out to friends who want to try her food. (A Table, tel. 0917-8621800)

She says her cooking foundation is French, but she also does a lot of Asian cuisine—Thai, Malaysian, Balinese, Chinese and Japanese.

Gibb used to live in Kuala Lumpur with her traveling GM husband, so once in a while, she likes pairing the family homecooked food with nasi lemak (cooked in rich coconut milk), sambal and curry.

When the family moved for a time to Riyadh, Saudi Arabia, she also tried her hand in Middle Eastern food like mezzes, kofta, falafel, hummus.

“When I plan a menu, I always look at who my guests would be and balance everything, including the seasoning, so that everyone can appreciate it. I also try to follow the trend or any buzz ingredients like salted egg, and include them in the menu,” she says.

For duck rillettes, marinate altogether duck, spices, salt and oil in a baking dish. Cover and refrigerate overnight. Remove duck mixture from ref to come to room temperature. Bake over lowest setting the oven can do for at least 6 hours, or until duck falls off the bones when gently prodded.

Let mixture cool down in oil mixture.
Remove duck from oil and take out skin and any spices that cling to the meat. Shred duck meat with two forks or fingers. Rillettes can be kept refrigerated for at least two weeks. Make sure the rillettes are covered in oil so that no air comes through and they are well-preserved. May be kept for at least 2-3 days.

“Adobo” mixture: For every ½ c of duck rillettes, add 3 tbsp rillettes oil, ¼ c soy sauce, ½ c of vinegar and ¼ c of freshly squeezed coconut cream. Cook together until all the liquid has evaporated. Chill mixture until ready to serve.

*Note: The rest of the rillettes oil with the spices may be kept frozen and reused for another batch of duck rillettes.

Cook onion in olive oil over a low fire until golden brown. Increase the heat and add the rest of the ingredients together, and turn down the heat to a simmer. Simmer for 2 minutes. Adjust seasoning according to taste.

Mix together kintsay and mascarpone and put into a serving container. Drizzle with date molasses and swirl into mascarpone to incorporate slightly but not fully.

* Note: Date molasses are found in Middle Eastern stores and may be omitted if desired. An option is to finely chop some dates or swirl in some muscovado sugar instead, or leave mascarpone plain with just the kintsay.

Cook fritters until just before golden, when sitaw has started to come out with its green color. Remove fritters and drain on a wire rack with kitchen paper towels to absorb the extra oil. Repeat with the rest of the fritters, adding cream soda and ice and wetting the cornstarch mixture to form a batter until all the vegetables have been used up and fried.

Just before serving, heat up the oil again to 350F or 180C and deep-fry quickly the fritters for a second time to reheat and crisp them up, just until light golden brown. Remove quickly and drain on kitchen paper towels. Serve immediately while hot, together with the Balut Adobo Dip.

Combine all ingredients and cook until balut has achieved adobo taste, and the vinegar’s taste is mild and not harsh.
Add mascarpone or cream to the balut adobo and reduce until mixture has thickened to a dip consistency. Adjust seasoning to taste. Serve with vegetable fritters.