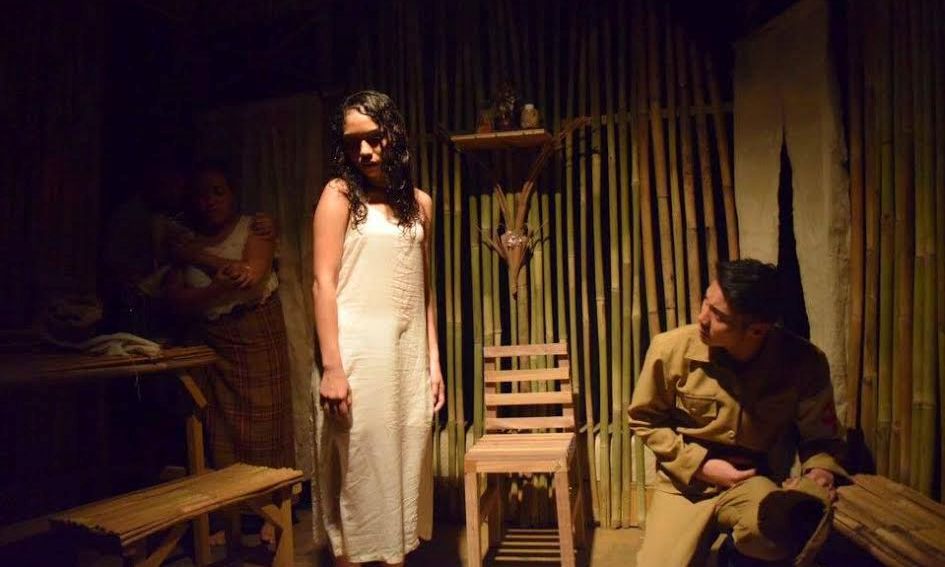 Horrors real and imaginary in ‘Lagablab’ and ‘14 Leandro Road’

One’s eyes have no choice but to stay glued on the stage for Artist Playground’s “Lagablab” on a Sunday afternoon. It’s set on the tiniest stage this writer has ever seen (in a venue aptly called The Little Room Upstairs). The audience capacity is limited to around 13 people on four rows of benches.

Inspired by “The Unconquered,” a short story by British writer W. Somerset Maugham, the local adaptation was written by Dan Hollanda and directed by Paul Jake Paule. It is as gripping as dramatic snippets of Philippine history (and, OK, current events) could get—about a family forced to deal with poverty, war, violence and questions of loyalty and patriotism as best as they could.

Set in the province of Bulacan during the Japanese occupation, it’s the story of Chayong (Ira Ruzz), who suffers misfortune after misfortune. She loses her fiancé Unyo (Christian Tiongson) and younger brother Carding (John Racho) to the war. She gets raped, impregnated and then wooed by Japanese soldier Hirohito (Anjo Resurreccion).

Disturbingly, her meddlesome mother Pilang (Sheryll Ceasico) and spineless father Andong (Gilbert Bacolod) goad her to accept her fate and look more kindly at her Japanese tormentor-admirer, to ensure the family’s survival. Chayong’s mounting sense of shame and desperation culminates in a shocking act of vengeful rage.

“Lagablab” is a production that makes highly creative use of its tighter-than-tight space; the set, lighting and props make for a raw, intimate ambiance. It’s also succinct and brisk at less than 120 minutes.

The downside to being that close to the action, though, is that, at times, there seems to be too many details happening all at once. A crucial point, for instance—Resurreccion’s change of heart from cruel oppressor to lovestruck swain—goes by too quickly and none too convincingly.

While Ceasico provides whatever comic moments can be had in this gripping play, Ruzz is intense, and paces the rest of the cast with her strong turn as Chayong.

Its scrappy vibe—small production in a tiny space with mostly up-and-coming actors— makes “Lagablab” a unique experience worth the trip (The Little Room Upstairs is at the 17th floor of Lansdale Tower in Mother Ignacia Ave., QC). The post-play conversation should be just as interesting.

In Jay Crisostomo and CK Bautista’s adaptation of Edgar Allan Poe’s “The Fall of the House of Usher,” Migui Moreno played Rudy, a young man who could hear and see his dead mother Consuelo (May Bayot) and grandmother Victorina (Peewew O’Hara) while in Baguio’s allegedly haunted Laperal White House.

To add to the creepy atmosphere, an incestuous attraction was also implied between Rudy and his mentally ill younger brother Anton (Gry Gimena). The in-house doctor taking care of Anton would turn out to be the keeper of the family’s sordid secrets.

Moreno and Gimena had some of the best lines in Filipino—“I’ve been talking to the walls of this house for 13 years” and “To die is to sleep without dreaming” just two of them. But much was lost in their undisciplined acting; their forced intensity needed to be toned down for any sliver of truth or authentic emotion to reach the audience. It didn’t help that the lights by Bambi Bucao and sound design by Vince Lim seemed out of sync.

Just the same, the play’s main issue—mental illness that can be made worse by the mistreatment and oppression of sufferers by fearful families and an ignorant society—occasioned some thought on the ride home. —CONTRIBUTED