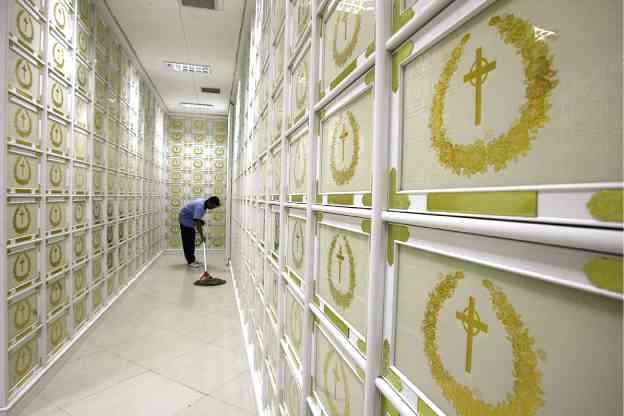 The Sanctuarium along Araneta Avenue in Quezon City is like a five-star hotel or a 12-story buildingwith atrium and scenic elevators, 28 vigil chapels equipped with furnished family room and bathrooms, a flower boutique and coffee shops. —JOAN BONDOC

When my wife’s grandmother died in the early 1980s, her children decided that they wanted her remains cremated.

Back then, cremation was still fairly uncommon among Filipinos. There was only one functioning crematorium in Metro Manila at the time.

The San Lazaro Hospital crematorium was a turn-of-the-century relic, intended mainly for the disposal of the remains of patients who had died of highly contagious diseases, such as the plague or leprosy.

Since the incidence of those diseases had waned, the crematorium was used for the ordinary dead, mainly from the Chinese-Filipino community, we were told by the custodian.

Basically, it was a brick oven fueled by diesel. Because of its inefficiency, it took more than eight hours to fully consume an adult corpse—longer if the body was kept in the coffin.

Because her children wanted only pure human remains, the body had to be taken out of the casket, laid on the slab, and the clothes stripped away at the last moment before it was pushed into the oven, making the procedure seem even more strange and outlandish.

We had to return the next day to collect the “cremains.” As the crematorium didn’t have a grinder, there were visible bone fragments mixed in with the ashes.

We brought a blue china porcelain vase to hold the ashes. Later they were divvied up among her children, kept on shelves in their respective homes.

The San Lazaro crematorium was finally closed in 2002, ironically just as cremation was taking off among the masses.

Today it’s a standard service offered by most of the bigger funeral homes. Apart from the cremation itself, the package usually includes a wake, a memorial service, a choice of funerary urns or boxes, and the option of a niche in a columbarium.

Some families also opt to forego the traditional viewing, choosing immediate cremation instead, which also does away with the need for a casket, embalming services, and the risk of unnerving the guests with a bad makeup job.

Thanks to the advent of modern, high-temperature gas-fired ovens, the cremation itself  takes only a couple of hours or so. After they cool, the ashes are then ground to a fine white powder.

The playlist often includes requests for the dearly departed’s favorite tunes, as well as perennial classics such as “Oh My Papa” (for fathers), “Ugoy ng Duyan” (for mothers), and “Ikaw” (for everyone else).

Cremation isn’t just for humans, either. A number of veterinary hospitals offer cremation services for beloved pets who pass on.

The new guidelines recently released by the Vatican acknowledge the growing popularity of the cremation option among Catholics.

Until fairly recently, the Church still frowned on cremation, while grudgingly admitting that it wasn’t strictly against the canons. The new Vatican guidelines, released last Oct. 25, take cremation out of this gray area. They explicitly allow cremation for Catholics, with some caveats.

To begin with, the pronouncement reiterates the Church’s preference for burial in hallowed ground.

If cremation is chosen, the Vatican emphasizes that “it is not permitted to scatter the ashes of the faithful departed in the air, on land, at sea or in some other way, nor may they be preserved in mementos, pieces of jewelry or other objects.”

Keeping them in an urn at home, or divvying them up between surviving family members, is also considered sacrilegious.

According to the Catholic Bishops Conference of the Philippines (CBCP), those practices are “un-Christian.”

“The body is the temple of the Holy Spirit,” says Fr. Jerome Secillano of the CBCP. “It should be kept in a proper place and the Church believes its final resting place is the cemetery.”

If these guidelines aren’t met, the Church warns, the departed may be denied Christian funeral rites.

Some Filipinos might consider the Vatican pronouncement too little too late.

In the absence of clear guidelines, many Filipinos who choose cremation have made up their own minds about how to go about doing it, and what to do with the “cremains.”

We took a random survey to gauge current attitudes of some modern Filipinos toward cremation and the disposal of the remains.

“I don’t think I have any big idea about where to dump my ashes. If my family wants to save money on an urn, they can scatter my ashes in the backyard as fertilizer.”

“Yes, cremation. My ashes scattered to the winds or on the sea, preferably from a cliff or a mountainside.”

“Well, once my soul exits my physical body, then I will let nature take its course and have maggots, etc. feast on my decaying body, once my organs such as my eyes, etc. are extracted for possible future recipients. My body will turn into dust anyway; I don’t want my surviving loved ones to shoulder the cremation expenses when they can use it elsewhere. Plus the thought of burning my body sounds like the fires of hell consuming a useless cadaver, while my soul is enjoying the light and peace of heaven in oneness with God. Amen.”

“Cremation—either keep my ashes at home or throw them in the ocean.”

“Scatter my ashes, definitely—I don’t want to burden anyone with having to remember me. Preferably in a forest, although I still have to ask permission from the lumad. The people of Sagada, by the way, do not want non-Sagadan ashes. Second choice: the ocean.

“I want my ashes to be scattered in the Maragusan Valley in Mindanao. Originally, the place I wanted was Mt. Pulag, but we are getting old and we don’t have kids, and my wife might not be able to climb the mountain if I die ahead.”