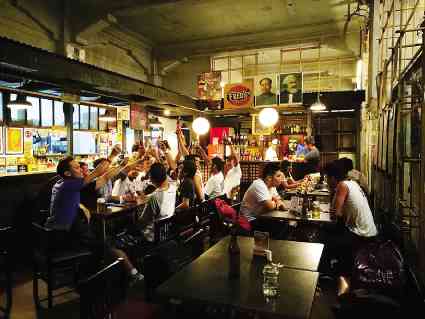 Is there nothing more to do in Manila at night except to endure the sight of rows upon rows of KTV bars and their GROs standing by the road like scalpers offering a naughty game of peekaboo?

You can count on the fingers the few alternatives: The Bar 1951 on Adriatico featuring live gigs; nearby, good old Café Adriatico still offering Old World ambiance and comfort food; a few meters away, Blue Room on Nakpil with DJs playing classic rock, jazz and pop records.

Oarhouse, the small pub with a regular clientele of local artists, writers, photographers, stage actors and hip foreign tourists, has quietly moved from its original location on Mabini to a bigger space on Bocobo.

The wait staff is busy on a Tuesday night, the tables occupied by friends and couples, and the bar stools full of young women and a few Caucasians.

The canned music is Steely Dan, enough for us to feel energized and expect a good time.

At the left corner of the bar sits Ben Razon, the topnotch photographer turned Oarhouse owner. It’s been six years since he took over from a friend to run the bar in this new location, he tells us, and the good thing about it is that it’s near Pedro Gil and UP Manila where there are lots of people wanting to unwind at night.

The food menu at Oarhouse is interesting—the kinilaw na tuna is soaked in gata which arouses the taste buds, and the chicken isaw is grilled to a crispy finish.

While enjoying our third glass of merlot, we keep looking at the new bar chow written on a board. Try the sausages next time, Razon recommends, they’re all-natural.

After two hours of nonstop Steely Dan, Razon changes the music and says, “This is Al Dimeola with Jean Luc Ponty and Stanley Clarke, live.”

At last, a new hangout in Manila.

The place looks unassuming, almost resembling a garage with makeshift chairs and tables—although posters of Mao, Marx, Castro and Guevarra behind and above the bar add character to its “revolutionary” theme.

To us, the main attraction is its selection of Pinatubo Craft Beer locally brewed in Pampanga. We order a bottle of Dark Angel lager and find it pleasing to the palate. It’s a bit pricey at P180, though, but never mind ’cause you’re not just paying for the drink, but also for a few hours of chilling in a historic spot in Manila.

Greenfield District in Mandaluyong is celebrating the first anniversary of its weekend event, “Kaleidoscope,” with a month-long program of activities starting Nov. 4.

Guests can look forward to music, food and interesting sights including a glow-in-the-dark costume contest, LED dancers and entertainment with magic in light and color, an art gallery, and fireworks.