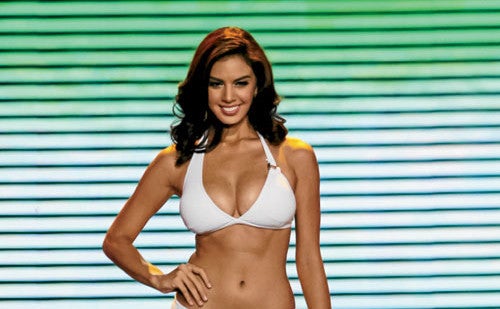 Miss Philippines Earth 2016 Imelda Schweighart is under fire for her comments against pageant winner Katherine Espin of Ecuador.

Schweighart, who failed to make it to the Top 16, was caught on tape telling her supporters that Espin has a fake nose, chin, and breasts.

In an interview with CNN Philippines on Monday, Schweighart said she did not intend to offend Espin, and thought she could be “comfortable” speaking to her supporters.

“Hindi ko naman mini-mean na malait siya (I didn’t mean to insult her). Actually she said it herself that she underwent surgery. But how I said it, I was so unmindful while I was saying it,” said the Palawan native.

Schweighart’s finish marked the first time that the Philippines failed to advance to the semifinals since 2010. The country scored back-to-back victories in 2014 and 2015.

Schweighart also posted videos of her on Facebook wearing a gold gown that looked like one worn by Miss Ecuador in her coronation.

“Philippines didn’t get in but here’s the gown I was supposed to wear :) Made for me by Leo Almodal,” she wrote in the caption.

In an interview with CNN Philippines, Schweighart on Monday said she was offended that the gown she was supposed to wear was given to Espin.

Here’s what netizens have to say:

Imelda Schweighart is a disgrace to Philippine pageantry. I couldn’t imagine her behaving like that. Truly distasteful. #missearth2016

The only crown Imelda Schweighart deserves is the crown for trashiest ass bitch this Earth has to offer. What a disgrace to the Philippines.