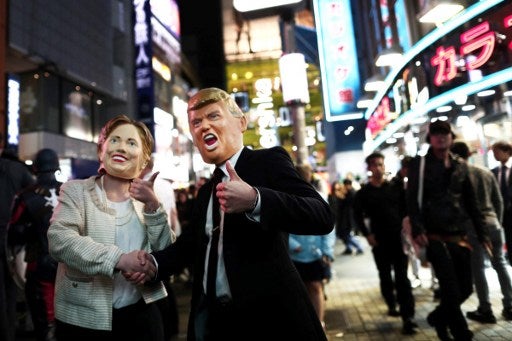 For the normally reserved Japanese, the macabre celebration of the dead is an excuse to slip on a wacky costume and let their hair down at boozy parties decorated with tombstones, skeletons and spiders.

“We got into Halloween when our children started to go to kindergarten,” Eriko Yoshino told Agence France-Presse, dressed as the Alice in Wonderland character Tweedledum at a kids parade.

“The children love it and it’s fun to wear fancy dress and cook pumpkin dishes,” she added, confiding: “Nothing too fancy — something I can pop in the microwave.”

With Halloween falling on a Monday this year, major weekend parades in Tokyo and Kawasaki, south of the capital, drew some 250,000 party-goers while Tokyo Disneyland also enjoyed a bumper two days.

Halloween is a billion-dollar industry in Japan with an estimated 20 million people nationwide getting into the grisly spirit.

Shops and bars are decked out with pumpkins and jack-o’-lanterns, while restaurants and convenience stores offer pumpkin-flavored drinks and desserts.

“I’ll tell you why I’ve flown in,” said a young reveler dressed as a rooster and identifying himself only as Chicken Shota.

“Too many chickens are being gobbled up around the world,” he added, perched dexterously on a hoverboard outside a pub.

“My message for people is to stop persecuting chickens.”

‘Donald’s not so bad’

“In the spirit of Halloween I’ve come to offer an olive branch to Donald,” said one reveler in a rubber Hillary Clinton mask as she, or he, put a friendly arm around a Donald Trump lookalike. “He’s not so bad.”

“I love Halloween,” said Haruka Ebino, aged four and a half, her face barely visible beneath a furry dinosaur costume.

Cradled by her father, she added with a gap-toothed grin: “My Godzilla suit is nice and warm.”

Among Ebino’s pint-sized friends were stormtroopers, ninja turtles and a team of ghostbusters.

But the freaks came out at night as Ebino and her cohorts were safely tucked up in bed.

“Drink this,” drooled a vampire bartender, fake blood dribbling from his chin as he offered a smouldering concoction served in a test tube. “You will turn into Dracula.”

At the same Halloween bash, flesh-eating zombie nurses squirted blood-red alcohol shots into the mouths of club-goers, who would all be back at their desks on Monday morning dressed more sensibly.

“Japanese people love dressing up,” said 29-year-old Mitsuo Kaneshiro with a swish of his Batman cape.

“It’s nice to be able to escape your daily life now and again. I’ll be back in the office in a suit and tie tomorrow.”/rga