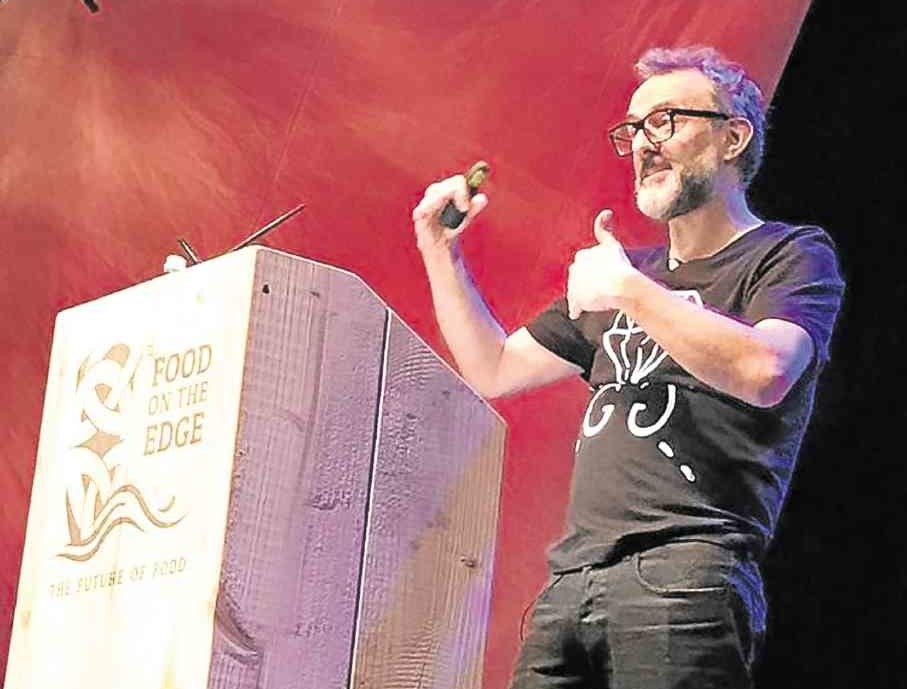 Chefs use all that wasted food to feed the hungry

You can’t stop God from talking,” said JP McMahon, director of the successful Irish food symposium Food on the Edge, on why he didn’t interrupt Massimo Bottura when the latter’s talk exceeded the time limit.

Bottura is chef of Osteria Francescana in Modena, Italy, rated no. 1 in the World’s 50 Best Restaurants by Restaurant magazine.

The chef is more than the sum of his recipes,” said Bottura. “Cooking is an act of love and also a call to act. Make visible the invisible. Human condition is fragile, and there is food enough for everyone.”

On Oct. 25, hundreds of people packed the Town Hall Theatre in Galway, Ireland, to listen to Bottura as he narrated his experience in opening a gourmet soup kitchen that uses leftover food to feed the hungry in Rio de Janeiro.

It seemed impossible, but less-than-ideal conditions didn’t deter Bottura from pursuing his mission to help end hunger and poverty, rebuild dignity in people, and invite other chefs to use their talent and influence for social change.

Through the website Refettorio Gastromotiva (www.refettoriogastromotiva.org), restaurants donate excess food, like milk about to expire, or overripe mangoes, and chefs turn them into something delicious and edible.

It replicates what Bottura did during Expo Milan 2015, when he converted an abandoned theater into a free food center.

For the first meal, he served Pasta Carbonara. He also boiled, toasted and smoked tons of banana peel to transform it into something akin to bacon. And it worked—with people, chefs and food critics impressed.

“There is hunger. There is waste out there; 860 million people are starving, 1.3 billion tons of food are wasted every year… There are amazing people to help. So go out there, take chances, be bold, and show that you really care. There are no more excuses,” Bottura said.

The challenge moved the audience to give Bottura a roaring, standing ovation.

The two-day symposium gathered an international roster of chefs and food enthusiasts.

Jamie Kennedy and Ned Bell talked about the future of Canadian cuisine.

Sheffield-born Douglas McMaster, a school dropout who has earned the title of Britain’s most irreverent chef, talked about conscientious cooking. “Waste is a failure of the imagination,” he said.

From using sturdy plates made of plastic bags and reusing jam jars as glasses to coordinating with suppliers and producers to eliminate the use of Styrofoam containers, McMaster’s coffee shop Silo by Joost became the world’s first waste-free café in Melbourne, and Silo Brighton, the UK’s first zero-waste restaurant.

Saqib Keval, co-founding chef of the People’s Kitchen Collective, advocates food as a tool for transformation. “As leaders in the industry, we should use food to do good and cook for change,” he said.

Acclaimed Danish chef Christian Puglisi—who operates Relæ in Copenhagen, the only Michelin-star restaurant in the world with an organic certification—talked about his ambitious project, Farm of Ideas,  in which food producers and chefs can congregate and learn from each other.

As part of this project, 2,200 sq m of dilapidated structures standing on farm and pasture will be restored and transformed into an experimental workshop, culinary school and events space.

Margarita Forés, the last speaker on the first day of the congress, talked about her journey—from a twentysomething who enjoyed cooking meals for friends in her grandfather’s country home in upstate New York in the early 1980s to learning the foundations of Italian cooking from three signoras, to running a culinary collective and then opening Italian chain Cibo, champagne bar Lusso, farm-to-table restaurant Grace Park and the entire F&B operations of Ascott in Bonficio Global City.

She expounded on the beauty and uniqueness of Philippine cuisine, touching on our penchant for sour flavor with ingredients like calamansi, dayap, unripe tamarind, guava and alibangbang leaves as footnotes.

To cap her presentation, Forés played a step-by-step video on her modern takes on three quintessential Pinoy dishes: a pan-seared Bohol marlin draped with a muscovado teriyaki glaze and miso sauce for her updated version of sinigang; local blue crab meat and fat sandwiched in a water spinach gnocco stack for kinilaw; and a savory salted egg and balut panna cotta with chicken skin, pickled century egg and soft-boiled quail egg for her nouveau take on adobo.

Just on its second edition, Food on the Edge challenges our perspectives on food. “We’re not here to congratulate each other for what we’ve done, but to discuss what we can do,” said McMahon.