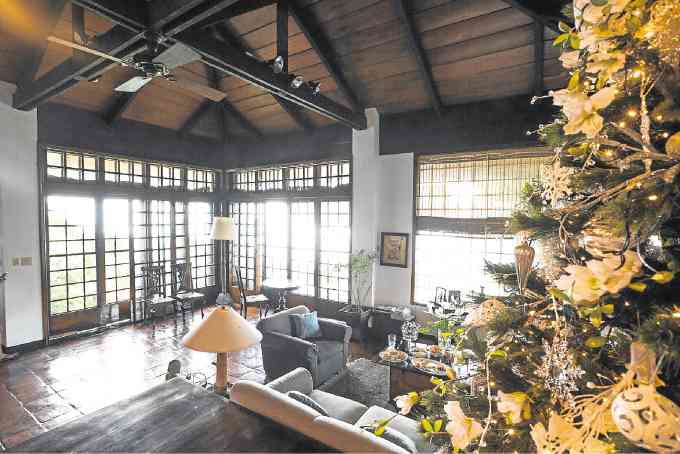 Floor-to-ceiling sliding doors that open out to a view of Taal Lake border the living room.

Rina Silayan-Go remembers her Christmases as a youngster, when father Henry Go would ask his children to gather before the fireplace of their vacation home in Tagaytay City on Christmas Eve to wait for the stroke of midnight.

Only after the clock struck 12 could Rina and her siblings open their Christmas presents. It was part of the family’s holiday tradition where, weeks before, all family members drew lots for the name of a “baby” who would get a Christmas gift from the picker or “parent.”

“My sister Maggie always prayed that Dad would pick her as baby because Dad always gave the most beautiful gifts,” Rina recalled.

One highlight of those holidays was the Christmas tree that mom Aurora Silayan-Go would put up as early as November.  “She always had a theme. My favorite was White Christmas,” Rina said.

The fashion designer-restaurateur-Inquirer Lifestyle contributor said Aurora and her team of amateur but talented decorators would swoop down on the boxes of holiday décor and spend a whole day transforming a scrawny set of spiny stems into a sparkling and magical Christmas tree decked with snowflakes, swirly trimmings, fairy lights and shiny balls.

“It wasn’t that pretty at the start,” Rina noted. When she was still in high school, the family’s Christmas trees showcased the usual plaid ribbons and red balls.

But when the children began attending college in Boston, Rhode Island and New York, Aurora would rent an apartment in New York for the holidays and require Rina and her siblings to watch Broadway shows while on vacation.

The family’s Christmas tree waited back in Tagaytay as the whole brood gathered on the 24th in the New York apartment, waiting for midnight to exchange gifts.

“But then, mom would wake up very early on Christmas Day. She would be gone by 6 a.m. and line up in front of Macy’s where all holiday décor was offered at 50 percent off. She would buy the ones on sale and upgrade the Christmas tree in Tagaytay the following year,” Rina said.

Once the holiday season began in Manila, the Gos’ Christmas tree would sport the theme of last Christmas’ Macy’s display in New York. Rina, Maggie and brothers Jeff, Ken and Francis witnessed how the tree turned red one year, autumn hues the next, gold and then white.

“Mom would insist that each branch of the tree be fully loaded with décor and the lights twined so tightly and neatly around each branch so the wires would remain unseen,” the designer said.

Youngest brother Francis took over for a while but, after their dad died in 2014, some of the surviving siblings, for one reason or another, could no longer come up to Tagaytay to celebrate.

“In 2014, it was just my family and that of a brother’s. Last year it was just me and my two daughters. That was very sad for me.  It will never be the same,” Rina said wistfully.

And so, the only surviving daughter claimed her turn to decorate the tree this year.

Out came the long-stashed boxes of holiday trim. When the caretakers brought them out, Rina noticed how lovingly and painstakingly her mom had wrapped each bauble before hiding them away.

“Maingat siya. But there were a few pieces missing and some items were broken,” she said. Rina and Ricky, one of her mom’s trusted arboreal hands, went shopping recently for backup holiday trim.

Rina intends to use them all along with Maggie’s charger plates when she sets up the holiday dinner feast in Tagaytay on Christmas Eve this year.

A few weeks ago, Rina gave Lifestyle a preview of what awaits her brothers and their families should they decide to come this December.

She lined up appetizers such as jamon Serrano, chistorra sausage, blue cheese, brie, honey and sliced baguette and baked boursin near the fireplace where her brothers can gather on Christmas Eve.

Rina said while she and her siblings lived with their parents in Quezon City back in the day, their parents insisted that the whole caboodle come to Tagaytay on weekends.

The vacation home, with huge bay windows that frame Taal volcano and the lake, is “where mom invested all her hopes and dreams.  Everything she wanted, dito niya nilabas. All her creative juices are reflected in the plates, the furniture, the antique pieces. That garden outside with the verbena, gumamela, milflores and purple bells…,” Rina trailed off.

“I ask myself what dad and mom would have wanted. I also asked my brothers if they were coming. I just want things to be happy for my girls. I can’t see mom’s touch anymore so I want to relive how mom did everything,” Rina said.

All food featured from NIC’s.