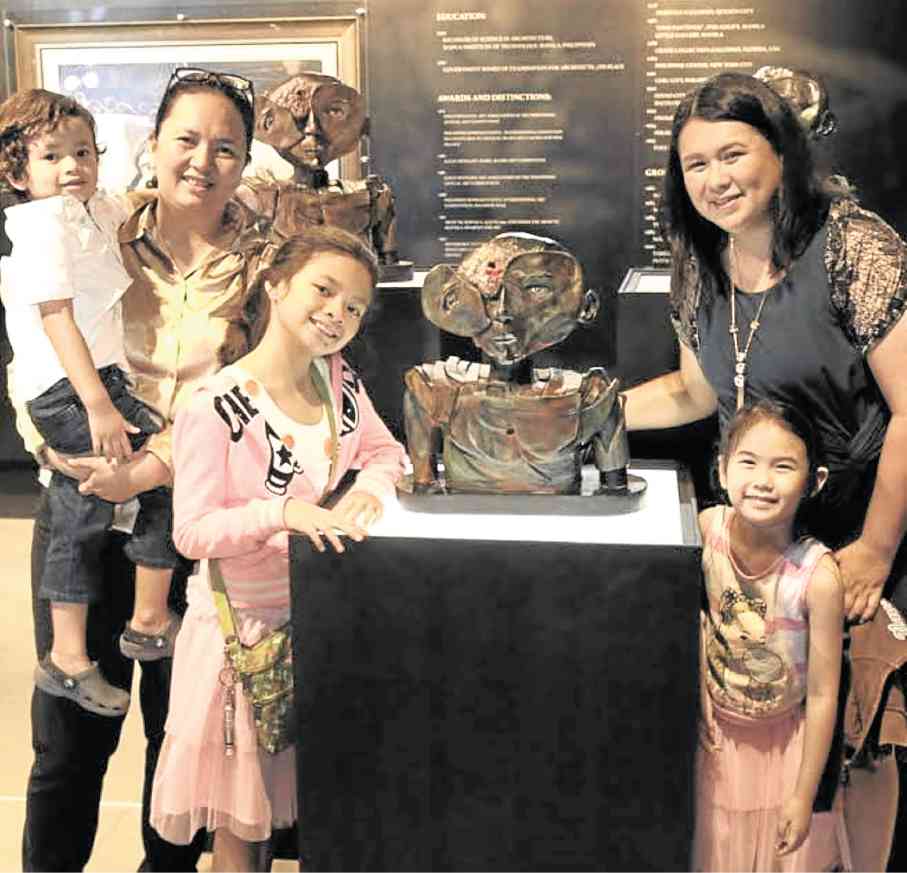 Onib’s daughters Franjo Arias (left) and Bambi Araneta pose with “The Bionic Syndrome.”Onib’s grandchildren are (from left) Lui and Isabelle Arias and Bree Araneta; not in photo is Basti Araneta.

The art exhibit was held at the Secret Fresh Gallery, occupying the entire floor of the penthouse at the Ronac Lifestyle Center in Magallanes.  Family, friends and Onib die-hards braved the rains in commemoration of his 20th death anniversary.

The program started with an invocation delivered by Life Coach Bernard Marquez. This was followed by a presentation by the artist’s widow, Bettina Olmedo, who gave the guests a brief backgrounder on the art exhibit.

Bettina credited the young and creative owner of Secret Fresh Art Gallery, Robert Christian “Big Boy”  Cheng, for conceptualizing the exhibit. The group felt that Onib’s paintings lend themselves perfectly to replication in the form of sculptures, as Onib’s paintings are truly three-dimensional, with the figures virtually jumping out of the canvas.

Bettina informed the audience that, together with the creative entrepreneur behind the Secret Fresh Gallery, her family decided to have two of Onib’s most renowned paintings interpreted in the form of toy sculptures.

The first painting, titled “The Apartment,” is recognized the world over as an iconic work of art. It garnered an Honorable Mention award at the prestigious international competition held at the Chateau Musée de Cagnes Sur Mer in France in June 1992. Onib was the very first Filipino artist to be accorded such a distinction.

The artist’s widow explained that Onib’s award-winning painting sends a message in a subliminal manner:  despite the abject poverty depicted in the Filipino family’s squalid surroundings in a cramped shanty, the human spirit still shines through.

The other painting featured in the exhibit is  titled “The Bionic Syndrome.”  Judging from its title, Onib’s painting was inspired by  top-rated TV shows between 1976 and 1978,  blockbuster sci-fi series “Bionic Woman” and “The Six-Million Dollar Man.”

Bettina’s presentation was followed by the highlight of the art exhibit: the unveiling of the toy sculptures by the artist’s two daughters, Bambi Olmedo-Araneta and Franjo Olmedo-Arias.

The art exhibit “Onib in 3D,” orignally presented at Secret Fresh Gallery, then moved to ManilArt at the SMX Convention Center, SM Aura in Taguig.