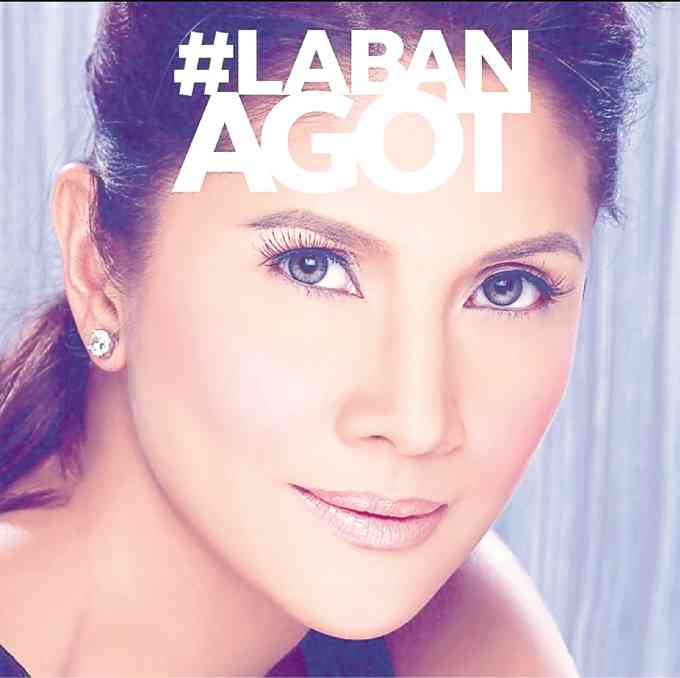 A number of memes expressing support for Agot Isidro have appeared on social media.

Life goes on for Agot

Life goes on for Agot Isidro, who, according to close friends, has been taking in stride all the brickbats that rabid supporters of President Duterte have thrown at her for daring to call him a “psychopath” in a Facebook post.

The actress is a mainstay in the cast of ABS-CBN teleserye “Ang Probinsyano.”

First discovered as a backup singer, along with her sisters Olive and Tina, for Sharon Cuneta, Agot went on to pursue a music career as a solo artist, before successfully transitioning as a film and TV actress, including stints in musical theater.

Agot’s brutal honesty in social media comes as a surprise—notwithstanding netizens’ daily rants against Mr. Duterte’s pronouncements and actions—because she has dared to directly address the President while most of her peers in showbiz would rather shut up.

“She can be very vocal about issues. Because of the extreme comments of Duterte himself, she felt the need to express her sentiment,” a close friend of Agot told Inquirer Lifestyle.

This friend described Agot as “free-spirited, funny, humble, extremely considerate,” but added, “I have never heard her make any political statement” until that Facebook post.

“Agot didn’t say anything that was incorrect,” said an observer. “She was criticizing Duterte for his lack of diplomacy and apparent display of stupidity that could jeopardize our economic relations.”

The observer, who is very active in social media, added: “When Agot said, ‘Ayaw namin magutom,’ she was speaking for all Filipinos who could be affected by a clumsy handling of foreign diplomacy. It was, after all, Duterte who said, ‘I’ll be the first one to go hungry,’ so he knew exactly where he was leading us. Not exactly responsible leadership on his part.”

Apparently Agot is nonchalant amid an orchestrated troll attack to malign her person—the latest of which is a series of fake Agot Isidro Facebook accounts.

“This is not my account,” she clarified in a post on Oct. 20. “Apparently, this is not the only one. I’ve seen a few others and have reported all. I have my voice. You have yours. Own up to yours.”

Another friend of Agot said that her supporters are being vigilant amid insults, threats and actual reprisal by Duterte supporters.

But she herself remains cool yet conscientious in her most recent post on Oct. 26 when she said, “Good morning Pilipinas!”—as a foreword before quoting author/philosopher Eric Hoffer: “Rudeness is the weak person’s imitation of strength.”