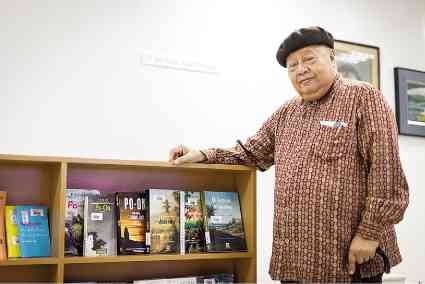 Mario Vargas Llosa is a tried and true friend of Filipino writers. When Marcos imprisoned, harassed and oppressed writers, as president of International PEN, Mario visited Manila. His presence illustrated the solidarity of International PEN with us. We owe him this debt of gratitude and welcome him warmly into our midst.

I find him the most exciting of the Latin American novelists, who I have been teaching since the ’90s. His body of work is formidable and each novel is different from all the others. The different realities he writes about have parallels in our own country, and his work serves as a source of instruction and inspiration for many Filipino writers.

Mario Vargas Llosa is one of the most universal authors in the Spanish language. Internationally recognized, he’s recipient not only of the prestigious Premio Cervantes (1994) but also of the Nobel Award for Literature (2010). With his works, he creates complete universes in which the characters are complex, ambiguous and contradictory, like in the real world. My favorite among his novels has to be “La Guerra del Fin del Mundo” (The War of the End of the World).

We are excited to bring Mario Vargas Llosa to Manila. Instituto Cervantes is not only a cultural center, it is also a space for intercultural dialogue. We want to make possible for Filipino readers to listen to a universal author who writes in Spanish.

Mario Vargas Llosa was born in Peru, and the legacy of the Americas in the Philippines is unique in Asia. Making it possible for him to return to Manila, to get to know the Philippines of the 21st century, is an important part of our objective.

Last but not least, we wanted to facilitate the intention of Philippine universities such as UST and La Salle to recognize his contributions as an author.

I think of the “versatile writer” when I think of Mario Vargas Llosa. Some novelists are happy to write variations of the same novel all their life. But Vargas Llosa has written a different work each time, each one a literary feat, a fine surprise.

He has probed the mind-set of revolutionary agents, charismatic leaders, millenarian groups, scriptwriters and their paramours, even prostitutes and macho vanguards in obscure towns. He has not hedged on issues such as sexuality, terrorism, vigilantism, militarization, crime, myth and politics, exploring their persistent impact through the dragnets of fiction.

Curriculum functionaries who are busy nagging us on how to teach literature (condensed in senior high school and purged from university altogether) should be made to listen to his lectures. People who keep babbling about the 21st century should consider what he says. I think that we can learn much from the way he regards literature as a way of understanding the crossroads and crises of our time. —CONTRIBUTED