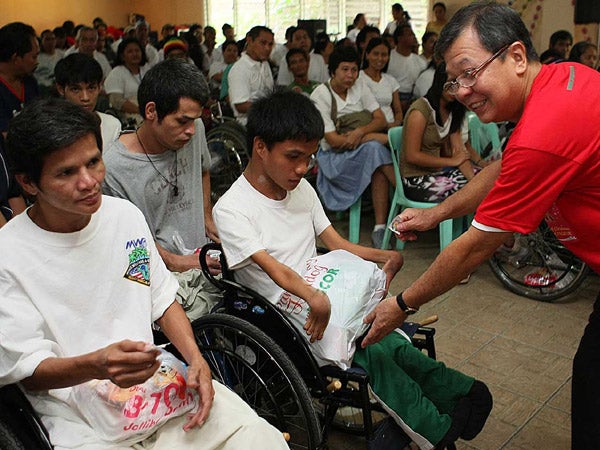 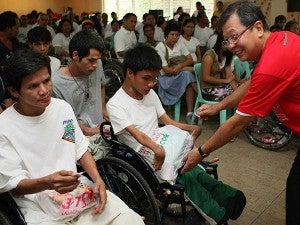 MANILA, Philippines—Marcos Rabusto has been afflicted with polio since he was two. This left him wheelchair-bound for the rest of his life.

But his disability did not stop Rabusto, 36, from pursuing his dreams.

In 2009, he competed at the Asean Paralympic Games in Thailand and Malaysia and brought home bronze and silver medals.

Rabusto was only one of 350 physically-challenged individuals at the Tahanang Walang Hagdanan in Cainta, Rizal, who benefitted from the annual Christmas gift-giving activity of the Philippine Amusement and Gaming Corporation (Pagcor).

Naguiat said the event also coincides with the 25th year anniversary of the state-gaming  firm.

Pagcor has allocated a total of P25 million for the project, which is expected to benefit more than 7,000 less fortunate people from 36 charitable institutions nationwide.

Naguiat said they chose Tahanang Walang Hagdanan as the first beneficiary of its Pamaskong Handog project “to symbolize the agency’s long-standing commitment to help the less privileged sectors of society such as persons with disability (PWDs).”

Pagcor has provided assistance to the institution in the past by supporting its “Gulong sa Pagsulong Project,” which helps PWDs avail of mobility aids like wheelchairs, canes and crutches.

Naguiat said he would also request the Department of Environment and Natural Resources (DENR) to allot some of its confiscated logs to the Tahanang Walang Hagdanan for its woodworking activities, which is one of the major sources of livelihood of its workers.

The DENR is one of Pagcor’s partner agencies for the PNOY Bayanihan Project, whose major objective is to make use of the confiscated logs in manufacturing school desks for the country’s public schools. PAGCOR provided a P100-million funding for the said project.