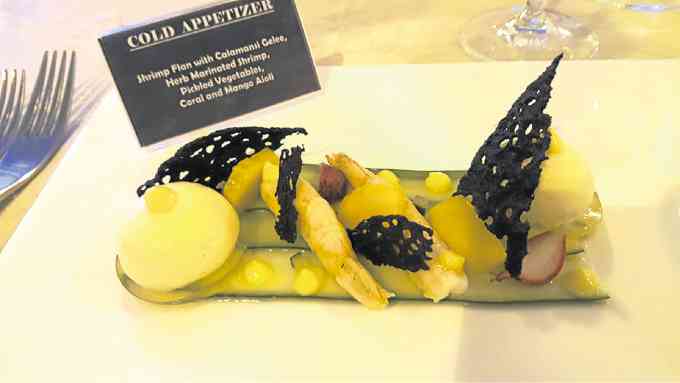 All contests were cancelled on the second day of the three-day event, since there was no power at the venue and vehicles were not plying that day to bring in the participants.

Baguio was the final venue of NFS, a competition that travels through the country’s major islands. The Luzon leg is always held in Baguio; the Mindanao leg, in Cagayan de Oro; and the Visayas, in Bacolod and Cebu, each city hosting every other year.

Hotel and restaurant associations in each leg take care of organizing and logistics.

The contest is a hive of activity. The tables are adorned with flowers and elaborate arrangements.

Bottles fly through the air and sometimes are caught to be thrown again during flairtending.

Cakes are not made for weddings or birthdays, but to be judged by professional pastry chefs on originality and technique.

Future and current baristas and bartenders make classic orders and then let loose their creativity with original concoctions.

Professional cooks and culinary students do dishes under time pressure.

Consensus judging is the norm. Judges note how contestants work and debrief competitors on what they did right and wrong.

Myrna Segismundo, who established NFS, said the competition should be a learning experience; the interaction between judges and participants is thus vital.

As a judge in the Klasika Kulinarya contest, which asked students and pros to cook kaldereta, I was disheartened to find out that a majority of the 29 entries didn’t even stew their meat, a basic procedure of the dish. I think most of contestants were more concerned with the plating, when “taste” was the most important rating.

Then there was the tendency to “deconstruct,” interpreted by novice and even professional cooks as separating ingredients on the plate. It is much more complicated than that, and can involve changing the physical form of the dish’s elements while retaining the flavors when taken together. Think Ferran Adrià.

Every debriefing seems to have the same message from the judges. Better stick to the traditional way of doing a dish and honing basic skills. Make sure your physical appearance is neat, a toque or cap used, and shoes not open-toed or high-heeled. Believe me, judges notice these things and will deduct from scores.

But the truly “national” competition is Chef Wars, which is open to both students and pros. A team of three is asked to create three dishes using a required ingredient and employing classic French techniques that are taught in culinary schools and are standard operating procedures in professional kitchens.

Luzon, Visayas and Mindanao have early elimination rounds to determine the teams to compete. The winner then represents the region.

Chef Wars this year was held in Baguio. This most awaited competition had representatives from each region flying or going on a road trip to attend and boost the morale of their teams.

After the cooking and the judging, Mihca emerged as the Chef Wars champion, producing an exceptional cold appetizer of shrimp flan, a hot appetizer of anchovy glazed shrimp, and a main course of shrimp and lapu-lapu roulade.

Coach and instructor Michael Navarra couldn’t contain his joy when it was announced that his team was Chef Wars champion.

Next year, the finals of Chef Wars will be held in Cagayan de Oro. The hotel and restaurant association there said they will start early to drum up interest throughout Mindanao.