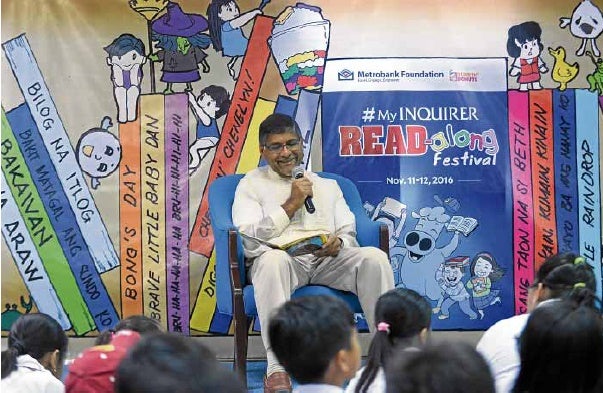 It did not show, but Jemimah Rose Pestaño confessed that she was nervous when she took the stage in this year’s #MyInquirer Read-Along Festival Storytelling Competition held Saturday at the Inquirer Makati office.

So it was a “shocked” Pestaño who stood up to claim the Festival Queen title for her school, the Optimus Center for Development.

“At last!” exclaimed her coach and mentor Lorna Matienzo, who has been training award-winning storytellers from their school since they first joined the 2014 edition of the storytelling competition, with Optimus student Noah Roa finishing 1st runner up in 2014 and 2015.

But third time’s the charm for the Binangonan, Rizal school, thanks to Jemimah whom Matienzo described as “very easy to teach, and never gets tired of practicing.” The winner’s grandmother, Guia Tacsagon, who was in the audience meanwhile thanked “Teacher Lorna for her unwavering support and dedication.”

Quiet by nature, Jemimah described reading as her only hobby. “My favorite books are Filipino books about legends and myths,” she said, citing “Alamat ng Gagamba” as her favorite story.

The contestants read “Nang Magkakulay ang Nayon” by Susan dela Rosa Aragon, a story about how a town changed with the arrival of a painter.

The competition capped the two-day festival which was co-presented with Metrobank Foundation and sponsored by Dunkin Donuts.

Earlier in the morning, Inquirer President and CEO Alexandra Prieto-Romualdez opened the second day of the Festival and introduced as a “special, special guest” Ambassador Ahmad, who read in Filipino Mike Bigornia’s “Si Putot.”

“The power of storytelling is compelling for kids and adults,” said the Ambassador who also read for the Festival last year.