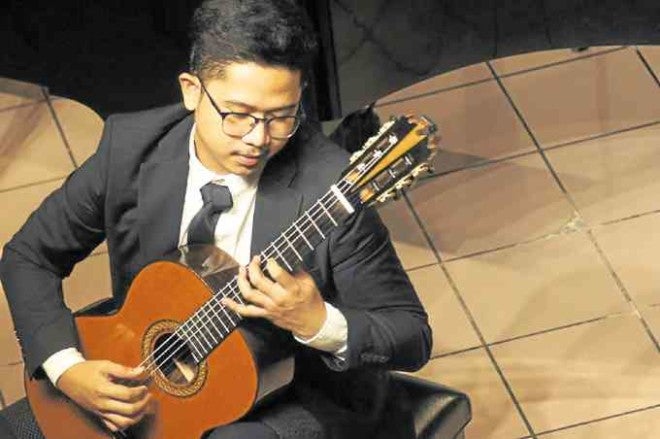 An evening of spectacular classic guitar

Ayala Museum enjoyed a full crowd with the notable presence of music lovers not identified with the classical guitar.

How a baby-faced David Jae Laza could explore the Indian-inspired “Ananda” by Moller and thoroughly delineated its mystery was a tribute to his immense interpretative powers.

Aaron Aguila III gave us the beauty of contrasts in Bach’s Fugue BWV 998 and Turina’s Sonata, Op. 61 and ended with his own piece Reverie.

Moreover, one saw an exciting enfant terrible of the classical guitar in the person of Sting Asistores, who displayed a close affinity with his instrument in Koshkin’s “Usher Waltz” and showed an advance level of maturity in Barrios’ “La Catedral.”

The four pieces by Machado, Dyens, Lauridsen and Piazolla displayed the musical versatility of the UST Guitar Octet, who gave the audience an unusual and exciting range of the classical guitar as an ensemble.

Lasting close to three hours, the concert proved our youth had the talent and special gift for music in classical guitar. Certainly, they deserve everybody’s support especially from the country’s cultural institutions.

The heroic efforts of the Independent Philippine Art Ventures Inc. (in partnership with Ayala Museum) to promote the classical guitar are paying off and the concert gave us a good sampling of the country’s major talents. —CONTRIBUTED