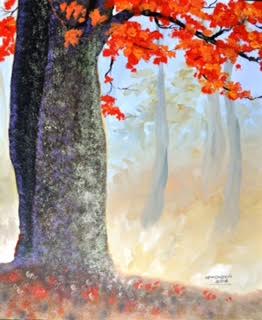 "The Trees" by Dr. Orestes Monzon

From clinical gaze to artistic eye

Physicians have turned to art-making to relieve themselves of the drudgery and stress of the medical profession.

Unique among physician-artists, Dr. Orestes “Resty” Monzon has ventured into the visual arts by starting from a related field—radiology and X-ray analysis. Viewing negatives of the human anatomy, its nooks and crannies, he has shifted quite comfortably to photography and painting.

Newly retired from the Philippine Heart Center where he had been physician for 37 years, Monzon is still with the University of Santo Tomas Hospital as head of its new nuclear medicine department. He has always been with UST, having graduated from there and been a member of its medicine faculty for 32 years now.

Monzon has a painting exhibit at Philippine Heart Center’s The Art Gallery with his artist friend, Angelito “Jo” Florendo.

Titled “The Woods Are Lovely, Dark and Deep” (a line from a Robert Frost poem), the show is the fourth collaboration between the two artists (they have had exhibits this year at SM Megamall’s Art Asia Gallery, Chef Jessie’s at Rockwell Club and Art Wall at Cardinal Santos Medical Center).

“The Trees” series of paintings began when “Doc Resty” vibered a copy of his work to his US-based daughter, Christelle, who asked to reserve the piece for her. She named it “The Giving Tree,” from a popular children’s picture book written and illustrated by Shel Silverstein (Harper & Row, 1964). He considers it his most significant artwork.

Dr. Froilan de Leon, a radiology student of Monzon, said of his professor: “He taught us to visualize body structures using varying shades of gray. I believe his work is a product of his familiarity with the lightness and darkness of a painting, the shadows it casts when light falls on a surface or a still life. In contrast to the darkness of an X-ray plate, however, his art piece explodes with color.”

On doctors and artists, arts editor M. Faith McLellan commented: “The clinical gaze has much in common with the artist’s eye.”

While still in medical school, Monzon and his friends loved visiting art galleries and museums.

Monzon went to Germany for training in nuclear medicine, came back in 1979, and got married in 1980.

Missing the museums of Europe where he came to love the Impressionists like Renoir, Monet, Manet, Cezanne, Degas and Mary Casatt as well as Gustav Klimt, Egon Schiele and Andrew Wyeth, he found himself enrolling one summer in a painting class under Fernando Sena.

“I found myself in a class of preschool and elementary-school children,” Doc Resty confessed. “Needless to say, I was the oldest in the class.”

Recently, he was pleasantly surprised to find his old sketch pad.

“In my old works, I see the potential in a young physician’s dream to become an artist,” he said. “The artist in me bloomed, later than sooner,” he added.

Monzon is also a photographer. He held his first exhibit of photographs and radiography photo experiments in 1974.

It would take three decades before he would exhibit his photographs again. “Ordinary Photographs,” “Some People, Some Photographs,” “Windows, Doors, Narrow Streets I & II” are just four of his solo photo exhibits.

In 2011, he worked with Florendo for an exhibit, “Feeding Doves.” Florendo selected photographs from the doctor’s cache and rendered them into paintings.

“That exhibit of paintings from photographs,” said Monzon, “sort of ushered in a new genre, dubbed as ‘Paintographs.’”

The collaborative exhibit was a hit.

In 2013, a similar exhibit was mounted; this time Monzon collaborated with more artists such as Vic Bachoco, Denis Diego, Jun Rocha and Bong Sunga.

Monzon said he remained excited with his medical practice—caring for his patients and helping them receive adequate health care through his specialty.

He said he was looking forward to the new UST Hospital building, which “will devote the entire second floor to the Department of Radiology and Nuclear Medicine, and the new equipment to accommodate new diagnostic modalities like CTs, MRI, diagnostic X-rays, gamma camera, and possibly a PET CT.”

He also has a radiology and nuclear medicine clinic at Cardinal Santos Medical Center. He is a member of the board of radiologic technology of the Professional Regulation Commission.

Monzon has been holding 25 Raffle Tickets of 25 Paintings for 25 Winners since 2012. Beneficiaries have included Verbum Dei for its missionary work; Diocese of Novaliches for its ministry for the disabled; Maningning Miclat Art Foundation Inc. for its art contest; and Kammerchor Manila for the choral concert it held recently at Santa Rita de Cascia Parish at Philamlife Homes in Quezon City.

Monzon said he dreamed of “collaborating with a chef to open a restaurant or coffee shop with an active art gallery. It would hold art exhibits, poetry readings, book launches, short plays, excerpts from musicals, and even mini concerts. It may even feature lectures on photography, acting.”

The last time I wrote about Monzon after his retirement at 65 in 2012, he dreamed of enrolling in a painting class.

Now, his yet another dream may not be far-fetched after all!

Author is author of “Soul Searchers and Dreamers: Artists’ Profiles, a coffeetable book published by the Maningning Miclat Art Foundation Inc. and Erehwon Center for the Arts.