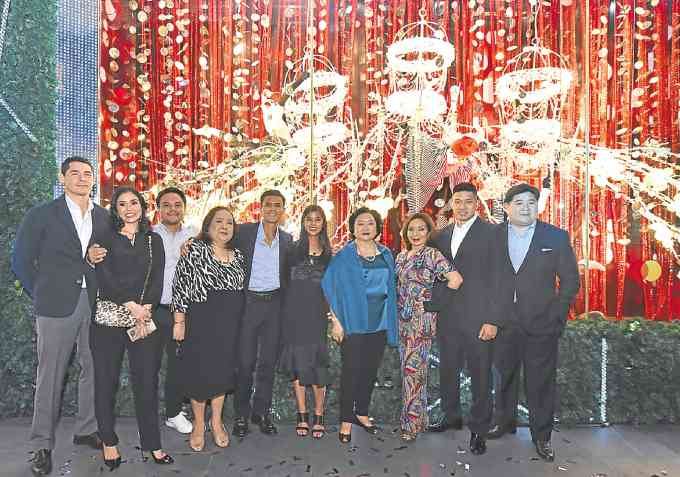 And so, dahlings, Rustan’s welcomed the Yuletide season last week with a grandioso unveiling of its magnificent display window along Ayala Avenue.

Members of the Tantoco famille were present, led by CEO Zenaida Tantoco, wearing a fab gold pearl strand from Jewelmer.

The event started with a sit-down dinner and musical numbers.

And then everyone was escorted to see the unveiling of the windows. There were gasps of delight, palangga.

Surely this Christmas will be extra memorable because of Rustan’s. Bravo!

Theme this year was “Dance with Life.”

“As we step up and develop greater versions of ourselves, we gracefully move with the trials of love and life,” said contest director Carla Cabrera-Quimpo.

She added: “We reinvent our rhythm to overcome hurdles and achieve a more empowered life at work, play, and family.

“Women can achieve their dreams and be the best versions of themselves while being a full-time wife or mother.”

Mrs. Philippines Globe is a national beauty contest founded in 2012 under the auspices of Mrs. Globe, an international competition founded in 1996 for married women and single mothers.

The event was produced by EVI Marketing Communications.

St. James Bazaar, the biggest Christmas market at St. James The Great Parish in Ayala Alabang, will be held Nov. 24-27. It is on its 25th year.

More than 500 concessionaires will gather under huge tents at the St. James parking lot and the Cuenca Community Center. To be offered on sale are export overruns, imported fashion accessories and various Christmas gift ideas.

The bazaar will likewise have games and raffles; major prizes will be given away every day.

The good news is that the bazaar makes it easy for customers to pay with Mastercard and Visa or withdraw cash from the ATMs of UCPB Mobile, Metrobank and other banks.

Free shuttle service will be provided to and from the parking lot and the bazaar.

Proceeds from the four-day bazaar will benefit the St. James Parish Foundation.

Mimi Valerio recalled that St. James Bazaar was established in 1991 to raise money to build St. James the Great Parish Church in Ayala Alabang Village, whose architecture was inspired by the grand churches in Europe. The project was completed in 1995.

“Over the years, income from the bazaar has allowed the foundation to acquire the St. James parking lot and finance parish programs,” said Valerio’s daughter Nikki.