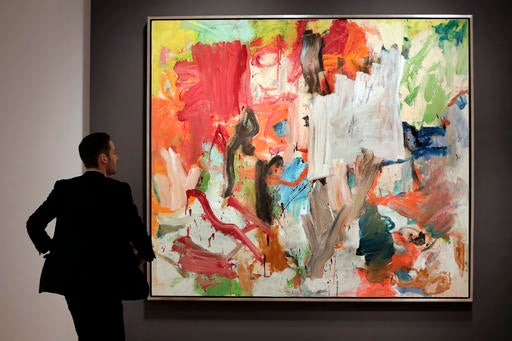 In a Friday, Nov. 4, 2016 file photo, William de Kooning's "Untitled XXV" is displayed at Christie's, in New York. Christie's predicts that “Untitled XXV” will set a new auction record for a work by the abstract expressionist artist at its sale Tuesday evening, Nov. 15, in New York. (AP Photo/Richard Drew)

NEW YORK — A large painting from one of Willem de Kooning’s most productive periods could be sold for as much as $40 million at Christie’s auction of contemporary art.

Christie’s predicts that “Untitled XXV” will set a new auction record for a work by the abstract expressionist artist at its sale Tuesday evening in New York. When the painting was auctioned in 2006, it sold for $27.1 million, then a record for any work of post-war and contemporary art.

Another major work at the auction is a painting by the German artist Gerhard Richter now owned by British singer-songwriter Eric Clapton. Christie’s experts believe “Abstract Painting” will sell for around $20 million.

De Kooning’s “Untitled XXV” was executed during a burst of creativity in the mid-1970s, following a dry spell in the late 1960s, when the artist produced a series of large paintings that were inspired by the landscape of Louse Point in Springs, New York, a bucolic hamlet in East Hampton where he moved to in 1963.

“In the ’70s he found new love … and that gave him inspiration, but also his arrival in Springs where he designed and built his own studio. He had fabulous light and he was madly in love,” said Brett Gorvy, Christie’s head of post-war and contemporary art.

“He suddenly found his voice again. He described this 1977 period almost like a gambler throwing dice, and each time he was a winner,” Gorvy added.

An exuberant work that bursts with color and textural brush work, “Untitled XXV” measures 77 inches by 88 inches and is the artist’s largest painting.

Experts consider de Kooning’s work during this period “his most successful,” Gorvy said. “It was a phenomenal period of creativity where he basically produced the best paintings since the work he was doing in the 50s.”

“Untitled XXV” is being sold by a European collector who purchased it privately in 2008. The current auction record for a de Kooning is $32 million for another painting from 1977. That record was set in 2013.

Richter’s exuberantly colorful and textured oil-on-canvas belongs to a four-part series from 1994. One is in the joint collection of the Tate and the National Galleries of Scotland.

Last year, a 1986 painting by Richter, also called “Abstract Painting,” sold for $46.3 million. It’s an auction record for a work by a living European artist. TVJ