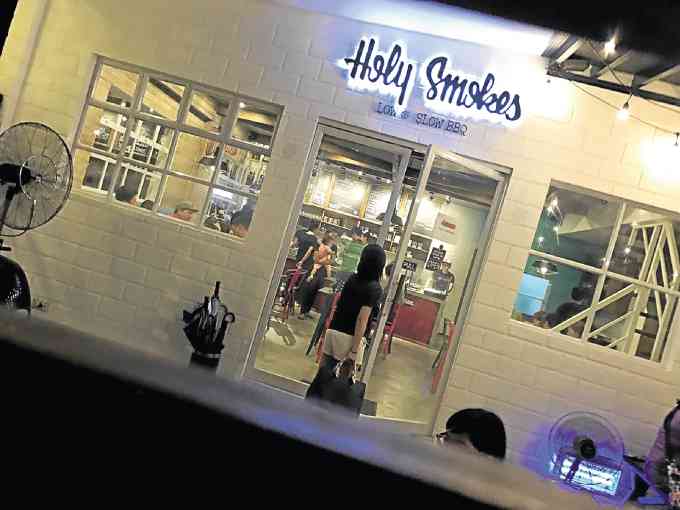 The best of the American south in the middle of Makati

As someone who writes about restaurants, I’ve often been asked which is easier to do—the good review or the bad review.

My reply, which you’ll notice cleverly sidesteps the question, is that they’re both relatively easy, compared to the average review of the average restaurant, which is a bore to write and a bore to read, and takes up a lot of column inches because I have to sift the good from the bad and qualify my assessments.

The only problem with a good review is that it tends to be rather short. There’s not much to say other than go there and check it out.

So, if you’re simply looking for a restaurant recommendation, you don’t have to read much further. Holy Smokes on Matilde Street, down the road from Tilde in Poblacion, Makati, is an absolute gem of a restaurant.

It opens at five in the afternoon and this is the best time to go, when the brisket has just come out of the smoker, except that everyone knows it’s the best time to go, so you may have to fight your way through the cars sniping for parking and the other diners circling like a pack of lions after a kill.

Not that they’re rude or anything. In fact, one of the most charming things about Holy Smokes is that it still has the feel of a community restaurant, of people who really love to eat, or Rockwell and Bel-Air residents who have wandered over in Sunday afternoon shorts and loafers.

You’re bound to see people you know from the neighborhood. With Tilde down the street and several establishments within walking distance on the narrow streets, Poblacion is starting to look and feel like the Malate of days gone by.

The luminaries of that Malate scene have gone on to bigger and shinier venues: Colin Mackay, most notably, helming probably the most beautiful restaurant in town.

So it’s a new generation of restaurateurs and bohemian types now setting up bed-and-breakfasts and cafés and restaurants and gourmet shops.

The genteel middle-class homes of the area are either aghast at the invasion, or rubbing their hands gleefully at the increase in their property values.

There’s very little parking, but it’s easy enough to park a few blocks away and then walk, as we did, with baby and child in tow. There are only a few tables in the air-conditioned area inside, but the outside tables are pleasant enough at this time of year.

When we arrived at half-past five, there was already a queue at the counter and the chunks of brisket were being carved at a furious pace, gleaming pink and oozing gently like a sigh. I asked for recommendations and the man behind the counter (I think he was the chef) advised 300 grams of brisket, 300 grams of pork ribs and half a chicken for four people.

This doesn’t sound like too much (your average steak is about 250 grams) but this is smoked meat, packed with flavor that punches you in the face, and deceptively tender connective tissue and tendons and fat that you can cut with a spoon.

I would go with about half the amount of meat and then fill up with the excellent side dishes (coleslaw, baby potatoes, macaroni and cheese, rice, cornbread and some more that I forget).

American barbecue is a dark art, steeped in lore and myth and macho guys fiddling around with their smokers in the back-yard, and time-honored restaurants whose pits have been dishing out the stuff for generations. There’s Kansas barbecue, which I’m more familiar with, and Texas barbecue, which itself has many variations—there are as many kinds as there are chefs.

The owner told me that they did Texas barbecue, using a combination of santol and caimito wood, and smoked the brisket for about 12 hours, the pork ribs for nine, and the chicken for six hours.

In the meantime there are no plans to open earlier than five o’ clock, because then they’d be smoking all day long—not a terrible idea, if you ask me, but I guess these good people have to sleep at some point.

A proper barbecue is cooked by indirect heat, but the difficulty is getting it to cook to the right doneness without drying out the meat; also because it’s hard to gauge the doneness underneath the black charred exterior. Modern thermocouple probes with a digital readout help, but I’ve never been able to get it right.

I’m sure they’d be amenable to a driver coming by (or for that matter, an energetic and spry member of the household on foot) to buy a quarter kilogram of brisket or ribs for the evening meal to be had at home. But part of the fun is the back-yard feel of the place.

With a glass of iced tea, this is the best of the American south, in the middle of Makati. —CONTRIBUTED