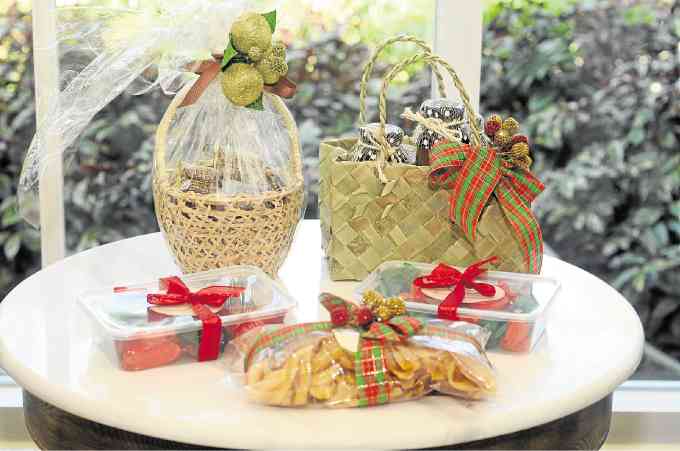 By Dec. 1, many of the Gourmet Corner itemswill be packed or beribboned and ready for giving. —PHOTOS BY ARNOLDALMACEN

Bettina Osmeña comes to the rescue of harried homemakers

The split-level space is small, at 33 square meters, with refrigerated display cases taking up two of the walls, and three tables seating  a total of eight.

The compact size, however, is no problem for owner Bettina Osmeña. After all, the bulk of Gourmet Corner’s business consists of frozen takeout tubs of her Beef Bourguignon, Korean Beef Stew and Lamb Curry, among others, that are cooked in her kitchen by staff she has trained.

The plan to open her own space cropped up in 2015. By then, Bettina had been joining weekend bazaars and her food had already built a following.

Her Beef Bourguignon is braised in red wine and flavored with garlic, onions and a heady bouquet garni (bundled herbs). Her Lamb Curry is tender and tasty with none of the gaminess one would expect.

At Gourmet Corner, customers can have their purchases heated and served with a cup of steamed rice.

“I use only the best ingredients, including imported olive oil and canned San Marzano tomatoes,” she told Lifestyle. This plum tomato variety is considered by chefs to be the best of its kind.

Before joining bazaars, Bettina, the wife of former senator Sergio Osmeña III, had already been importing these and other products for her company Euro Fine Foods Specialist, a food distributor.

“I already knew last year that I would be opening a store, but I bided my time and waited for the perfect spot. I learned that this space, which used to be occupied by Le Coeur de France, was available,” Bettina said.

“I think my concept clicked because it didn’t directly compete with the other tenants at San Antonio Plaza. I offer a mix of cooked and frozen food as well as items that can be easily cooked at home.”

She invited bazaar regulars—those whose food she liked—to consign their bottled or cooked and frozen items. She also tapped famous home cooks and bakers, popular market vendors so now customers don’t have to go all the way to Valle Verde, for instance to buy ensaymada from Mrs. Cunanan,  or drive to   San Andres market for Aling Auring’s beef tapa.

In the three years she has been joining bazaars, Bettina has come to know her customers—many of them strapped for time and want food they can quickly heat and eat or serve  their families.

“One of the biggest surprises was finding out that my clients include moms with more than two kids.

“They’re really time-poor. They work, often too tired to cook or prepare baon for their children. Our lasagnas, baked spaghetti, chicken tocino and homemade corned beef are popular with them.”

By Dec. 1, Gourmet Corner will sell snacks and savories in holiday gift wrapping.