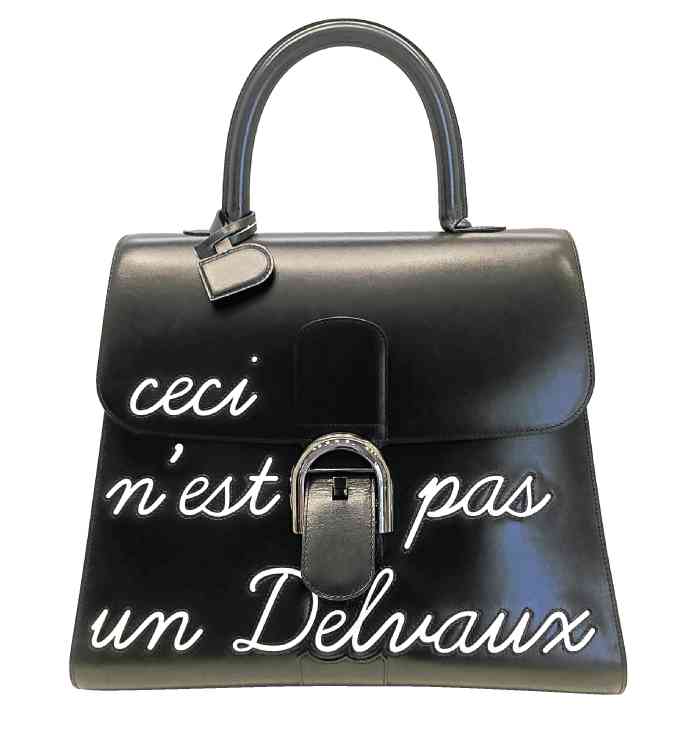 Ceci N’est Pas un Delvaux (“This is not a Delvaux”) is a rebellious take on Le Brillant, one of Delvaux’smost distinctive, classic styles from 1958.—CHECHE V. MORAL

As it enters a global market dominated by brands with high-budget advertising and high-profile celebrity marketing, Belgium’s house of Delvaux faces an extraordinary dilemma: While it’s the oldest fine leather goods luxury house in the world, some of even the most voracious luxury goods consumers on the other side of the world have never heard of it.

The purveyors of Delvaux (pronounced del-voh) don’t take offense, however, as they acknowledge that the Belgian maison is, in fact, the “oldest startup” in the world, at 187 years old—and is only just beginning to break into global renown. And it’s doing so in the most modern and audacious ways.

Take, for instance, its Ceci N’est Pas un Delvaux handbag. Boxy and structured with a simple D-buckle closure, it is the sophisticated, lady-like bag your elegant grandmother might have carried on the crook of her arm in her youth.

Except that this one is somewhat defaced, with what looks like graffiti, in neat, white cursive sewn across the fine black leather: This is most definitely not your granny’s purse.

It was a bold move, but Christina Zeller knew instinctively that the handbag, known by the scribbles, Ceci N’est Pas un Delvaux—French for “This is not a Delvaux”—was the perfect illustration of what she envisioned for the brand, to become relevant again for the modern consumer.

It’s the artistic director’s rebellious take on Le Brillant (bree-yont), one of Delvaux’s most distinctive, classic styles from 1958—a fine embodiment of the balance between timeless and spirited, elegant and humorous, modern yet traditional in its fine craftsmanship.

“There’s a positive effect of being new in the market,” said Zeller in an exclusive interview with Lifestyle at Delvaux’s Southeast Asia flagship boutique in Singapore’s Scotts Square.

“Customers are spoiled and always looking for something new. Delvaux has that long history, traditional craftsmanship  and extraordinary quality. Young customers want something different from their mother’s—something classic and timeless, but less institutional or conventional.”

Delvaux was founded in 1829, a year before Belgium declared its independence from the Netherlands. In 1883, it became the supplier of the royal court.

Since it was acquired in 2011 by brothers Victor and William Fung of Hong Kong, whose luxury goods investment firm also owns French labels Sonia Rykiel and Robert Clergerie,

Delvaux has been quietly coming out of its anonymity.

To head its creative team, it tapped Zeller, an old-timer at high-profile labels like Karl Lagerfeld, Christian Lacroix, Moschino and, most recently, Givenchy, where, for 10 years, she helped create  many cult purses.

Even as the Delvaux archive has some 3,000 vintage styles to reference from, Zeller wasn’t required to revive or reintroduce them. She proceeded with some of the classics, anyway.

It was a good call. Though it also has soft styles, Delvaux’s architectural and structural shapes have been a hit in Asia, which accounts for 65 percent of the brand’s business. While Europeans prefer soft, functional styles congruent with the casual-chic concept, Zeller observed that Asian women like their purses more dressed-up and sophisticated.

“The beauty of a classic shape is that, you can dare a lot,” said Zeller, who has been the de facto spokesperson of the brand. “You can be bold and audacious, but remain elegant… I think you can combine extreme quality and fantasy.”

Since Delvaux isn’t a fashion brand, Zeller is freed from the pressure of having to churn out a new bag each season. Make that a new “It” bag each season, which is the case with high-fashion labels.

“We don’t do ‘It’ bags because it’s very dangerous,” she said. “Many brands are very successful for three years because of an ‘It’ bag. Then after that, what’s next? We’re never under pressure to launch a new bag every three months because of a catwalk show… Luxury is freedom.”

The Delvaux business is purely handbags with a few small leather goods, including a handful of styles for men. There are no plans to launch a full lifestyle line.

In the Philippines, Delvaux will be carried by homme et femme in 8 Rockwell, Makati City.

“Our challenge is to grow but to remain very exclusive and discreet,” said Zeller. “We also like to talk directly to the customer, which is more appropriate for an exclusive brand. It’s difficult to pretend that you’re exclusive when you have a shop in every main street and corner, which is the case for some brands in China.”

It also limits the number of handbags, though a wait list isn’t part of the strategy.

“We could sell 10 times more of the Ceci N’est Pas un Delvaux.  But it’s not respectful to oversell some products.”

Beautiful inside and out

All bags are handcrafted in Belgium and France. Each is created by one craftsman from start to finish. A Brillant can take up to nine hours to make, and Zeller proudly said that each bag is beautiful inside and out. All these come with a corresponding price tag: a mini Brillant in calf leather starts at about north of P200,000.

“We are very ambitious for the brand, so we dream of the most sophisticated customers who understand the beauty of the bag,” she said.

“A Singaporean woman wrote on her Instagram, ‘Delvaux is a brand for a woman who doesn’t need a brand.’ We’re lucky because a new generation of Asian customers sees that. I’m often asked if we do editions just for Asia. It’s not relevant anymore. People travel a lot. Twenty years ago, if it was expensive, it was luxury. Not anymore. Asians now value history and craftsmanship more than Europeans.”

For now, the brand’s goal is to stay on course, to reinvent without becoming tacky or ordinary, Zeller said.

“If you’re never in fashion, you’re also never out of fashion,” she added. “Our goal is not a big hit, but a story that’s successful and long-lasting.”