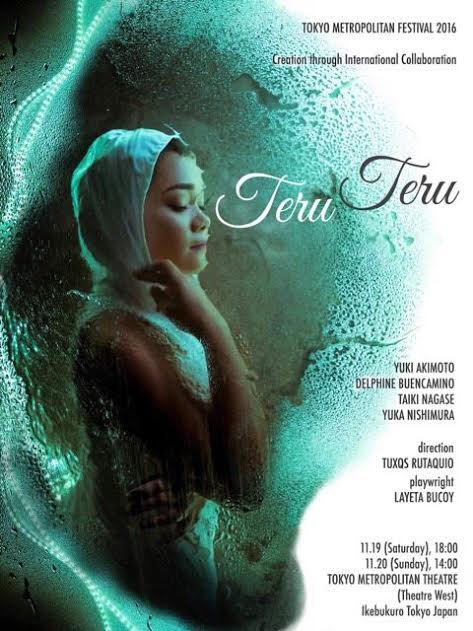 Because of highly successful collaborations that started at the annual Virgin Labfest about a decade ago, playwright Layeta Bucoy and actor-director Tuxqs Rutaquio have come to refer to each other as soul mates.

Now their newest work, a full-length play called “Teru Teru!” will have its debut performance this weekend at the Tokyo Metropolitan Festival 2016, an urban multidisciplinary arts festival.

“‘Teru Teru!’ draws from myths and characters associated with rain, a culture shared by Japan and the Philippines,” explains Bucoy. “The story was created from an ‘inspiration board’ covered by the actors with materials such as illustrations and past memories.”

“Interspersed with elements of haiku, which each member also tried their hand at during the creative process, the piece presents a spectacle of teru teru bozu—a symbol of hope—shining bright. Teru teru bozu are handmade dolls made from white paper or cloth for good weather.”

Delphine Buencamino appears in the play along with three Japanese actors—Yuki Akimoto, Taiki Nagase and Yuka Nishimura. She essays two roles—the mother of the girl promised to be wed to the landlord; and Malyari, the goddess of rain and love.

The arts festival’s aim, according to its website, is to present the appeal of Tokyo’s arts and culture in a comprehensible fashion.

How Bucoy and Rutaquio became involved in the Tokyo festival dates back to five years ago when Rutaquio started participating in the event. He was initially invited to participate in an arts camp; on the second year, he was invited to represent the Philippines in the organizing committee.

“On the third year, I did a presentation of theater for development, with forum theater as a device for Supertyphoon ‘Yolanda’ survivors, which I did with Tanghalang Pilipino,” Rutaquio said.

Then in 2015, the festival organizers asked him if he could direct a 15-minute piece. Aside from the Philippines, there were representatives from Taiwan and Indonesia. For 2016, all three participants were asked to do a full-length version of the short pieces they did last year.

“I love working with Japanese actors—my assistant directors from last year to this year, my interpreters and staff who helped us mount the piece from a 15-minute piece to this year’s full-length,” said Rutaquio. “I admire their discipline and have learned a lot from their culture. Being in a different environment has changed me as a director in terms of process and how I see the world.”

After Tokyo, if logistics permit, Rutaquio and Bucoy  hope they can bring “Teru Teru!” to Manila. —CONTRIBUTED