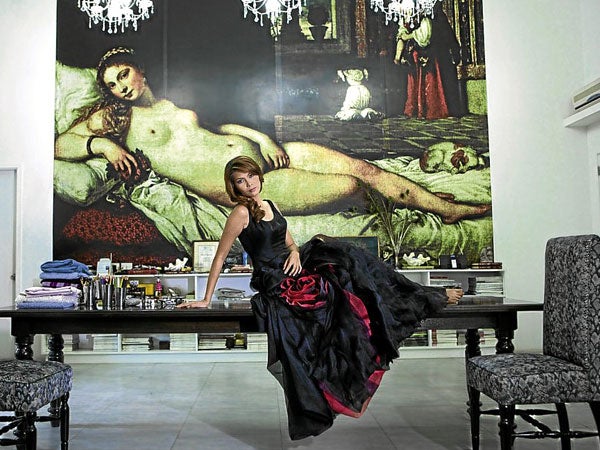 LOUNGING on a velvet chair in an orange jersey maxi dress and a neckpiece adorned with a gold serpent, designer Arcy Gayatin looked as chic as ever, and she pulled off the look effortlessly. As I walked up to her, I was reminded of Jean Cocteau’s wise words: “Style is a simple way of saying complicated things.”

Perhaps that is what sets some designers apart—their ability to translate their musings and ideals into clothes, but still in a manner most women can relate to.

As Arcy Gayatin, a member of the Fashion Council of Cebu, celebrates her 25th year in the industry, she recalls those times when her mom would have clothes custom-made, and when she would make doodles and sketches even in class, which fueled her passion for fashion.

Though she graduated with a degree in Political Science, at a very young age, she was already exposed to fashion, and it was only a matter of time before she would take the local fashion world by storm, one jersey dress at a time.

“It’s really about looking at your existing fabric and making it your own,” she says.

With every piece or collection, she always starts with the fabric. One such fabric she has grown to love is jersey, which she says she can easily relate to, as “it is the least needy material and requires no fuss.” This is being true to her sensible yet far from mundane aesthetic.

“Though some women think it’s unforgiving on the body, it can actually be very kind depending on the cut,” she says.

As a number of Cebuanos are making waves in the fashion industry, not only as designers but also as artisans, Gayatin enthuses: “I think it’s really in our nature to be creative. We like doing things with our hands and being productive.”

But as we all know, nothing in life comes free, and at the end of the day, fashion has to be translated into business. “I think viewing things from a business perspective is the pragmatic side of Cebuanos.”

But Cebuano or not, it’s important for designers to create clothes that they can call their own. “If you are doing a particular collection and you present it as yours, you have to be original. If it doesn’t please some people, it’s okay. At least you can proudly tell yourself, ‘This is mine,’” says Gayatin.

From genius to hideous

As I’m often tasked to cover fashion shows, sometimes I find myself noting from which collection I’ve previously seen the particular dress worn by the model traipsing down the runway. From failed attempts at a butterfly-adorned Alexander McQueen creation, to a collection with impeccable craftsmanship with John Galliano tendencies, I’ve seen my fair share of the genius and the hideous.

Though a lot of talented designers are good at echoing the latest trends on international runways, only some have really made their mark with their own design philosophies.

Gayatin says, “You need to leave a stamp. If you just copy someone else’s work, nobody will be able to identify you.”

For her latest collection, which was unveiled at the Inquirer Lifestyle’s Face-Off in Cebu, she played with textures using lace and tweed, transforming them into checks and stripes, which definitely put a fresh spin on tweed, a fabric usually considered for cooler weather.

Gayatin explains: “I experimented with the two fabrics. I tried to get the black thread out of the tweed fabric so the grays would come out, fused it with lace, and so on.”

Nowadays, she finds inspiration in her daughter Cybill. “Before, it was my mother, but now it’s my daughter, because my creations also have to be in tune with what is relevant today. The clothes should have a purpose,” says Gayatin.

When asked which designer she would like to collaborate with, she gushes, “Alber Elbaz, as it is so rare for a genius to be so talented and nice at the same time.”

As I scan the rows of clothes hung on one end of the room and the countless books that line the bottom of a gargantuan mural on her white wall, lit by the chandeliers on her ceiling, I couldn’t help but think that she, like the designer she raves about, is so talented, and yet has no airs about her; she’s unpretentious and straight to the point. She knows what she wants, which is important in knowing who one is as a designer.

Another golden rule: “You have to be very professional and honor your commitments and deadlines.”

Gayatin adds: “Designing is really discovering new things. Sometimes, even the unavailability of resources can challenge us to be more creative.”

As yet another collection is done and it is time to move on to the next, she says: “I can continue dreaming. I want to think global now.”

Let’s just sit back and enjoy the show, then.