David Rockefeller Jr.: Without art and culture, ‘everything would be gray and uninteresting’ | Inquirer Lifestyle 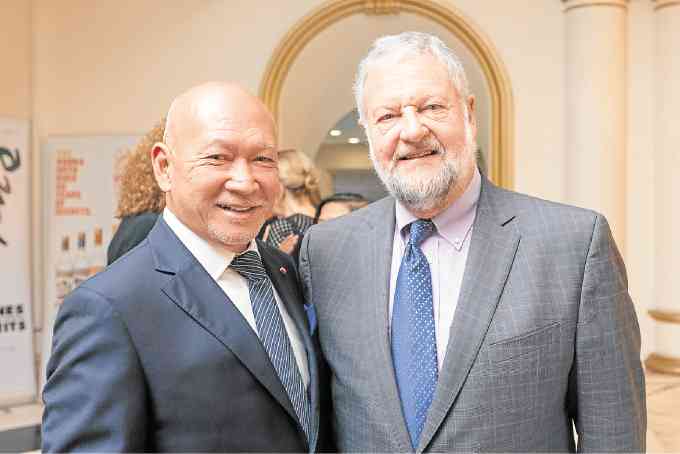 David Rockefeller Jr.: Without art and culture, ‘everything would be gray and uninteresting’

David Rockefeller Jr. nodded, and a smile played on his lips as he listened to the Philippine Madrigal Singers’ Westernized rendition of “Ili Ili Tulog Anay.”

Rockefeller, once a chorister of The Cantata Singers in Boston, studied the singers’ faces intently as they followed up with Juan del Encina’s passionate and dramatic “Mas Vale Trocar” and a delicately arranged “True Colors.” Then he stood and slow-clapped at the end of the medley.

“I’ve sung for 50 years myself so I know how hard this is,” he told Inquirer Lifestyle.

Rockefeller was at the Ayuntamiento de Manila in Intramuros Thursday night for the 15th anniversary of the Asian Cultural Council (ACC) Philippines Foundation, Inc., the local partner of the global group that provides educational and professional opportunities for artists, scholars and cultural groups through grants.

Rockefeller, from the fourth generation of the American family involved in industry and philanthropy, is one of the ACC trustees who flew to Manila last week to meet four among the latest batch of seven “exceptional” Philippine-based grantees. With him was ACC chair Wendy O’Neill, another Rockefeller scion.

John Rockefeller III founded ACC after World War II “to bring Asia and America together” by bridging the cultural gap between Asia and the West. In separate interviews at the event, the two philanthropist-descendants stressed the importance of continued global and national support for arts and culture.

(So far, ACC has provided financial and professional support for more than 190 Filipino artists and art professionals in field such as visual arts, music, dance, archeology, film, architecture and theater since 1965.)

The Philippines, Rockefeller stressed, “has a melding of so many different cultures, of the indigenous, the Chinese, the Spanish, some American… and I think that blend is what makes Filipinos so distinct, with great passion.”

Amid the anticipation by analysts of a global power shift to Asia (it is, after all, being referred to as “the Asian Century”), Rockefeller said international leaders must take care not to leave arts and culture in Asia behind in development efforts.

“It must involve art and culture.  Otherwise, everything would be gray and uninteresting,” he noted.

Rockefeller even alluded to the apparent preference of President Duterte toward a stronger alliance with China. “Although I hope the United States would always play a strong part in the Philippines, I think the Chinese offer to help with the infrastructure of the Philippines is very good. I hope it happens because you need good infrastructure to have good programs and happy people,” the philanthropist said.

ACC chair O’Neill has lived in Hong Kong for 15 years, studied Chinese and Chinese culture at Harvard University and admits to “an affinity for Asian culture.”

“I lived in China in the 1980s.  I go back to Beijing and it’s transformed.  The arts are respected and thriving and you see that all over Asia.  We just came from South Korea, and the creativity there is remarkable— the combination of technology and traditional arts in a modern way. Here in the Philippines, you have incredible talent.  It’s wonderful to come here,” she said in an interview.

In a prepared speech later, O’Neill reminded guests that “the arts are often not seen as essential to society, but arts are our heart and soul.  Creativity, innovation and design.  The arts are indispensable.”

She said ACC plans to “find more partners in the Philippines so we can reach out to the next generation of artists and art professionals, and transform the Philippines and the world through arts.”

That night, ACC Philippines trustee Malu Gamboa introduced the four Filipino grantees, including Rogelio Braga who proposed to do research on narratives from ethno-linguistic groups of communities across Southeast Asia; visual artist Aze Ong, who will conduct research on contemporary art practices and works that use textiles in the US; dance artist Ea Torrado, who will interact with key people in the field of dance in New York and Saratoga; and visual artist Irma Lacorte, who will participate in workshops on the mural-making process in the US.

Three other scholars already in the US include Jenibel Paray who has begun her fellowship at the Smithsonian Institute in Washington DC; curator-writer Lian Ladia, now completing her curatorial program at the Center for Curatorial Studies in Bard College, New York; and visual artist Nikki Luna, who recently opened her show at the Owen James Gallery in New York.

Former ACC scholars who were present that night were National Artist for Music Ramon Santos and Chris Millado of the Cultural Center of the Philippines, viisual artists Leeroy New and Ambie Abaño, choreographer and soloist Carissa Adea and music scholar Teresa Barrozo.